has been a slow week in Magic – no major announcements and no major events. We are however gearing up for Pro Tour: Kobe coming up in just two weeks, so I thought it would be a good time to look back on the history of competitive Magic tournaments in Japan.

Despite its size, Japan is Wizards of the Coasts’ second largest market after the United States. There are tons of people playing Magic out there. Japanese gamers have embraced Magic and even ended up exporting some of the other most popular collectible card games back to the United States. WOTC’s own next big hit – Duel Masters – was released in Japan first and will be released here in the United States next month after enjoying more than a year’s success in the Japanese market. 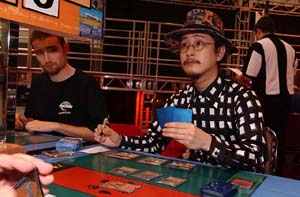 Satoshi Nakamura, Pro Tour Yokohama 2003With such tremendous popularity of CCG’s in the land of the rising sun, it is no surprise that Magic tournaments there are some of the largest ever. Japan’s first taste of premier events was Grand Prix: Tokyo in 1997. Occurring just after the very beginning of the Grand Prix program, this event gathered the astounding attendance of over 1000 players. Several players who are known as some of Japan’s most prominent made top 8 of that tournament – including “Hat-Man” Satoshi Nakamura and now retired Toshiki Tsukamoto.

The story goes that Kenichi Fujita, winner of this historic tournament, dropped and broke his trophy just minutes after the award ceremony. Heartbroken, he inquired about the possibility of getting a replacement. He was told the replacement would not be forthcoming and he’d just have to win another one. In 1998, Fujita did just that – winning Grand Prix: Taipei in Taiwan.

Since then Japan has hosted many Grand Prix tournaments and they are still renowned for their attendance. Grand Prix: Kobe – the same city that will be hosting the upcoming Pro Tour - was the world’s largest, gathering about 1200 competitors.

Worlds Pro players got their first taste of Japan in 1999, when the World Championships took place in Yokohama. Thousands of Japanese players attended as spectators over the course of the weekend. This was the only Pro Tour event where players were allowed to buy and sell cards on the floor. Many American and European competitors used this to subsidize their trip. There were few older cards in Japan at the time and they commanded extremely high prices. Dual lands were selling for over $25 – and this is back when you could still get them for about $8 in the USA. 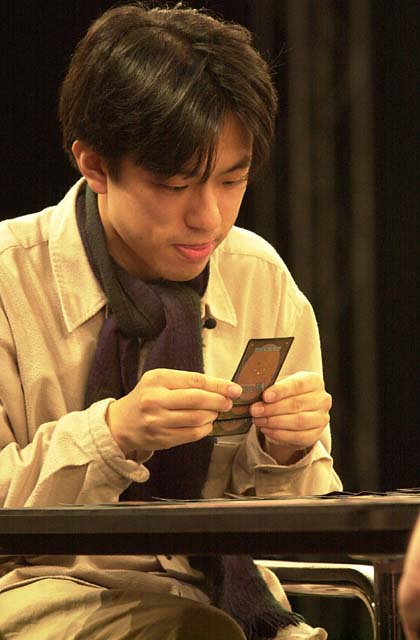 Tsuyoshi Fujita, Pro Tour Tokyo 2001On the heels of this event’s tremendous success, Japan earned an annual Pro Tour stop, starting with PT: Tokyo in 2001. Zvi Mowshowitz won that tournament, but to local players it was finalist Tsuyoshi Fujita who made all the difference – he was the first Japanese player to place this highly in a Pro Tour. The Japanese pro community has established itself as a real force on the Pro Tour over the last few years and they achieved a second place PT finish several more times – they are still chasing that tantalizing Pro Tour win however.

The Pro Tour made stops in Osaka and Yokohama over the last two years but this will be the first time it comes to Kobe. Kobe is located within a short driving distance of one of Japan’s largest cities, Osaka – and a few hours away from Tokyo. Historically the Osaka area Magic tournaments have mustered a very high attendance and PT Kobe side events are likely to be no different.

Over the last few constructed Pro Tours Japan has become a source of innovative deck tech. Kobe will also have a higher than average number of Japanese players because there are more PTQs for a Japanese Pro Tour stop held there than for other Pro Tours. Will the combination of these two factors culminate in a Japanese Pro Tour champion? That is definitely one of the top storylines of this upcoming tournament.

This weekend European players will get their first opportunity to play with Darksteel cards at the highest levels of tournament competition. The third Grand Prix to be hosted in Madrid, it’s likely to see attendance of 700 or more players. With Pro Tour: Kobe so close however, it will be interesting to see how many of Europe’s top competitors will be able to attend. Hopefully most will go since it is a Limited event and should not significantly detract from their playtesting of the Kobe event.

Artwork of what Ice Age card is a self-portrait?

Where was the first Pre-Release ever held?

(Please do not e-mail me the answers. Correct answer will be posted in next week’s column.)

Good Play of the Week

Darryl was playing an Affinity mirror match, holding on to an Assert Authority when his opponent was down to just two cards in hand. Neither player had any threats on the board. His opponent attempted to cast an Isochron Scepter. After some deliberation, Darryl chose to counter it with Assert Authority. That resolved and his opponent played out his only other card in hand – a Broodstar!

This was an excellent example of a bluff. Darryl’s opponent figured that if Darryl had a counterspell of any kind he would almost certainly use it to stop Isochron Scepter. If he did not, a Scepter would resolve with no Imprint – but it would also serve to make Broodstar larger – a Broodstar that was now safe to cast.

“At the Darksteel Pre-Release in Glasgow, Scotland. I lead with Skullclamp on the draw. My young opponent then taps two mana and lays down... Genesis Chamber! I showed him the interaction and offered to let him take it back, but no! I win with a very full hand.”

John was playing in an Extended PTQ after the recent round of bannings. He was using an Infinite Lifegain deck and his opponent was playing Psychatog. He won the first game and boarded in Damping Matrix for the second duel.

Surely enough, Matrix came out on turn 3, making his opponent’s Psychatogs and Isochron Scepters less than optimal. John was slowly building up his combo when his opponent used Cunning Wish to fetch a Boomerang. Suddenly his board position did not look as good… until his opponent cast an Isochron Scepter imprinting the Boomerang on it! To add insult to injury, his opponent was already down to two life points, so when he tried to activate a Scepter, not only did he realize he would be unable to use it because of Damping Matrix, he was also forced to take two points of mana burn which ended the match.