t's difficult for Christmas to sneak up on you. With shops full of tinsel and cheesy Christmas music, its approach is as inevitable and tantalizing as a swarm of zombies on the horizon bearing gifts. I have never quite managed to forget that my birthday is coming either, though I have been warned by those older than myself that someday I might want to.

This summer though, I will confess that the now imminent Magic 2012 Prerelease did rather catch me unawares. It was but a few short weeks ago, on Magic: The Gathering Commander release weekend, when like a bolt from the blue I learned what it must be like to suddenly realize that the season to be jolly was approaching at a rate of knots. It was Duels of the Planeswalkers that shook me from my reverie. Visiting friends for a bit of Commander action, I had a chance to play through the latest update, taking my best shot at helping out in the Archenemy part of the game. 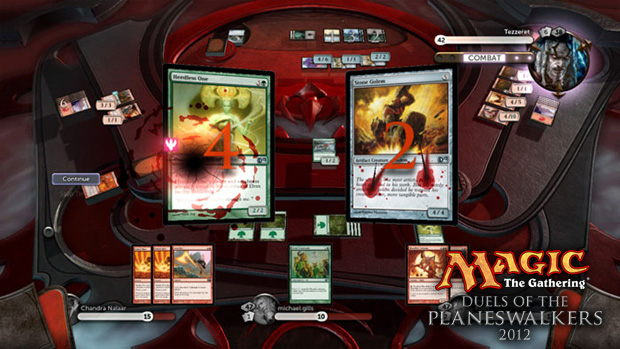 Check out Duels of the Planeswalkers 2012.

Once I got past the fact that I was dealing with buttons and startlingly high-definition card art, I found Duels of the Planeswalkers to be a thoroughly entertaining complement to all the Commander fun that was going on that weekend. It is all Magic after all. But wait... there were cards in Duels that looked... well... new?

Boom. It's new set time baby, and with the M12 Prerelease events this coming weekend, I for one am pretty excited.

I've already seen Sorin Markov getting to play with a bloodthirsty team of vampires on the Xbox, and I've marveled at the power of Gideon's crew, both Lawkeeper and Avenger. Right now, though, I have yet to hold either card in my hand, let alone any of the other new cards we have in store for us. The prospect of doing so for the first time at my local event, surrounded by friends all playing the game that brought us together is one that warms the cockles of my heart. Well, it would warm them, if I knew what they were, and they weren't already fairly warm thanks to some uncharacteristically good weather here in England. You get the idea, though. 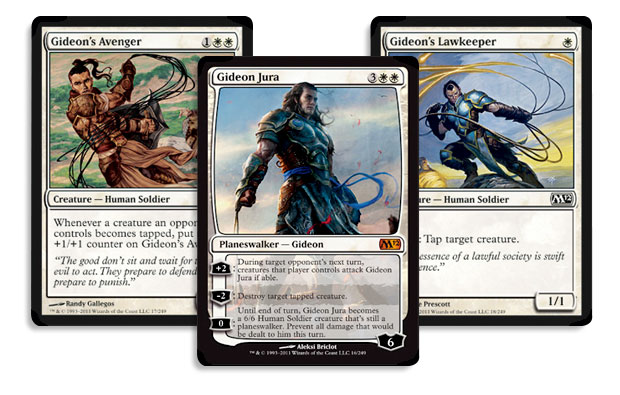 My first set was a core set (Revised Edition), and my first tournament some number of years later was a Prerelease. I learned how to play with those first few packs, but in many respects I really learned how to play once I made it to a Prerelease. These are the places where everyone comes to play and have a good time, whether they've been playing since the mid 90s or are picking up real cards for the first time, having been lured in by trying the computer game just the other week.

While strictly speaking the Prerelease is a tournament, and there are prizes up for grabs for those that do well, for me it is more about getting to see the new cards, try them out, and catch up with other players who are just as excited to be doing such things as I am. As tournaments go, the playing field is fairly even. Everyone has six packs to build a deck with, and all those packs will be from the new set. Yes, some of the cards have been in other sets in the past, but there will certainly be some surprising new cards for even the most seasoned players. The atmosphere is relaxed, and for anyone looking to learn how to get better I can think of few better places to start.

If you are thinking about going to your local Prerelease, I have a few tips for making the most of your day. First things first, find your most local event here or using the event finder to the right of this very paragraph. If you're lucky like me, the Prerelease will be within stumbling distance, but if not, you might need to make a few plans for travel to get to one. Secure your ride early, as Prereleases can be quite popular! With that in mind, it might not be a bad plan to get in touch with the tournament organizer beforehand, and find out any directions you might need and when the event starts, and perhaps even get your name down on the list to play. While there is a stereotype about the English loving queues, even we sometimes baulk at long queues for Prereleases, and if space is limited in your local store, you don't want to miss out.

Once you get to the event, you will find yourself sat down and ready to build a deck. With six boosters to work with, you'll have quite a few options. A Prerelease is a good time to experiment, but in the interest of having games where you are able to easily cast all your spells, I'd recommend keeping to probably just two colors (with maybe one or two cards of a third color). So that you draw your best spells that much more often, I'd try to stick as close as you can to the 40-card minimum deck size. Additionally, having a good mix of costs in your deck means that you have a better chance of being able to do something every turn. One-cost creatures fairly quickly lose their luster if you draw them on turn ten, but equally, that eight-cost fatty might look a little silly in your hand if you never get to cast it. 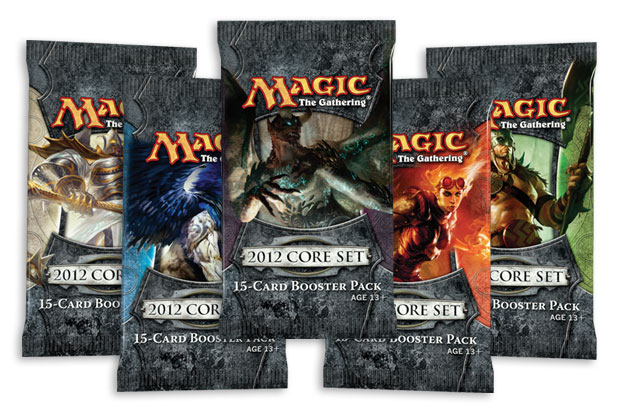 Figuring out the details of which cards to play and which to leave to one side is all part of Magic, but I'd recommend trying to build a deck that will win with creatures. That's the easiest way to win, and will likely be what your card pool will be best suited to. With a creature win in mind, you should look first for which ways you have of dealing with your opponent's creatures, whether that means spells like Incinerate, or creatures like Gideon's Lawkeeper, who can keep a troublesome creature on the other side tapped down. Also look for creatures you have that are hard to deal with. This might be because they fly or are otherwise hard to block, or simply because they are very powerful for their cost.

Creatures with repeatable abilities are particularly worth looking out for, and I'm going to show you one right now that illustrates why. Check this new card out: 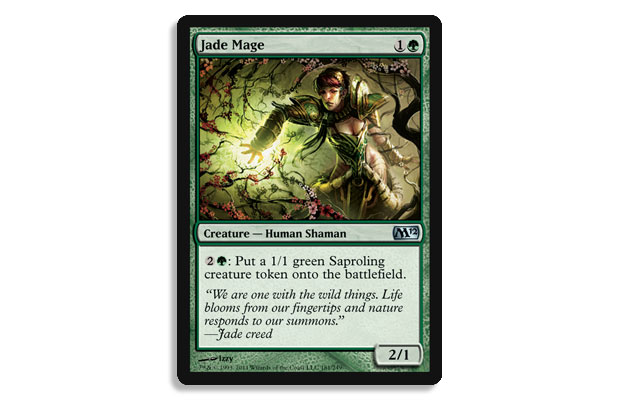 Jade Mage is one of a cycle of two-cost uncommon Mages, each of whom is a dream for just about any Sealed Deck playing the colors to cast it. (You can see the other four in the Magic 2012 Card Image Gallery.) Remember what I was saying about it being good to have something to do on every turn of the game? Jade Mage is a bit of a workaholic when it comes to giving you things you can do. On turn two, it is a fine-sized creature with which to get stuck in and start attacking if your opponent is low on defenses. On turn ten, even if your opponent has got plenty of blockers, Jade Mage still has a valuable role to play. 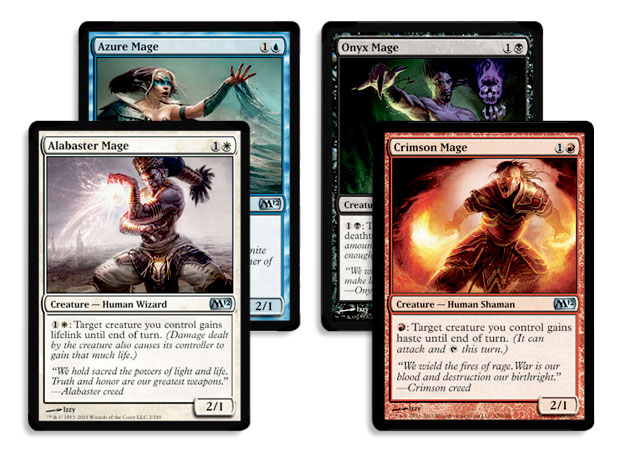 That ability to pay two colorless and one green mana to make a 1/1 green Saproling token is one that will be useful at every stage in the game. There is no tap symbol there, meaning that you can activate the ability as many times as you want, whenever you have the mana available to do so. Is it turn eight and you have lots of mana up? Why not cast Jade Mage then use the Mage to recruit a Saproling or two to your team? If you have enough mana you can do this more than once per turn. You don't have to do it just on your turn, either. You can keep lands untapped (threatening a nasty instant spell in hand), and then wait until just the right moment to let a few cats out of the bag. Or Saprolings... out of the... hat?

While M12 as a set is not quite as complicated as other sets, that doesn't mean to say that you can't be tricksy. If I had a Jade Mage in my card pool and an Overrun, I might well adjust my game plan accordingly, and work my way toward a long game where I create an army of Saprolings and trample in for one big attack. If I knew that I had lots of bloodthirsty vampires, I might use Jade Mage to create some suicidal attackers—losing a few Saprolings could easily be worth it to enable bloodthirst. 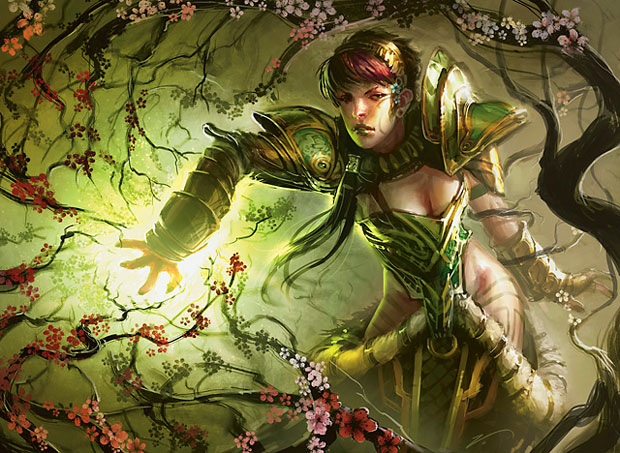 With cards like Jade Mage in your deck, you shouldn't have to worry too much about not drawing enough land (it only costs two after all), and likewise, if you draw lots of land, the Mage will let you use it. Given that Prereleases are all about being able to play good games, this is exactly the sort of card I'm hoping to open a few of when I play in London on Saturday.

I hope that you can get to one of the Prereleases near you and that you have a fantastic time, whether this is your first, or one of many. I know that I will.