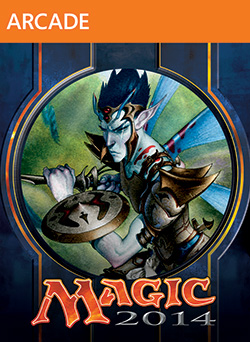 his week, the second deck pack for Magic 2014—Duels of the Planeswalkers rolls out across the various platforms and regions, there will be an update that you will need to apply or install before you can purchase these new decks.

Roll out is as follows:

So at some time on the above days the updates will begin to roll out, the exact time of these updates is up to our partners.

Seeking to expand your mastery and defeat your foes? This Magic 2014 Deck Pack includes two brand-new decks for Campaign and Multiplayer play. Stack your powers and smash your foes with the green and white "Enchanter’s Arsenal" deck. Your countless enchantments will frustrate your enemy and infuse your creatures with overwhelming might. Confuse, disrupt, and annoy your enemies with the blue “Up to Mischief” deck. Your spells and creature abilities will allow you to control the flow of the game before releasing a devastating cloud of faerie fury.