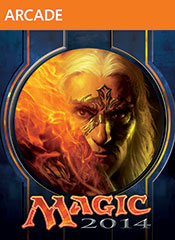 ater today we start rolling out Deck Pack 3 for Magic 2014—Duels of the Planeswalkers across all platforms and regions. As is usual this will roll out with an update to the game and once you are updated you will be able to purchase the new Deck Pack in your copy of the game.

The update will roll out at some time during the day listed below, based on your platform and region:

Seeking to expand your mastery and defeat your foes? This Magic 2014 Deck Pack includes two brand-new decks for Campaign and Multiplayer play. In the red and white “Warsmith” deck, the mere presence of your artifacts on the battlefield will bolster your unstoppable forces and empower your spells. Forge your army, and march to war! With the green “Hunting Season” deck, the creatures at your command will become unnaturally large, and if that should prove insufficient to crush your enemy, make more creatures. Call the hunt!