Magic in the Air

h, the greater Seattle metropolitan area. The go-to backdrop for a Tom Hanks romantic comedy, the home of the modern day cappuccino (not to mention Starbucks!), and the stubborn urban space literally carved out of the wilderness by a hardy group of loggers who wanted a land to call home in between cutting timber and brawling at the local saloon. And, of course, the single most important city on earth in the story of Magic: The Gathering.

How so, you ask? It's all about the many different cities that make up the area of Seattle. Like Tacoma, site of the upcoming Grand Prix–Seattle/Tacoma. Or Renton, Washington, located just south of downtown. You see, it was in Renton over a 15 years ago that a young game company owner by the name of Peter Adkison joined up with a game designer by the name of Richard Garfield. Said designer proposed an idea he had been working on that would combine elements of fantasy adventure with card gaming, and voila! Into the gaming world came Magic, forever changing how you could enjoy your tabletop.

Here's a historical breakdown of past Premier Events held in the Seattle metropolitan area:

Renton is still home to Wizards of the Coast, the company that creates Magic, but Seattle has played a bigger role in the game's history than just serving as its birthplace (as if that accolade weren't enough!). Magic Invitationals, Grand Prix, World Championships, Pro Tours; Seattle has hosted them all and lived to tell the tale. It's even played host to what was, at the time, a veritable gaming Mecca: the Wizards of the Coast Game Center. 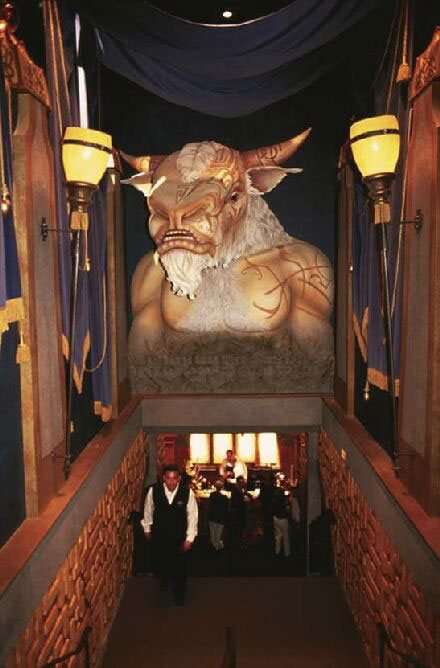 Before it closed its doors in 2001, the Game Center was one of the largest hobby gaming spaces in the world. It featured a large area for live arcade games, roleplaying space, boardgaming tables, and of course a tournament room large enough to host numerous Magic events. It even had a restaurant filled with gamers' favorite food called "Dalmuti's," which is the name of another game designed by Richard Garfield.

Two players who grew up doing their Magic playing at the Seattle Game Center are Portland, Oregon's Jed Dolbeer and Seattle's Greg "G Pelly" Peloquin. Jed has been playing Magic for 13 years, and lived in Seattle for approximately seven before moving to Portland. His name is feared on the tournament circuit in the area and he has competed previously on the Pro Tour and Grand Prix Day 2 stages. Greg has been playing the game for 14 years, and has lived in Seattle for over two decades. He is also a regular PTQ player and recently won a local Grand Prix Trial to earn himself a triple set of byes for the upcoming Grand Prix in his hometown. They took some time to reminisce about their days at the Game Center and what playing Magic in the Seattle metro area has meant to them over the years.

"There was a huge, elaborate play area with ornate red table clothes, couches, and columns. It was so over the top for a gaming room! Oh, and Dalmuti's fries!" said Peloquin.

Jed's most memorable moment at the Game Center recalled a specific tournament finish. "My first PTQ Top 8 way back during Urza Block Constructed. It was the first time I really broke through and got information from the great local players. I got a deck from Alex Mitchell and even had a feature match against Jesse Wilke, which I won. I was 15." 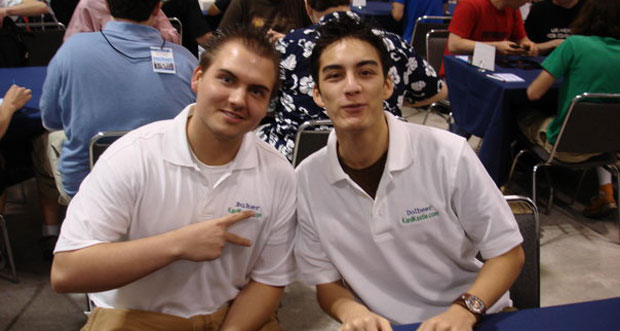 Jed Dolbeer (Right) at an event.

As it has for the game of Magic itself, living in Seattle has played a profound role in playing Magic for both Jed and Greg. "Playing in Seattle became a lot like playing with a family for a long time," Dolbeer explained."I keep alluding to the Game Center, but it was such a centerpiece of the community. You could go there every day and see the same people that you always played with. I have met so many life-long friends through my experiences in that place and in Seattle in general. The time I spent playing Magic in Seattle shaped me in so many ways."

Peloquin echoed the role of working with others in the Seattle Magic world: "It's all about the community. In the last few years we've gotten friendlier with each other, more open, and I think our results are starting to show. It's just a matter of time before some of us start Top 8ing Pro Tours (yours truly is not at that level yet, still trying to Q for the Tour .... One step at a time!)."

The effort of players like Jed and Greg to continue building a strong community of players in their corner of the Pacific Northwest can be seen today on the public message board most players in the Seattle area (and other parts of Washington, Oregon, and Vancouver) use to network with one another, northwestmagic.com.

Seattle has already seen some dominating performances by its players on the Pro Tour. In Tokyo in 2001, a group of players from the area were credited with practically breaking the Invasion Block Constructed Pro Tour format in half. Working under the title "AlphaBetaUnlimited" after a card store that sponsored them, they built a powerful red-green aggro deck that put four players into the Top 8 (including Ryan Fuller, who tested with the European portion of their playgroup). Phil Freneau, Chris Benafel, and Lucas Hager benefited greatly from their testing compatriots in Seattle with appearances in the single elimination rounds of the tournament, which Zvi Mowshowitz went on to win, and were further joined in the Top 32 by compatriots Gabe Wilson and Justin Rider, also of the Seattle area.

At the time, Ryan Fuller's performance with the deck was the single best Swiss rounds performance in the Pro Tour's history. He notched a spotless 14-0 record before being felled in the Top 8 by testing partner Chris Benafel. Here's the deck Ryan played:

That's a lot of text about the storied history of Premier Eventing in the Seattle area, but why should you come to the Grand Prix this time out? Because when Magic brings the top level of play to the backyard of its birthplace, it knows how to throw a party! Tim Shields of Cascade Games is presenting an almost unprecedented lineup of things to do for the Grand Prix.

Of course, with a Grand Prix happening in town, the folks at Wizards R&D can't help but show up to the event to participate in the Champion's Challenge! All weekend long you'll be able to meet the people who design the game we all know and love, and to even play with and against them. It's a great opportunity to ask questions you've always wanted to ask, to interact with the people who make Magic great, and to find out what it's like making games for a living. And if that weren't enough, they've also managed to nab none other than the creator of the game himself, Richard Garfield, to make a special appearance for the weekend! 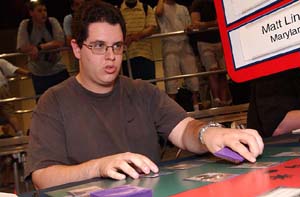 Will you dare to challenge Hall of Famer Mike Turian?

Some of the Wizards R&D members who will be in attendance include Mike Turian, Mark Globus, and Ken Nagle. Turian is a member of the Magic Pro Tour Hall of Fame, and a former Pro Tour champion. He was the lead developer on the set Conflux, as well as having been a playtester on every set since Ravnica. As a finalist in the Great Designer Search, Ken Nagle has demonstrated a canny insight into games even before he was hired by Wizards to help make Magic. Since that time he's been involved with sets like Morningtide, Shadowmoor, Shards of Alara, and Conflux, to name just a few. His favorite card that he's designed is Wild Nacatl (which you can ask him about at the Grand Prix!), and he is the lead designer of the small set to be released in February 2010, codenamed "Long." Mark Globus, a senior R&D producer, has helped with numerous Magic sets including Conflux and the upcoming Magic 2010 release. The first card he ever designed that made it to production was Scarblade Elite.

You can try your hand at beating Mark, Mike, and Ken all weekend long, as well as the rest of the R&D members from Wizards who will be there to take in all the festivities. However, for those looking for the opportunity to play with an R&D member, Grand Prix–Seattle will be bringing that chance to you! One of many great public events to be held on the weekend, the Two-Headed Giant Sealed event scheduled for 2 p.m. on Sunday will pair players from the general public up with Wizards employees to battle for glory and prizes. Of course, the chance to have some awesome stories about getting to play alongside an actual Wizards employee help sweeten the pot a bit.

Like many such events to come before it, Grand Prix–Seattle will feature artists signing cards, memorabilia, and showing off their work. Unlike other events, however, the Grand Prix will feature not one, not two, not even three, four, five, six, or seven artists, but eight confirmed creators of Magic art who will be working the event for the fans! Mark Tedin, rk post, Pete Venters, Mike Dringenberg, Franz Vohwinkel, Chuck Lukacs, and Corey D. Macourek will all be in the house on the weekend. The best part about having so many artists available? Getting all your questions about what it's like drawing for Magic: The Gathering answered, and getting your favorite cards signed, free of charge! Fulminator Mage, Chaos Orb, Time Sieve; the creators of all those cards (and many, many more) will be appearing live at the Grand Prix. 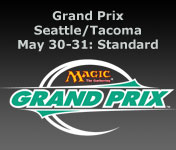 You know it's an exciting event when even the local players are anticipating it with bated breath. Neither Greg nor Jed could wait to bash their Standard decks against the best players in town for the event. Said Peloquin "I'm stoked. I love having a hometown Grand Prix. And I even live in Tacoma and work six blocks from the convention center. I couldn't ask for more!"

The Seattle area has a unique place in the history of Magic, and the latest chapter in its role is yet to be told! Make sure to stop by the Grand Prix if you live in the area May 30-31, or for more information visit the Grand Prix-Seattle information page.