A Magic History of Time

agic: The Gathering hasn't yet spawned an animated television series, a line of action figures (although these are in the works for 1999), or a big-screen live-action film starring Harrison Ford as Urza, but in its five years Magic has produced quite a few choice collectibles. Some of these items are rarer than others (like the famed Proposal card that Richard Garfield gave to his bride-to-be Lily back when Magic was still a novelty). Others still sit on a store shelf near you. And some you'll only read about on these pages.

In the beginning, there were the cards: Alpha, Beta, Unlimited, the rarely seen—and promptly canceled— "Edgar" print run (the one with a blue Hurricane), the square-cornered factory set, and the ensuing expansions. After this initial success, product offshoots flew in at interrupt speed. Hobby stores filled to the brim with art prints; Magic logo and Hurloon Minotaur pins; the first novel Arena, by William Forstchen; and the T-shirts (there were only three originally—Armageddon Clock, Vesuvan Doppelganger, and Nightmare—although more appeared in 1995). 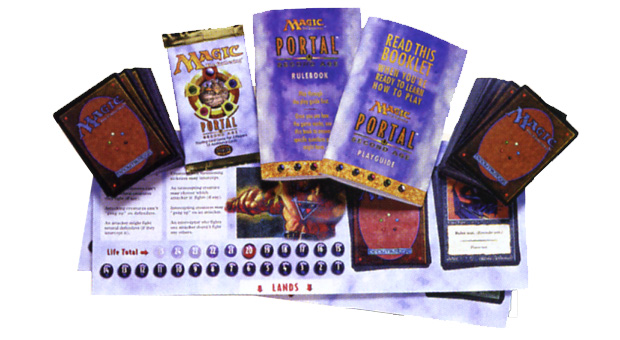 Players new to Magic found that Portal and Portal: Second Age (shown here) were the perfect gateway to the more complex world of Magic: The Gathering.

The first calendar came out in the fall of 1994 while the first original Magic poster—by Anson Maddocks and Mark Tedin—was released not long thereafter. For a short time, there were lead miniatures of some of the well-known Magic icons (Prodigal Sorcerer, Serra Angel, Hurloon Minotaur, etc.), but they weren't terribly popular and eventually disappeared. Around this time, a Little publication called The Duelist started off with a bumpy production schedule, but the "Official Deckinaster Magazine" (as it was then identified) found a groove by issue #4.

Hot: The Magic "company jackets." Tailored in both blue denim and "college letterman" style (leather sleeves and all), these jackets were embroidered with "Wizards of the Coast" on the left breast and the Hurloon Minotaur on the back. A rare few were given away as prizes in contests, but otherwise these jackets were made to order—so few made it into public circulation.

Not So Hot: The first series of Magic comic books. Acclaim Comics came out with their Shado'w Mage and Ice Age on the World of Magic The Gathering series in 1995, but this series was short-lived. Acclaim continued to produce Magic comics for a while longer before stopping the Magic presses.

Coulda Been a hot Contender: The MicroProse Magic: The Gathering Game for the PC. Word of this game hit the street as early as fall 1994 (right down to fl.ill-page industry ads), and The Duelist was alive with discussion and rumors surrounding the game. But behind the scenes, development was at a crawl. Magic on your computer was still a little ways off.

Book Two: The More, the Merrier

Magic singlehandedly launched an industry, and the chance to cash in on this amazing success was just too sweet for many to resist. A multitude of products hit the shelves that were related to the game but didn't directly bear the brand name.

Life counters quickly became all the rage, while storage boxes for decks and cards were adapted from their sports-card origins for the new game. Numerous database programs—for documenting and keeping inventories of your cards and decks—hit the market all at the same time. (Deck Daemon, from Bard's Quest Software, was among the very first.) Khalsa Brain Games introduced their line of SpellGround gaming cloths. Magic artists began to do original artwork forT-shirts produced by Mishra's Game Factory in Canada.

Hot: MicroProse released a Magic: The Gathering Desktop Themes screcnsaver that immediately became a solid seller— and a sensitive topic between artists and Wizards as a battle brewed over who owned the rights to all that Magic art. 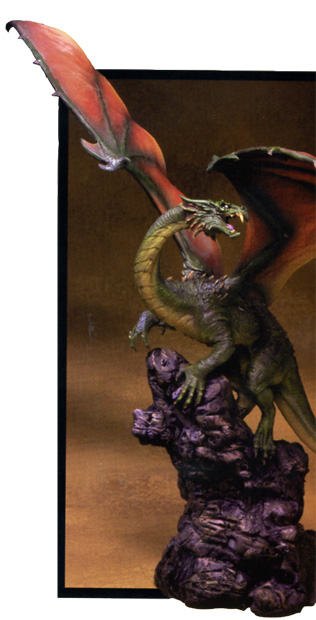 The Shivan Dragon is the second 'next-generation' painted collectible figurine, standing an impressive 22 inches tall. The first in this new series was Serra Angel. Hurloon Minotaur and Spirit Link are planned for 1999.

Also hot was the Homelands prestige-format comic from Acclaim. Featuring art by Magic artist Rebecca Guay, the shrink-wrapped comic came with one of three Homelands cards (Baron Sengir, Apocalypse Chime, or Feroz's Ban). Readers had a first glimpse of this comic at the Homelands event in downtown New York City.

Not So Hot: Magic novels, which originally did very well (partially due to offers within the books for otherwise unavailable Magic cards) did not sell as well without these free cards. Unfortunately, readers overlooked some fine titles like The Prodigal Sorcerer by M. C. Sumner and Ashes of the Sun by Hanovi Braddock.

Still Hopin'to Be Hot: The still-delayed MicroProse game. Advertisements informed garners that this would be released in a Windows 95 version, not an MS-DOS version. But still no game. Sigh.

What do players want, besides more cards? Some items seemed to go over fairly well (the Workman page-a-day and wall calendars, for example); others, not so fine. (Did anyone use Quick Start to teach a friend?) Collector's albums for specific expansions (beginning with Mirage) seemed like the perfect tie-ins to card collections.

Everyone and his dog released a strategy guide, some tailored to specific player-types (Wordware Publishing did quite a few of these), others to specific expansions—like a guide to Alliances or an in-depth look at Visions cards. Pro Tour decks gained popularity because they allowed players to experience the power of solid Magic masters like Lestrée, Loconto, Justice, or Baxter. Deck Protectors (from Ultra•PRO) came back in a big way, as did Magic T-shirts (now with cardfaccs, mana symbols, and even event logos on the front). Finall Wizards created the rarest card since Proposal: the World Champion card. There can be only one ... and there still is.

Hot: Bring on the alternate-art cards! The Arena league did it (Disenchant, Fireball, and one card each for the basic lands) and the DCI did it (Counterspell and Incinerate). Oversized cards also suddenly appeared everywhere.

Not So Hot: Books and comics were still on hiatus, while cool items like the paintable plaster Magic figurines (Baron Sengir, Serra Angel, Prodigal Sorcerer, Hurloon Minotaur) were hard to get due to limited availability (they actually sold out very quickly).

The MicroProse Magic game finally hit the shelves. Players traipsed around Shandalar and built powerful decks through winning ante, trading, and going on quests. Shortly after the initial release, Duels of the Planeswalker added 84 cards and enabled Internet multiplayer games.

And Now for Something Not Too Different

If it ain't broke, don't fix it. Much. Quick Start didn't work, but the Portal starter game sure did. And the fix was so good that Portal — Second Age matched the success of the original.

The long-planned Vanguard cards debuted—after all, if players loved oversized cards, why not give them ones they can use? Tempest preconstructed decks also took off with amazing success, as did the official guides to the various expansions.

Amidst all of this, Richard and Lily Garfield announced the birth of their daughter Terry Linnea—an announcement printed, naturally, on a Magic card called Splendid Genesis (don't bother checking your local retail store for this one).

Today, numerous products sit in a holding pattern to see how they'll be received—a new line of Magic novels; a cofke-table art book (The Art of Magic: The Rath Cycle); and variant products (check your local stores for Earthquake and instinct, two new games carrying Magic imagery, and the Magic Poker Decks).

Oh, and that PC game? Two expansions later, this title has definitely reached the "Hot" category. Here's hoping for the big-screen live-action film based on the game.. .starring Harrison Ford, of course.