ime for the answers to Monday's puzzles.

You have several ways of winning this game, but they are all in your deck. You can draw a single card with Terrarion, since Pithing Needle will not stop mana abilities. Your outs include:

You can manipulate your library to change the odds of drawing certain cards. Your options include:

Playing Glimpse without later randomizing your deck does not affect your odds. So which option is best?

Your best option is therefore just to sacrifice the Terrarion right away. (I'd like to thank goblinrecruiter for pointing out a couple options I missed.)

Unfortunately, the odds were against you and you failed to draw either Hex or the Golgari Guildmage, and you lost the final game. That just reinforced the fact that Magic is both a game of skill and chance.

Below is an image of something I've been constructing for quite some time now. I add one new card to the matrix each day. Can anyone figure out what it is? Feel free to post guesses in the forums. 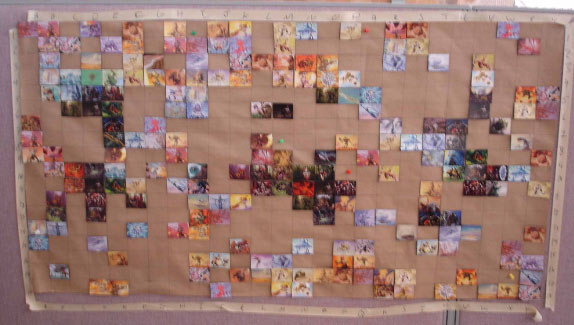