ur friends at Penny Arcade have a new Internet reality show called Strip Search where they brought awesome webcomic artists to Seattle to compete for an amazing prize: "$15,000 in cash and a year integrated into the Penny Arcade machine."

So when they approached us about being involved in this project, of course we said yes! We love working with them, from creating the PAX coloring book, to the Pinny Arcade that debuted at PAX East this year. This time we had an opportunity to be part of their web series. Awesome! So Elaine Chase (Magic's Brand Director) and Mike Gills (Magic's Marketing Promotions Manager) went down to pose a challenge to the contestants. If you haven't been watching Strip Search, you should definitely check it out from the start. If you want to see what Magic did on the show, check this out!

Note: The video does contain adult language, possibly not suitable for small ears.

As if showing you the episode wasn't cool enough, here's a little behind-the-scenes info about the Strip Search experience from Robert Khoo, Penny Arcade's CEO:

Trick: Strip Search was born out of your Kickstarter project, but where did the root of the idea take place?

Robert: Gabe and Tycho are reality show superfans, and a few years ago they blurted out "America's Next Top Webcomic" during one of the podcasts as a joke. I wish I could say it had more elegant beginnings, but they proceeded to bother me about it every few months for the next 4 years. The Kickstarter stretchgoal just gave us a good excuse to see if people actually wanted such a thing, but even then I'm not sure if people quite understood what we were talking about.

Trick: Not a lot of people ever get to run a reality show, what was that like?

Robert: It was one of the most surreal experiences we've ever had. It's part project management, part show runner, and part mad scientist. You don't really see us on camera, but we're in the house observing and taking notes on everything the Artists do while putting them through these challenges/experiments. It is absolutely as odd as it sounds.

Trick: What drew you guys to working with Wizards for a part of Strip Search?

Robert: We knew that the challenge at hand needed really powerful, iconic characters, and because of that, Wizards were actually the first people we reached out to. They've been known to take a lot of creative risks with us in the past, and this was no exception. I'm not saying this because you're the one asking me these questions, but they were super great to work with, as always.

Trick: Who would you say is the biggest Magic player at Penny Arcade?

Robert: It's definitely the head of our IT (technically it is the Department of Beep Boops), Kenneth Kuan. He was fairly obsessive about it a few years back. But a HUGE fan is actually the host/director, Graham Stark [Editor: Graham can also be seen in our video series Friday Nights]—he has what we would call a dependency issue.

Trick: Which is a more fun Kickstarter stretch goal: Run Strip Search or organize the video of Gabe chasing ducks?

Robert: Ha! I stepped in far less duck poop during the filming of Strip Search, so let's go with that.

Thanks to Robert and all of Penny Arcade for having us be part of the show! Take a closer look at what each artist created for the Magic design challenge below. 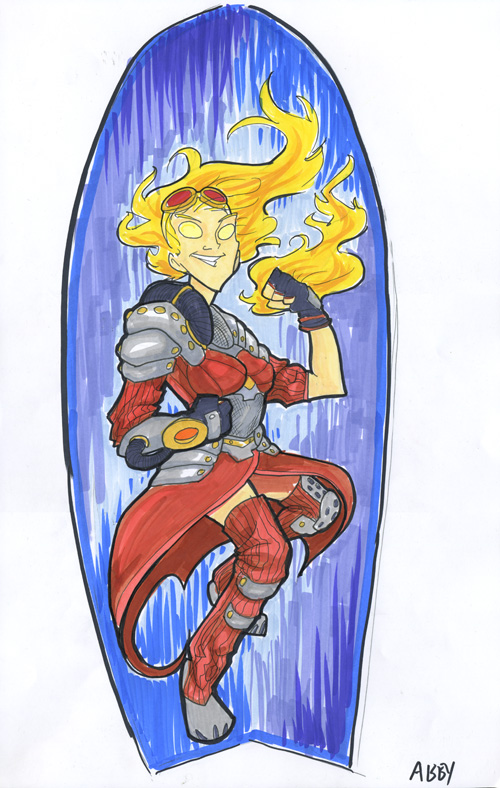 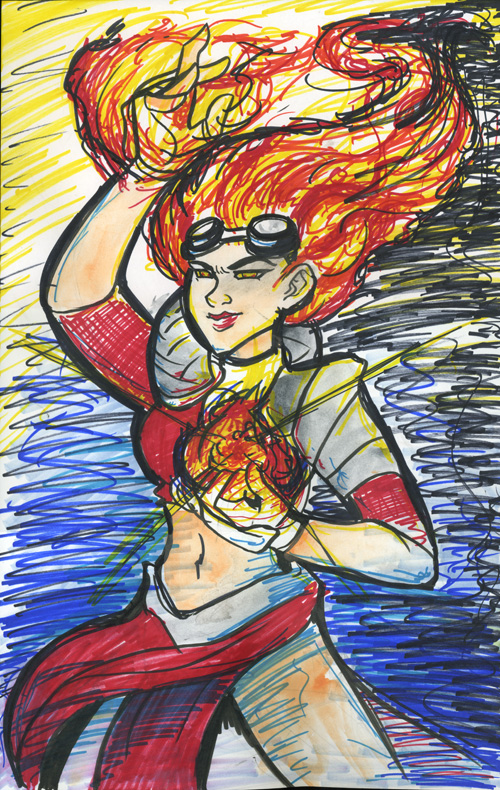 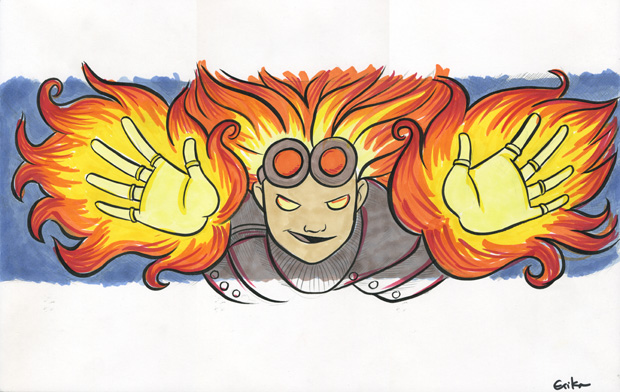 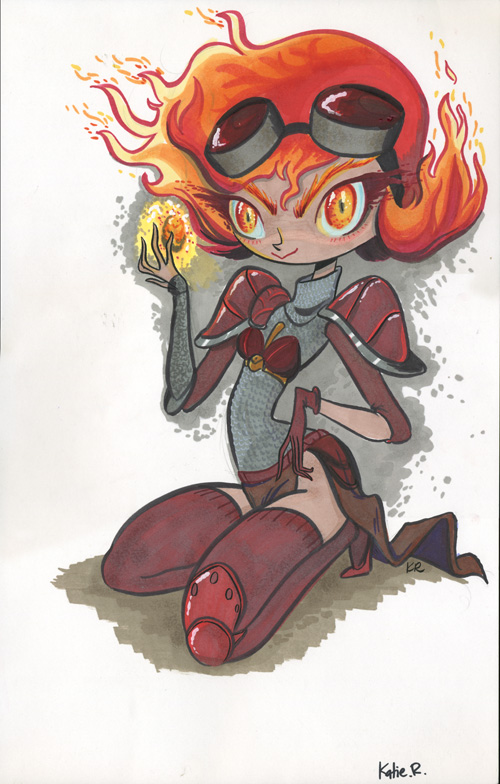 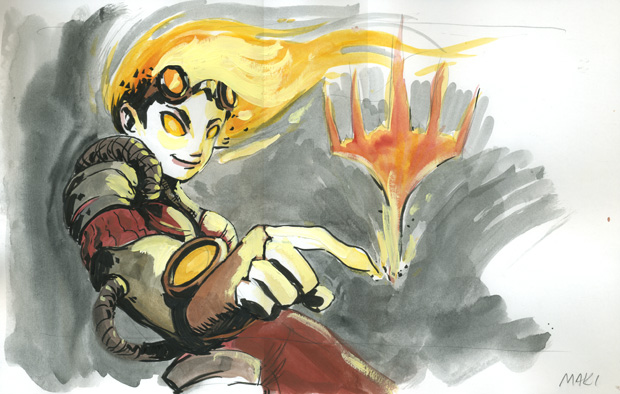 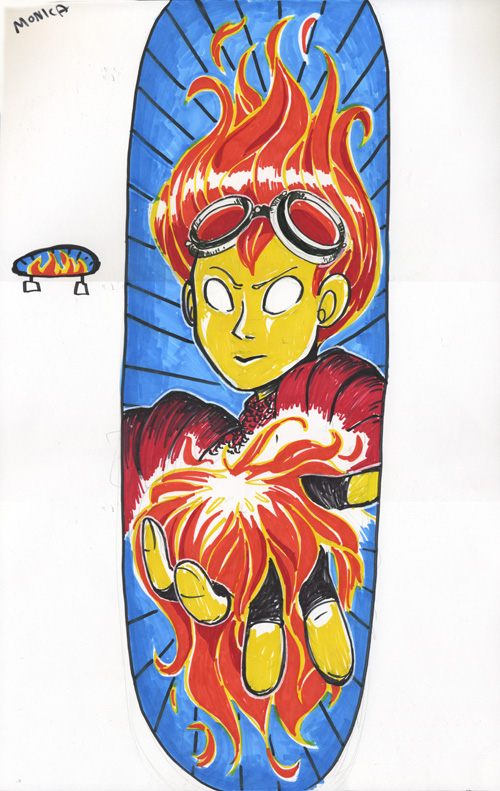 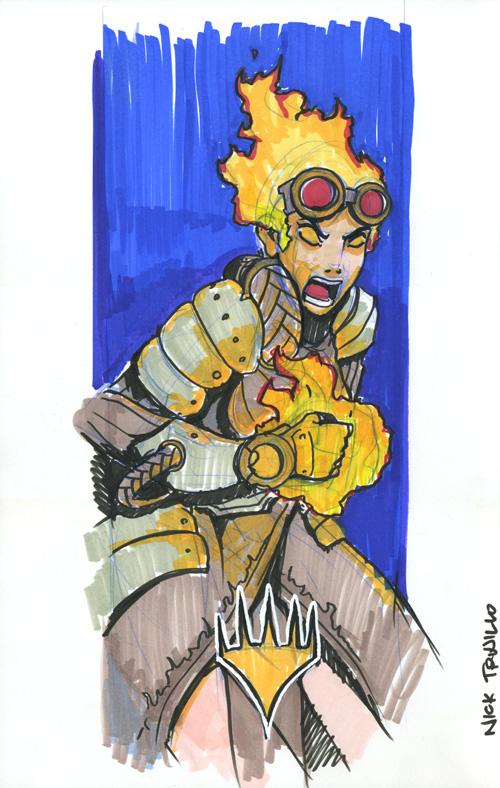 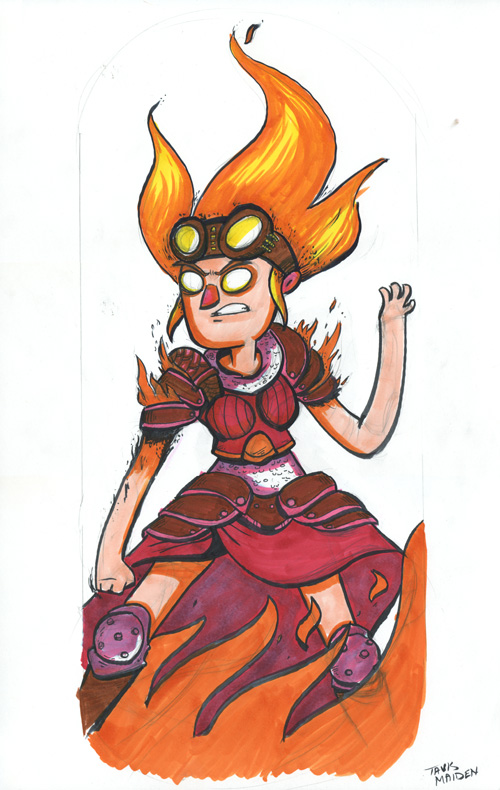 Ultimately the decision from Mike and Elaine came down to the works by Maki and Erika. They loved Maki's painting but he failed to follow the color pallete for the campaign and that pushed Erika into the lead. We plan on having Erika's winning art show up on something exciting this summer!

Good luck to all the artists in Strip Search and thanks to them for these awesome works of art!

Do you agree with Elaine's and Mike's winner? Who do you think should have won? Email me or tweet me!