When you open a pack of Magic cards, we’re hoping you not only see a cool game with all sorts of fun mechanics, but also an amazing world full of intriguing characters, places, and items. 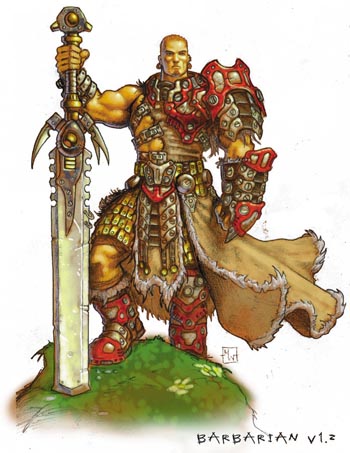 Everything about the cards you play with starts with ideas. R&D spends their time inventing and perfecting new and exciting mechanics, while the writing team works on creating fascinating storylines for us to experience the world of Magic through. Then we here in the art department are responsible for giving life to the stories and mechanics through illustrations.

That's where the Magic: The Gathering Style Guide comes in. If you’ve been following this site, you may remember seeing “Style Guide sketches” of things like Dementia Summoners or Dwarves. But what exactly is the Style Guide? The Style Guide is a collection of drawings and descriptions created specifically to detail how major races, characters, and environments that a set or block will feature look. Our artists create concept sketches for the all the lands of the set, the artifacts, the characters, their weapons and clothing, the buildings, some visual representation of the set mechanics, and anything else that is needed to make sure the final illustrations are an accurate representation of the storyline that had been decided on by the Magic Brand team.

Visually, playing Magic: The Gathering is like playing no other game. The card art is a joy to behold – it sets the tone for the game as well as a milieu for the story. Because the art is so important to the game, we need to establish a high level of “continuity.”

Let’s look at Odyssey, for example. The premise of the Odyssey story can be distilled down to this: The morality of a man is not fully known until he is given ultimate power. Once we had that point, we needed a protagonist, a villain, and a “mirror of desires” that would test all men who possess it.

So we had meetings with our concept illustrators and put them to work developing all those key components. The villain came to be known as the Cabal Patriarch, and the mirror became what we now know as Mirari. The protagonist became Kamahl, Pit Fighter. Our team had to concept Kamahl's build, the size of his sword, his armor, and his attitude.

Once the Magic team was happy with all the final concept illustrations, our commissioning art director compiled them into the Style Guide, which he then provided to our freelance illustrators to use as reference as they painted the cards. That process allows us to assign many different illustrators around the world cards with Kamahl in them and he’ll always look like he is supposed to.

Above, you can see the Style Guide illustration for Kamahl. You may notice that Kev Walker (the card artist) took the liberty of making him completely bald – and we actually liked that better!

Here are a few more sketches from the Odyssey Style Guide, plus some of the cards that used the sketched for reference:

Centaurs. This sketch shows one of the types of centaur that lives on Otaria. This "species" is the most nible and graceful of the bunch. It shows up as Leaf Dancer in Odyssey, and also in Torment's Chainer's Edict.

Dwarven Weapons. This drawing is sort of a schemnatic for the weapons that the dwarves use. Both Balthor the Stout and the Dwarven Recruiter use the main axe-hammer hybrid, and the other weapons can be seen in the hands of the Recruiter's followers.

Nomad Tents. This is but one of several different nomad dwellings; others can be seen around the Nomad Stadium. Cleansing Meditation shows the interior.