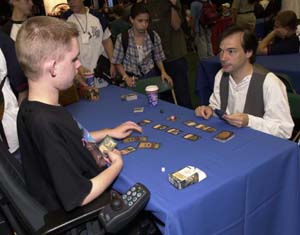 Not everyone has an opportunity to have one of their wishes granted. But for one boy from Holland, attending the U.S. National Championships certainly was a dream come true.

Seventeen-year-old Sid van Loon suffers from Duchennes Muscular Distrophy, the most common and most destructive form of the disease. Sid has been playing Magic: the Gathering for almost seven years and the Central Florida Make-a-Wish Foundation granted his wish to attend the 2000 U.S. National Championships. In addition to simply attending the event, he received a box of Prophecy, more booster packs, and a U.S. Nationals Jersey signed by fantasy artists Rebecca Guay, Mark Zug, D. Alexander Gregory, and Tony DiTerlizzi, as well as Magic designer Richard Garfield. Sid played Garfield many times throughout the weekend and was able to have every one of his cards signed by the veteran game designer.

"When I played him, I played my all-color deck based on Brian Selden's World Championship deck from a few years back. I was very impressed when I met him, he was a nice guy. I don't get the chance for much competition in Holland, so it was very good."

Competition was the reason that he wanted to attend U.S. Nationals this year, instead of another major tournament in Europe, like the European Championships. It was his extreme interest in the U.S. Nationals that encouraged Make-A-Wish to bring him to the States.

His mother agreed that it was good for Sid.

"He's been excited every day, and excited about meeting the top players. I think it's been quite an event for him. I'm so happy his wish came true, and all of the other special things for him too. My son has been very busy with thinking about competition. He wants to come back to play at the World Championships, and I know he can make his own wish come true if he wants it. He's gained a lot of confidence here for competition."

Sid isn't sure who he would pick to be U.S. National Champion. "It's hard to say. I'm not sure."

What he is sure about, though, is that he's gotten a lot out of this weekend.

"This has been a wish come true. I've wanted to do this for more than two years."