he cards Master of Waves; Thassa, God of the Sea; and Bident of Thassa all look very appealing to me, both by themselves and in concert. After reading Caleb Durward's article on Thassa, I was inspired to brew up a similar list. I liked a lot of what Caleb had going on, and decided that taking advantage of Master of Waves (which may not have been previewed by the time Caleb wrote his article) was a good direction to go. 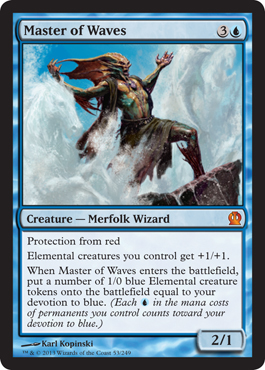 The deck does indeed revolve around the three listed cards, all of which combine well. Bident of Thassa pays you handsomely for hitting with multiple creatures and increases your devotion to blue at the same time. Master of Waves takes that devotion to blue and turns it into a tidal wave of Elementals, all of which conveniently draw you a card off of Bident of Thassa once they get through. Thassa herself also benefits, letting you scry each turn and get through defenders, as well as eventually turning into a giant monster to attack with.

I liked the curve Caleb laid out, and was especially happy with how well Frostburn Weird and Nightveil Specter interacted with Master of Waves and Thassa. Cloudfin Raptor and Judge's Familiar are the necessary one-drops, which serve to power up the big three by being evasive attackers and a cheap source of blue symbols. I added the one Ætherling as a finisher of last resort, and figure with all the scrying and card draw you might end up in spots where you just need a powerful threat to win the game.

Galerider Sliver is a card I considered adding but decided to keep the curve a little higher. I like that this deck has a strong midgame, and once you go to twelve one-drops you end up attacking in a slightly different direction. All of the different sources of card and board advantage add up, and once this deck gets ahead, it just rides the wave to victory.

4 Master of Waves 2 Bident of Thassa 1 Jace, Architect of Thought

4 Master of Waves 3 Thassa, God of the Sea 1 Jace, Architect of Thought
60 Cards