have been waiting for the release of Magic 2012 for a year now, and it is now just about upon us! I can't wait to show you what a great set this will be. But first, let me introduce me and my team.

Hello, again! Just a couple of weeks ago you read my bio as part of my development article on Magic: The Gathering Commander. I'll admit—not much has changed since then! You want something else? Well, in addition to the teams mentioned in that article, I also helped design the Duels 2012 puzzles.

Doug was on the Magic 2011 design team with Aaron and me, and the additional continuity on this team was fantastic. His day job is as a writer on the creative team and Savor the Flavor author made him a great asset to the team, helping remind us of flavorful, top-down fantasy tropes. Doug showed a great sense for seeing how the structure of the set was coming together and offering pertinent suggestions on things to add or subtract. In fact, it was Doug who came up with the idea of the new uncommon Mage cycle for this set that you may have already seen in the Card Image Gallery.

I was very glad to have Aaron on my design team as he was the one who came up with the new philosophy behind core sets and led both of the Magic 2010 and Magic 2011 design teams. As Magic R&D director, he doesn't have much time to sit on teams, but he wanted to make sure that I understood his vision while infusing it with my own perspective. Aaron's help was invaluable and was easily able to keep me from heading down too many dead ends. Magic 2012 is a much better set than it would have been without his guidance. Thank you, Aaron.

Ken, one of my comrades from the original Great Designer Search, is one of Magic's most prolific designers. In addition to leading the designs of Worldwake, New Phyrexia, and Magic: The Gathering Commander, he has been on most of the Magic design teams that have run in during his four years here. For Magic 2012, I most appreciated his ability to create fun Timmy designs.

One of the biggest things that Aaron Forsythe did with Magic 2010 and Magic 2011 was to infuse them with a bunch of awesome, top-down cards like Baneslayer Angel, Vampire Nocturnus, Shivan Dragon, and Djinn of Wishes. While we ensured that Magic 2012 had some old favorites, it was important to me that we had new ones as well. In particular I felt that green needed some love, and what better place to start than with a Hydra? To get process rolling, I recalled Magic's first Hydra, the Rock Hydra: 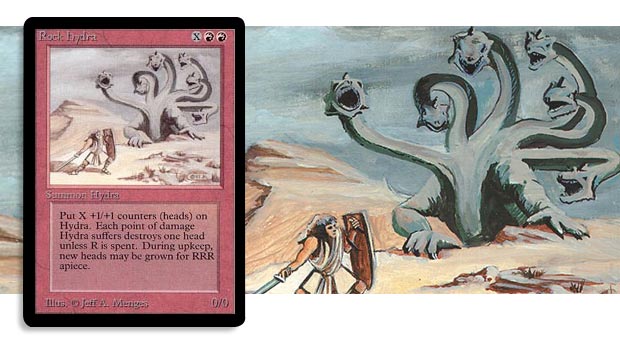 I really liked how the counters captured the idea of heads, but regrowth of heads felt clunky to me. The Rock Hydra hit a little too close to a simulated hydra rather than being visceral fantasy. One of the things we talk about in R&D is making sure that top-down cards only have as much simulation as needed, but focus more on resonance and visceral feel of a card. Rock Hydra did capture the cool head regrowth part of a Hydra. Was there a better, more visceral way to do it? The Feral Hydra was closer: it still had the counters as heads that I liked and the head growth was much simpler. However, paying mana for additional heads after being summoned didn't feel right. Heads should grow on their own, not because I am supplying spell energy to the hydra. So I kept looking. Magic 2010 introduced something closer to what I wanted: 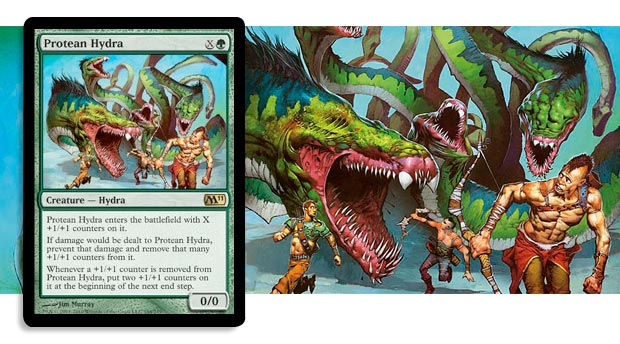 Ah—now we are getting close! However, it still is a bit heavier on the simulation side than I was looking for. While it simulates the idea that cutting off a head yields two new ones quite nicely, it is still a simulation, and I felt it was getting in the way of the excitement of a hydra growing out of control. Also, in all of the games I played with the Protean Hydra, my opponents never let it grow any heads. I wanted something that would let you see the heads multiplying and growing out of control. While designing cards, it is important for cards to both play well and read well. The Protean Hydra read well, but the play never met the level of excitement it promised. With this in mind, I presented to my team the following:

Infinite Hydra
XG
Creature - Hydra
CARDNAME enters the battlefield with X counters on it. At the beginning of your upkeep, double the number of counters on CARDNAME.
0/0

This certainly got a reaction from the team! Here was a Hydra that really would grow. It was simple and yet the resonance was there. However, we were worried it was too strong. A creature that could grow arbitrarily large starting with just two mana seemed to be too much. After some discussion, we tried this:

Infinite Hydra
XGG
Creature - Hydra
Trample
CARDNAME enters the battlefield with X counters on it. At the beginning of your upkeep, double the number of counters on CARDNAME.
0/0

We didn't know if either one would get through development, but I felt we had a better chance with two swings than with one! So, when I handed the Magic 2012 design file over to Tom LaPille (the lead developer for Magic 2012) I showed him both designs. After some play in development, they made some minor adjustments for power.

Now that is a Hydra!