are plenty of Magic stories that we can all share. One of my favorite Magic stories is a Type 1 story from a few years back. Bob Maher, Jr. was at a Magic event talking with a bunch of old-school Type 1 players like Rudy Edwards, Brian Weissman, and other luminaries. For over an hour they had been talking about just one thing: Type 1. They went over everything they could think of, arguing back and forth the pros and cons of everyone's ideas about the format. They were just wrapping up their talk, and were really excited about the things that everyone had contributed when, as luck would have it, Mark Rosewater strolled on by. Maher called out to Mark to join them.

“Mark! The guys and I have just been talking about Type 1, and what could be done to make the format really competitive and popular. We've got some really great ideas that we've hashed over, and we'd really like you to hear them!”

“You know what I like about Type 1?” Mark asked.

“You can play all the rats.”

As Maher tells the story, everyone standing around kind of slumped their shoulders and slinked off into the shadows, and they never did share their thoughts with Mark. While today we're experiencing a veritable renaissance in Type 1 play, I'm still curious about the ideas they had.

I imagine that as R&D made today's Fifth Dawn preview card, Mark must have been struck by mixed feelings. Finally, he would have a Rat that would bring back the glory days of the Plague Rats, but at the same time, he might not feel like playing any other rat than this one. I have to imagine that if Mark didn't design this card, it was designed with him in mind: 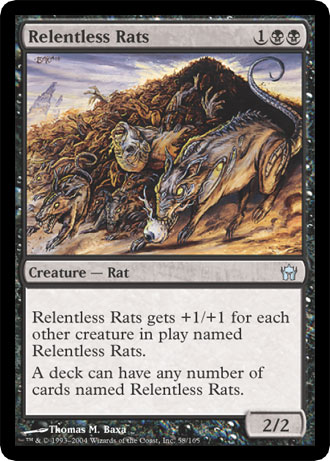 I say again, wow. Somehow this week, I can't help but think of the movie Willard. Crispin Glover orders his rats about. “Eat!” he says, and they eat.

When Scott Johns sent me this card a few weeks ago and told me to keep quiet about it, I have to admit it was incredibly hard. I gave little hints to friends about how amazingly cool that I thought the card was and I'm sure that they weren't expecting it to be anything remotely like this. This card breaks the rules, and it does it with mad retro style!

I remember millions of years ago back in the dark ages of Magic playing against decks that went something like this:

When Wizards instituted a 4-card limit, Plague Rats were one of the big reasons that people complained. Even after the change was made, the Plague Rat deck lived on. Even today people still use the “Goldfish Test” for their decks. The Goldfish Test is simple: imagine that your opponent in a game is a little goldfish sitting in a bowl, never taking a turn. You are the only one that gets to play. See how long it takes you to kill the Goldfish. The “Rat” test works similarly. Again, you go first. This time, your opponent casts Plague Rats every turn and then attacks. Usually, this is a much harder test to pass.

Relentless Rats are not only stripped of that annoying four-card restriction that has hindered the poor Plague Rats for so long, but they're also just a little bit bigger to boot! About the only thing I don't like about the Relentless Rats is that they aren't Rare. The cruel streak in me relishes the idea of someone going through pack after pack in their quest for their thirtieth rat.

Of course, being able to play as many rats as you want does mean you have to figure out how many is too many. Somehow, I think 40 Rats and 20 lands is not quite the optimum choice. There isn't a specific right answer for every deck, of course. All of the Rat decks are going to have the same problems to fight. Relentless Rats costs 3 mana. That means, in general, that you'll be casting at most 1 rat a turn for quite a while.

One way to avoid this problem is to get a “discount” on your Rats. You only need one Jet Medallion to make all of your Rats cost only

, and you also get the added benefit of making any other Black spells you might choose to run go down in price too. Sneak Attack also gives you a quick discount on your Rats, but at the hefty price of losing that rat forever at the end of the turn. Peat Bog is a very reasonable way to get an early start on dropping Rats (you can start dropping them right from Turn 2 onwards with the right draw). Dipping into Green for Birds of Paradise or Elves of Deep Shadow (my favorite art in the game) will accomplish the same trick, though be a little more fragile.

Certainly having a bunch of Rats around is going to make things like using a Cursed Scroll pretty easy. There just aren't going to be that many options that you can miss with! This same trick works with several other cards as well. Vexing Arcanix is going to be very consistent in hitting the right card if you target yourself with it and name Relentless Rats. If you want to stretch your colors a bit (say with dual lands from Revised), using a Wood Sage will be a bit better than having your own personal Howling Mine. You can pull off the exact same trick for about a million mana more with Assembly Hall, as long as you have a single Rats hiding in your hand somewhere.

A much more dramatic way to accomplish the same trick is to go into Green for Pack Hunt. At

, Pack Hunt is a pretty cheap spell that will quickly nab you an Ancestral Recall's bounty in card advantage. For a more permanent means of getting a bunch of Rats, you can cheat a little with Dual Nature. At

, it has a pretty hefty price, but it does do some pretty amazing stuff for your Rats. Check out the following:

Getting Rats into your graveyard can have its advantages as well. Running a card like Book Burning, or better yet Cephalid Vandal is going to put a ton of Rats into the graveyard. It's a simple matter to use Living Death to get them all out and ready to bring the noise. For something a bit sneakier, Nantuko Shrine gets pretty incredibly scary when you have 11 Rats in your yard. Even without packing your graveyard full of Rats yourself, you can rest assured that your opponent is going to want to keep the little buggers off the table. Living Death and Nantuko Shrine both works wonders here (though you'll surely want to beat up anyone who comes with Cephalid Shrine).

It almost seems unnecessary to run a card like Soul Foundry with the Rats, but I feel like it does need to be mentioned. In a sense, you're getting away with a little bit, but it almost doesn't feel worth it. Sure, you're getting Rats out that don't cost you any cards (after that imprint cost), but you should just generally find yourself with a lot of copies of the Rats anyways. After all, you do get to play with as many as you'd like. Still, at least your hand size isn't going down.

As I sifted through card after card in hunt of ways to abuse the Rats, one of the most enticing to cross my path was Desperate Research. Here's a card that always seemed like it was so close to being useful, but wasn't quite there. Even without any kind of shenanigans, a cold casting of Desperate Research should net you something like 3 to 4 Rats all by itself. A truly lucky Research might net 6, or even the full 7. But, why actually wait to get lucky? Why not stack your deck with Scroll Rack to make sure that you'll get a huge mittful of Rats? I tried this combo out a bunch of times, and it was almost always way too good. I drew so many cards I found myself having to discard most of them. (Maybe I should have been running a Spellbook as well!)

Lastly, I didn't think I could make an article like this complete without mentioning a card that my old boss at The Dojo used to run, Remembrance. With a Remembrance out, you will have no end of Rats at your disposal. Whenever you lose a member of your little pack of Rats (or even if you lose the whole pack), you should have a near endless supply ready to repopulate your forces.

With so many ways to work with the Rats, I thought I would give you all two takes on the same idea. Here they are:

This one doesn't run any tricks to put the little ratlings into the graveyard to help power out the Nantuko Shrine. It does make the assumption that if they aren't killing your Rats, they are dying to them. This isn't an unfair assumption either. If your opponent has cleared your board of creatures, either the Shrine or the Pack Hunt are going to be able to help you on the road to recovery.

This deck is pretty straightforward. It just wants to draw Rats and put them into play. And it's pretty good at that. Stacking the deck with the Scroll Rack can refill the hand really easily thanks to Research, and the search lands help to shuffle things up. Vampiric Tutor doubles as a way to find the cheapening power of Jet Medallion, or to get the combo rolling with either Research or Scroll Rack.

I hope that you find the Rats as exciting a concept as I did. I'm not sure if they're going to make the cut into the tournament scene, but I'm pretty confident that they are going to be wildly popular in any case.