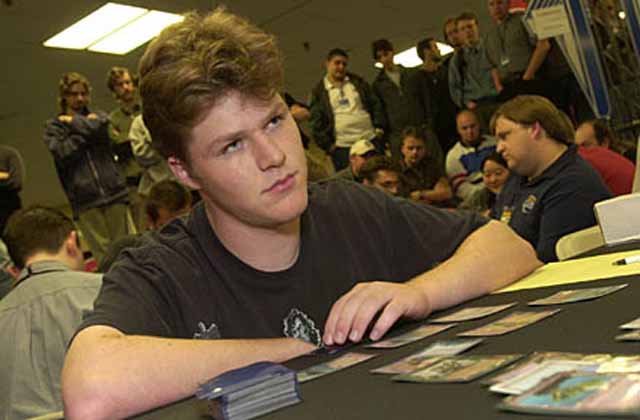 Ben Rubin is a consistent Pro Tour performer, with multiple top eight finishes at Pro Tour events, including PT-NY '00. Ben was playing TS, a blue/green "semi-control" deck that featured Survival of the Fittest, the standard green mana creatures (Birds of Paradise, Quiron Ranger, and Wall of Roots) and four Tradewind Riders to gain control of the board. It also had a few Morphlings and one Deranged Hermit just for general beatdown. Jason Zila is an old-time Magic player who has not played for nearly two years, but was lured back to Magic by the big money being given out at the Masters (he wasn't even invited to Pro Tour New York). Appropriately, Jason was playing a deck that is derived from another old time deck: Mike Donais' Five Color Blue deck, which featured many counterspells, Wall of Blossoms, Wrath of God, and Gaea's Blessing. Jason has updated it somewhat, taking out the Gerrard's Wisdoms (not much Sligh in modern Extended) and putting in Morphling as a kill card. 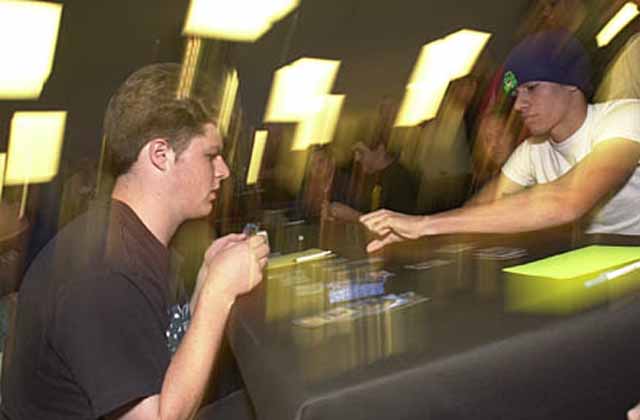 Ben got off to a fast start with Birds of Paradise. He then cast Land Grant to get a Tropical Island, and then cast a Quiron Ranger, thus setting up his mana base very well. He then tried to cast an Ophidian. Jason tried to Mana Leak the Ophidian, but Ben Counterspelled the Mana Leak, and the Ophidian hit the board. Jason wasn't too worried, however, as he cast a Wall of Blossoms to shut down the Ophidian. A few turns later, Ben had managed to get two Survivals of the Fittest in his hand and two Forces of Will. This looked like a perfect opportunity for Ben to force a Survival on the board, so he cast his first Survival, which was countered with a Forbid from Jason. Ben then tried to cast his second Survival. Jason cast Counterspell in response, and in turn Ben used Force of Will on the Counterspell (removing his other Force from the Game). But Jason had his own set of Force of Wills, and so he managed to keep the Survival off the board. This demoralized Ben, but he soon topdecked another Survival - only to have it countered by Jason's third Force of Will (cast the hard way). Unbelievably, Ben then drew his fourth Survival - and Jason had his fourth Force of Will! That's four Survivals from Ben, and four Force of Wills from Jason, if you are counting. Jason soon afterwards cast a Morphling, and beat Ben to death with it, despite a late Tradewind from Ben.

Sideboard: Ben sideboarded in four Back to Basics and one Daring Apprentice, taking out some anti-creature creatures (Spike Weaver, etc.) Jason put in his four Pyroblasts, and some Phyrexian Furnaces. 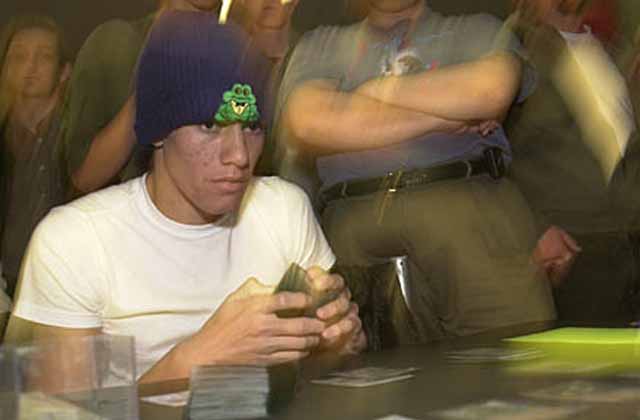 The first move was made by Jason Zila, who played a Phyrexian Furnace. Jason quickly realized, however, that the Furnace was really only good against one card in Ben's deck (Squee), and so he sacrificed the Furnace to draw a card. Ben, meanwhile, played a Tradewind Rider that got Plowed, and then a Daring Apprentice that was Pyroblasted. Jason then tried to play a Morphling. Ben Brainstormed in response, hoping to find another counterspell (he only had one Counterspell in his hand). He got a Survival of the Fittest, but no counter. He then tried to Counterspell the Morphling, but Jason had a Pyroblast waiting. Although a Morphling on the table usually spells disaster for an opponent, Ben rallied; he played his Survival of the Fittest, and then went to get a Tradewind (he didn't try to abuse Squee because Jason had another Furnace in play). Ben cast the Tradewind, and Jason was forced to cast Wrath of God, killing his own Morphling (as well as a Tradewind, 2 Birds of Paradise, and a Quiron Ranger that belonged to Ben). Jason, however, had another Morphling. Ben got a Deranged Hermit with the Survival, but he did't have anything to stop the flying Morphling. Jason wins.