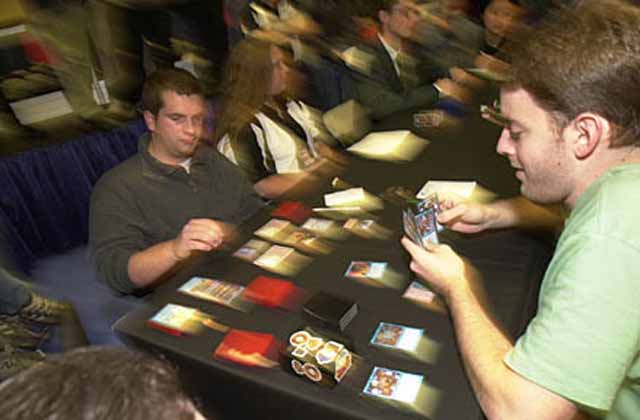 The Master Series was down to the final eight and everyone knew that a lot was on the line. In addition to the thousands of dollars up for stake in each match, all of the players who were still in contention knew that they were just three match wins away from achieving the title of the very first Master Series Champion.

This match featured Dirk Baberowski from Germany, an ex-Rookie of the Year and a player who has a lot of experience at Pro-Tour level. His opponent Trey Van Cleave had recently moved from the USA to live in Europe and he too has had some great results in the past. While not making as big an impact on the Pro Tour scene, Trey is one of the few players in the world to have two Grand Prix wins to their credit winning both GP San Francisco and GP Philadelphia.

Dirk played the new version of Trix. A lot of the players in the Master Series thought that Trix was dead in the water after the recent bannings of Mana Vault and Dark Ritual, but Dirk proved this isn't the case. He was one of the two players playing Trix in the top eight and at this stage a Trix on Trix final was still a possibility. Trey, on the other hand, was playing Slivers which was a favorite Extended deck of many players. He had a reasonable match-up against Dirk as his deck was one of the few in the field that actually looked prepared to face off against Trix. With four Aura of Silence and three Annul main deck, he had a lot of cards Dirk didn't like, and things only got worse after sideboarding. 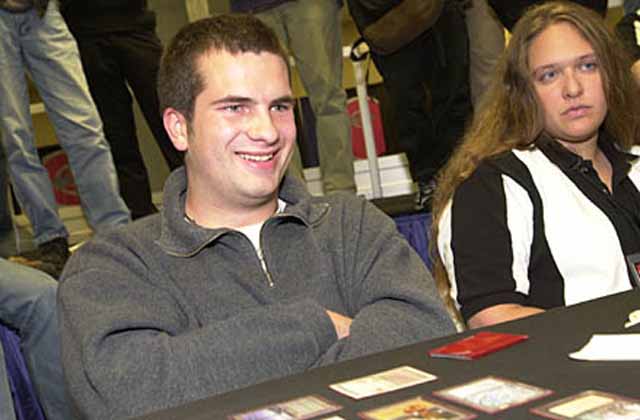 Dirk won the roll and elected to play first, something that definitely made him favorite for game one as both players needed to get to three mana to play their game winning enchantments - Necropotence for Dirk and Aura of Silence for Trey.

Dirk started slowly only playing lands over his first four turns. He knew that Trey had several Dazes in his deck and was looking to play around these. In addition, Trey had kept a one-land hand and missed land drops on his second and third turns and so Dirk knew he wasn't under any pressure. Trey hit a second land on his fourth turn and Dirk cast Demonic Consultation in Trey's end step looking for a Duress. He found one but removed two Force of Will and two Donates in the process much to Trey's approval. Dirk's Duress showed why Trey had kept a one-land hand as Trey had three Daze, two Force of Will and a Demonic Consultation in his hand. Dirk removed a Force of Will and passed the turn. He tried for his first Necropotence during his next turn hoping to pull the Force of Will from Trey's hand that indeed he did. With both Forces of Will removed from Trey's hand Dirk went for his second Necro on the next turn. Trey Consulted for Annul but this time it was Dirk who had the Force of Will. Trey had drawn well however and he showed Dirk his third Force of Will and Dirk had no option but to let the Necropotence go. However Dirk was not finished, as he too had an exceptional draw and asked Trey to find an answer to a third Necropotence on Dirk's next turn. With his hand very much depleted Trey had nothing to stop it and the Necropotence resolved. At this stage the game was pretty much over, Dirk used the Necropotence to draw an extra thirteen cards, and Duressed Trey before casting Illusions of Grandeur. The Illusions gave Dirk more than enough life to draw the rest of his deck and find the last Donate which when cast prompted a swift concession from Van Cleave.

Game one finished in very different circumstances. Trey's first spell of the game was a fourth turn Crystalline Sliver. Dirk thought for a long time about this as he had decided to sideboard out his combo and go for a win with Phyrexian Negators and Firestorms instead. Knowing the Crystalline would hamper this strategy significantly Dirk Consulted for a Pyroblast to counter the Sliver. To Dirk's horror three of his four Negators were removed from the game in swift succession and a few cards later the fourth and last Negator was also removed before Dirk had flipped over a Pyroblast. With no Negators and no combo Dirk had no way to win left in his deck and conceded game two. 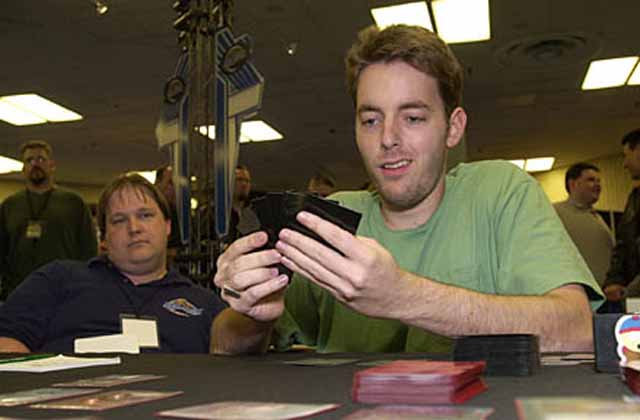 The third game started with a second turn Crsytalline from Trey to which Dirk had no answer. Dirk played out a Negator on his third turn but this was met with a Daze from Trey. Trey attacked and also upped the stakes a Hibernation Sliver. Dirk gets a Necropotence into play on his following turn but is already under significant pressure from Trey's Slivers and decided to draw only six cards going to twelve life. Trey tried for a Muscle Sliver next turn and Dirk has no Force of Will so Trey's next attack took Dirk very low, down to only six life. Dirk Duressed Trey in his next turn and Trey responded by using the one spell in his hand, an Erase, to take out Dirk's Necropotence. Normally removing a Necropotence after has hit play is a bad idea but this time it was a fine play. If Dirk tried to win with Negators it left him one left permanent in play to sacrifice, and if he tried to win with Illusions it would mean he would be unable to use the life gained to draw more cards. Dirk did indeed have Illusions and chose to draw five more cards with the Necro in response to the Erase going to just one life. The Illusions took Dirk to twenty-one but without Necro Dirk had to see a Donate in those five cards, or in his next two draw phases. Luck wasn't with Dirk however and his next two turns he was only able to pay the upkeep on the Illusions whilst desperately looking for a Donate or a way to search for it. On his last draw phase Dirk had just enough mana to pay for the upkeep on his Illusions and cast Donate should he draw it but he drew Necro and conceded the game and the match to Trey.