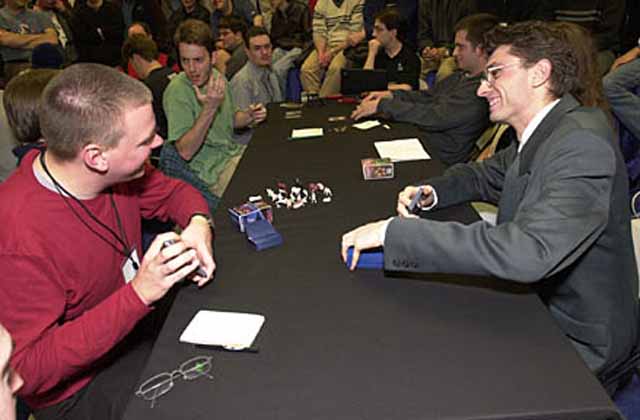 One of the quarterfinals of the Masters was a replay of the finals of 2000 Pro Tour New York. Sigurd Eskeland from Norway faced Warren Marsh in a game where Sigurd's odds were against him. The Norwegian came to New York without an Extended deck for the Masters, and he borrowed the deck and the cards off - yes - Marsh. In his first match using the deck, he used the John Ormerod creation to beat Steven O'Mahoney-Schwartz. Then he proceeded to defeat Marsh's Euro Alliance teammate Alex Shvartsman in his second match with the deck.

Regardless, the Englishman was confident before the quarters. With between 200 and 300 playtest games under his belt, Marsh estimated his chances of winning to be around 75 percent before sideboarding and the same after sideboarding. "Normally it's 90 percent after sideboarding, but I'll say 75 because of the changes you made," Warren smiled before the match. "There is never a 90 percent matchup in Magic - except from when I draft against you," Sigurd quickly replied, and the audience laughed. They continued to do so throughout the highly entertaining match that generally had a really friendly atmosphere with a lot of good-natured trash-talking.

Eskeland picked the tree before the coin flip, and the tree landed face up so he got to play first. Unfortunately, he had to mulligan, but he kept his second hand and played a Tropical Island and a Birds of Paradise. Marsh dropped a swamp and then a Mox Diamond, discarding an Underground River, and yielded priority.

Eskeland didn't do anything but playing an island during his second turn, but Marsh had plenty of stuff to do during his end of turn step. He cast a Demonic Consultation, calling Necro, and he got a perfect consult, getting the Necro as the seventh card. Then he tried to copy that performance by Consulting again, this time for a Duress.

The Duress came up, but as the 14th card - and by that time, all the three Donates in Warren's deck were removed from the game. "In all the times I've played the deck, this is the first time that has happened," Warren said - and conceded.

After celebrating the first game victory properly, Eskeland sat down to sideboard. He took in several anti-combo cards, but left in some crucial creatures. Warren, on the other hand, sided in his Phyrexian Negators and Firestorms while taking out his combo. The Englishman opted to go first, and he played swamp, Duress. Eskeland's hand consisted of one Force of Will, two Land Grants, one Taiga, one Birds of Paradise, one Survival of the Fittest and one Llanowar Elves. Marsh got rid of the Survival.

During his own turn, Sigurd went Taiga, Birds of Paradise. He then let Warren take his turn, in which he played a Gemstone Mine and said go. Eskeland drew, then he played Brainstorm. "This card is so good," he said as he drew the three cards. He then played Land Grant, showing Warren and the audience his new hand - a Counterspell, a Force of Will, another Survival of the Fittest, a Land Grant and a Wall of Roots. Playing the Tropical Island he had fetched from his library, he then dropped the Survival of the Fittest. 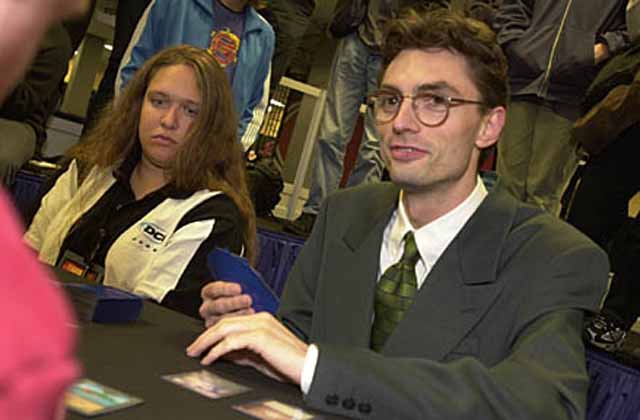 Warren wasn't particularly happy about that. In response, he cast Demonic Consultation for an Annul, which came up as his tenth card. He then tried to Annul the Survival, but Sigurd found it important enough to use the Force of Will to protect it. Removing the Counterspell from the game, he Force of Willed the Annul, and the Survival came into play. Sigurd then cast Land Grant again, showing the Wall of Roots left in his hand, and after finding another Tropical Island, he ended his turn.

Marsh did absolutely nothing during his turn, as he didn't draw a land to cast the Negators in his hand. So Sigurd got to go again. He played the Tropical Island, then he activited the Surivival twice, first discarding the Wall of Roots to get Squee, Goblin Nabob, and then discarding Squee to get a Quirion Ranger, which he played. During Sigurd's end of turn step, Warren played a Demonic Consultation to get his third land. He dropped it on his turn, and let Sigurd go again.

Sigurd knew he would have to remember to return the Squee from his graveyard to his hand during his upkeep, and he asked head judge for the Masters, Elaine Chase, if he could mark his library. As that was not allowed, he started scribbling down "Return Squee" with capital letters on his scorekeeping pad - but promptly learned that writing it down wasn't allowed either. So the leaf was ripped off his pad, and Sigurd tried repeating "Return Squee!" to himself so that he wouldn't forget.

He didn't forget it. During his turn, he returned Squee, played an island, and then he activated the Survival to get a Tradewind Rider, which he played. Then he attacked with the Quirion Ranger, knocking Warren down to 17 life. Warren continued to try and improve his board position. He cast Vampiric Tutor again, this time searching for Necropotence. He then played it, and drew six cards, going down to nine life. Warren discarded another Necro and a Tutor, and ended his turn.

Sigurd returned the Squee from his graveyard, and he then activated the Survival to get a Spike Feeder. "I had hoped you sided those out," Warren said, but Sigurd just shrugged and smiled. The Norwegian then cast the Feeder and activated the Tradewind to return a swamp to Warren's hand. He then sent hte Ranger in for another point of damage, before activating it to untap the Birds of Paradise and returning a Tropical Island to his hand so that he could re-cast it.

During his turn, Warren played a Gemstone Mine. He then Activated Necro for five, and with a hand full of cards, he played Firestorm for five, targeting all of Sigurd's creatures and Sigurd himself. But his opponent had a Counterspell, which he naturally chose to use. In response, Warren cast Demonic Consultation and got a Force of Will as his eleventh card. Discarding a Brainstorm and going down to two life, he managed to get the Firestorm to resolve, but he was dangerously low on life. 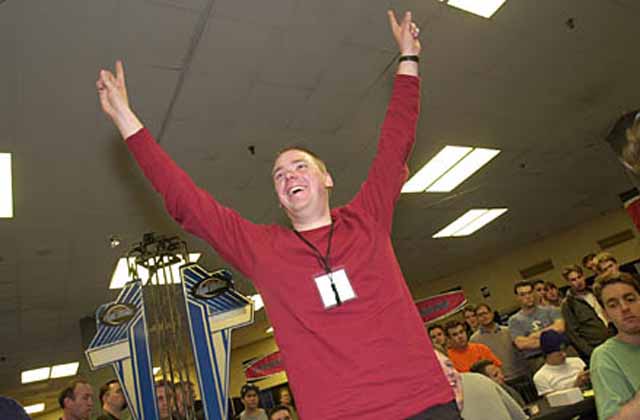 At this point, Sigurd wondered if Warren could win or if he just played for the crowd. But before Warren could answer, Sigurd added that he'd like to actually beat him, and took his turn. He returned the Squee to his hand, activated the Survival to get an Uktabi Orangutan and dropped a Taiga and a Birds of Paradise. Then, Warren's Phyrexian Negator came into play.

Sigurd wasn't really worried though. He almost forgot to return the Squee, but remembered as his hand was on his library to draw a card. After drawing, he cast a Land Grant, showing the Squee, got a Tropical Island and activated the Survival to get another Tradewind Rider which he played. Warren dropped another Negator and attacked with the first one, but Sigurd merely took the damage. The Norwegian returned the Squee, who had done a really good job, to his hand, activated the Survival - and got the one card Warren didn't want to see - the Masticore that he had left in his deck. "I thought you might have left that in," Warren noted, and when his Negator was bounced, he conceded, once again losing to Eskeland in a rather important match. "So much for testing two million times," he sighed, while Eskeland couldn't do anything but smile.