The Magic 2012 Core Set and Duels of the Planeswalkers 2012 introduce some new terminology to the Magic universe, and the core set brings back a few things you might or might not have expected.

Some keywords, like infect or exalted, show up in a set (or a group of sets, called a block) but aren't in subsequent sets by default. Other keywords, like flying and lifelink, are considered "evergreen" parts of the game. They can appear in any set, and most sets feature all of the evergreen keywords on at least a few cards. 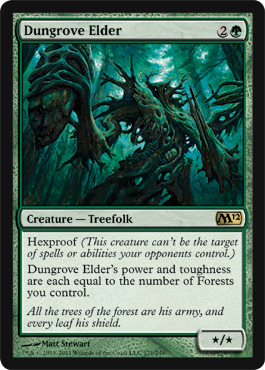 Like most of the evergreen keywords added to the game since its beginnings, hexproof isn't a new concept. It's the keyword version of a familiar ability seen on cards such as Troll Ascetic and Sacred Wolf. Those two cards—along with all the other cards that have text that exactly matches what hexproof does—have received updated official wordings with the new keyword.

"When [this card] is put into the graveyard from the battlefield" is a mouthful, and when people are talking about cards informally, they're more likely to say something shorter such as "When [this card] dies." Now—specifically in the case of creatures—that's what the cards say as well. 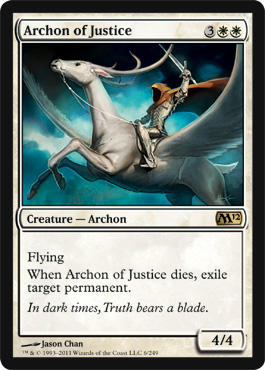 "Dies" and "is put into a graveyard from the battlefield" mean the same thing, so there are no functional changes resulting from this change. In other words, the new terminology doesn't change how the cards work; it just makes a certain subset of cards easier to read and talk about.

In addition to evergreen keywords, some recent core sets include keywords from the past. The Magic 2012 Core Set features the bloodthirst keyword from the Guildpact set: 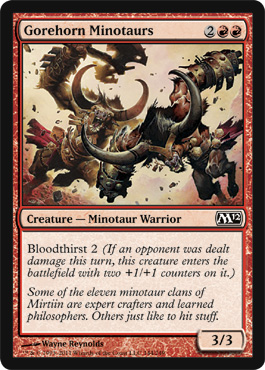 Planeswalkers have been part of the game since their debut in the Lorwyn set in 2007, and by now most players are comfortable with how they work. Nothing in the planeswalker rules has changed; what follows is a refresher on the finer points of playing with planeswalkers. 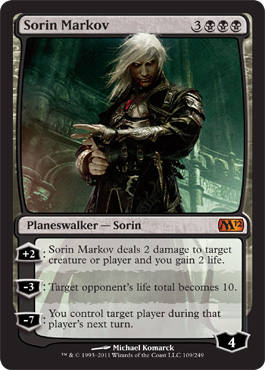 Each planeswalker has a subtype. For example, Sorin Markov says "Planeswalker — Sorin" on its type line. If two or more planeswalkers that share a subtype are on the battlefield, they're all put into their owners' graveyards.