Membership Has Its Privileges

only get one preview card this time around, so I made sure to make it count. At first glance, the Orzhov may not seem like the strongest guild. Chris Pikula has taken a deck with Orzhov flavor and proven it is a serious competitor in Legacy, but White/Black is not thought of as the same kind of staple as Red/Green beatdown or a Red/Blue deck full of spells. It also probably is not yet clear how the cards come together as a strategy, but once the whole picture is in place it will become clear that this guild is here to stay. Today I'm here to offer the most important piece of that picture.

I have done a lot of set reviews and card previews in my day, but those were always speculation. The only way to know for sure how good a card is or what role it plays is to put it into your decks and see what happens. Report back after you're done. Luckily for me that is exactly what I got to do with today's card and the rest of the Orzhov guild. Most gold cards are flexible, able to adapt to a variety of strategies but holding special value to the ones where they fit best. Then there are the flagships that form the foundations of the strategies of entire color combinations while their casting costs reward that same focus. I can say with confidence that this card is the best and most important reason - but far from the only reason - out there to play with the Orzhov guild. 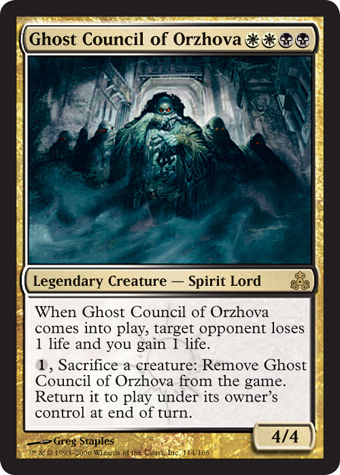 I got a chance to glance at the Guildpact file shortly before it was handed off. I noticed this card, but I didn't come close to appreciating how good it was. Ghost Council is far more frustrating to play against than it seems to be at first glance. Its only real weakness is that its casting cost prevents other color combinations from trying to appropriate it for their own use. This card is so strong for its cost I've seen it brought out with Chord of Calling from decks where

would be considered a pipe dream. It may be a legend, but I don't hesitate to pack four copies in my White/Black creature decks.

Ghost Council starts out with solid stats, a 4/4 for four mana, then adds on two synergistic abilities that make players slump in their chairs when Ghost Council is announced. Take my word for it, I've seen the slumps and done my share of the slumping. The reason for that is that it is all but impossible to remove Ghost Council without going to a great deal of trouble, and while you're trying to deal with it, the Council will be draining your life away. The one point you drain from your opponent when you cast Ghost Council is nice, but the ability's true power comes from triggering it multiple times – and the threat of doing the same.

That's because Ghost Council's second ability is the real powerhouse. By sacrificing a creature, you can save Ghost Council from almost any form of removal or have it survive any combat. You can also use it to effectively grant Ghost Council vigilance – and if it would die while blocking, you can use the ability again. When your opponent tries to kill your Ghost Council, the best he can hope for is kill your Dark Confidant, or your Hypnotic Specter, or your Guildmage, and that's if you don't have any true sacrificial lambs lying around. Who said anything about playing fair? Sometimes you get to sacrifice a token you got from Teysa, Orzhov Scion (or elsewhere, but one preview card at a time), or sacrifice your Orzhov Pontiff, or trigger a haunt effect. 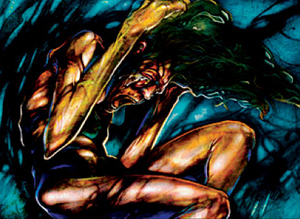 The key to the Orzhov guild is that all of its pieces work together. Ghost Council is solid in any deck with the mana to cast it and some disposable creatures, but the rest of the Orzhov toolbox makes it a lot stronger. In that toolbox, it has what it takes to handle almost any problem and all those tools feed into each other. Every time you sacrifice a creature you're encouraging Teysa, which gives you more to sacrifice and enables all your haunt cards. It even gives you control over when your haunt cards trigger. If good old Dark Confidant is no longer looking like such a good idea, give him his well-earned seat on the Ghost Council. They're always looking for new members.

These guys are for real. Look at what they can do against all the other guilds out there.

There have been concerns voiced about how anyone is going to deal with the raw power that is the Gruul. There's no question, the Gruul are offering some very large numbers at exceptionally cheap prices, but smashing things is not all there is to life. The last thing a straightforward and angry Gruul deck is going to want to see is a wheeling and dealing group of Orzhov. How do you attack into a Ghost Council, and how do you remove it? Meanwhile, that Orzhov player gets to dismantle the few remaining threats as the life drain puts him out of burn range. They're also going to be ahead on cards thanks to cards like Orzhov Pontiff taking out Birds and Elves – and what might be one of the nastiest sideboard cards you've seen in years. If they reach for the fat, you've got defenses against large men with removal in Black, gold and even White. If they or the Boros try to swarm you, you've got that covered too. They can try to rush you out of the game, but you'll have multiple good choices for one-drops and more quality two-drops than you can fit to keep you on pace into the midgame. 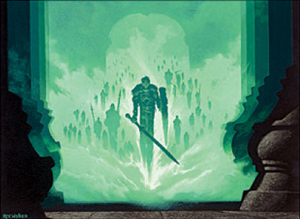 Then there's the Selesnya, whose infamous Ghazi-Glare deck and its variants captured Worlds and have emerged as one of the strongest strategies. You'll be able to handle that too. You get several creatures that provide card advantage and that they can't remove while you have naturally maindecked answers to their biggest problem cards and plenty of sideboard cards to finish the job in games two and three. If their Saproling army gets out of hand, you have a natural answer for that too.

Ghost Council is one of those cards that wins the game in all sorts of subtle ways in addition to its main advantages. Whenever one of your creatures dies, you get a two-point life swing. If they allow themselves to dip too low on life, you can go for the direct damage win, giving your creature deck reach even under a Glare of Subdual lock. Every time your opponent attacks on the ground, you get to block two creatures and take out anything without five toughness at the cost of a single token. If they Wrath, you keep four power on the board, assuming Tesya doesn't make things worse. There are good one-drops, both the old faithful hound and a new weapon. No White creature deck will ever want for two-drops. You've got two great three-drops and a four-drop that drives your opponent into fits.

Another thing worth noting is that the ability to sacrifice your creatures whenever you want to is more valuable these days than it might seem, even if you're not abusing your own abilities. There are many staple cards like Lightning Helix and Threads of Disloyalty that have their effectiveness substantially reduced, but the big one is Umezawa's Jitte. If your creature isn't there to deal damage they don't get the counters, a trick players have been pulling for almost a year with Sakura-Tribe Elder. That's another powerful weapon this card fights against.

You compete by being good at what you do, the same way the Orzhov are good at what they do. I'm not claiming that these shadowy traders are going to be the only game in town or even that they'll dominate the arena, but cross swords with them at your peril. Wars are often won at the marketplace, and the Orzhov seem to always get something extra out of every deal.