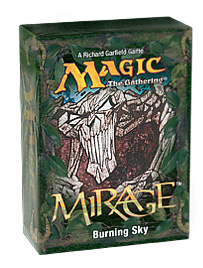 he "Burning Sky" deck was constructed by the readers of MagicTheGathering.com through a series of online polls. The result of the "You Make the Mirage Theme Deck" campaign is a deck filled with deception, aggression, power, and guile. The forces of an angry earth are at your command.

The "Burning Sky" deck's wide range of Efreets, Djinns, and Elementals let you scorch clear the battlefield or simply fly above any defenders. Funnel red mana into Wildfire Emissary and Pyric Salamander for maximum power. Sacrifice Flame Elemental to burn out a problematic creature on the other side of the table. Let Suq'Ata Firewalker deliver a precision 1-damage strike to any target, or have Subterranean Spirit zap everything (except itself) at once. Be careful, though—the Firewalker's ability won't protect it from Subterranean Spirit's blast.

While fire rages on the ground, take to the air with your flying creatures, including Mist Dragon, Vaporous Djinn, Teferi's Drake, and Harmattan Efreet. These creatures are as unpredictable as the wind they inhabit—the Djinn and Drake have phasing, the Dragon gains and loses flying at your whim, and the Efreet can make even your most lead-footed creatures float away on the breeze by giving them flying. Burning Palm Efreet and Incinerate keep the skies clear so your attackers can coast in on the gusts of victory.

Flight and fire are fickle and lend themselves to trickery. Harmattan Efreet and Burning Palm Efreet can team up to give any one of your opponent's creatures flying, and then deal 2 damage to it and make it lose flying! Power Sink and Dissipate disrupt your opponent's plans, while Meddle grabs hold of those plans and twists them around to suit your purposes. You've got some burn spells to singe your opponent's creatures—or your opponent. Thanks to Dream Fighter and Boomerang, you also have the ability to make creatures vanish at opportune times, leaving any who dare to oppose you windswept, singed, and completely discombobulated.

After you've played some games with the "Burning Sky" deck, you may want to alter it a bit. The Mirage set has a couple of perfect cards for both the theme and the color scheme. Emberwilde Caliph matches the deck's brute force theme. It's an aggressive, flying, trampling Djinn that, while painful to you, brings the fight to your opponent. Frenetic Efreet, on the other hand, is a quick flying creature that matches the deck's tricky nature. When in danger, it might phase out to save itself . . . but its fate is left to chance! Even a fifty-fifty chance to live another day means your opponent will be reluctant to toss any removal spells in its direction. Other thematically appropriate cards to consider include Shard Phoenix from the Ninth Edition set, Halaam Djinn and Zanam Djinn from the Invasion set, and the Mirrodin set's whimsical Quicksilver Elemental. 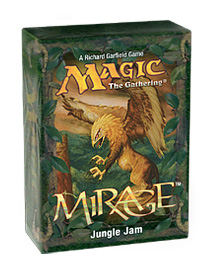 onstructed by Magic Online tournament winner Markus Pettersson, the "Jungle Jam" deck lets you truly unleash your animal instincts. This aggressive deck can accumulate an unstoppable Griffin air force, aided by an array of angry animals on the ground. Bare your claws, growl, and attack!

Spend the first few turns of the game developing your mana. It's crucial that you get to the point where you can produce four mana as soon as possible. Thanks to the deck's numerous copies of Rampant Growth and Quirion Elves, though, that might be as early as turn three. Then it's time to start building your flock.

The "Jungle Jam" deck's main offensive thrust comes in the form of its nine Griffins. Eight of them are very similar: Each is a 2/2 creature with flying that costs

and has some other ability. Generally, that other ability isn't as important as simply being able to fly over your opponent's defenses to deal damage. Multiple 2-damage hits add up quickly, and if the legendary Zuberi, Golden Feather is around to rally your feathered troops, each Griffin strikes for 3 damage instead. If something goes wrong with this plan, however, Teremko Griffin's banding ability can help outmaneuver a flying blocker or, if left back to defend, can often ward off enemy attacks. Even better, Mtenda Griffin's ability allows you to recoup any fallen Griffins.

The rest of this deck's creatures can either slow down your opponent's counterattack on the ground, or they can support the Griffin attack to keep your opponent reeling. Sawback Manticore is especially good at leaving your opponent without any good combat choices either way, since its ability threatens to take out an opposing attacker or blocker before it can deal combat damage. Keep in mind that although the Manticore must be involved in combat to use its damage ability, the creature it shoots down can be blocking or blocked by something else -- or unblocked entirely.

Although there's only one Mountain in the entire deck, Quirion Elves, Rampant Growth, and fetch lands like Grasslands and Mountain Valley make it easy to produce red mana for the Manticore when you need it. If you already have the Mountain and a Plains in play, your best bet is to fetch Forests to make Foratog as threatening as possible.

After playing with the deck for a bit, you can take it in a few different directions. To get more defensive on the ground while still unleashing your Griffins as quickly as possible, try the Mirage set's Wall of Roots. If you'd like to expand the Griffin theme, the Eighth Edition set's Diving Griffin provides a three-mana-cost addition to your flock, while the Onslaught set's Shared Triumph shares Zuberi's ability to give each of your Griffins +1/+1. To follow the "zoo" theme of rampaging animals, the Invasion set's Jade Leech and the Ninth Edition set's Emperor Crocodile are among the many choices available to you. 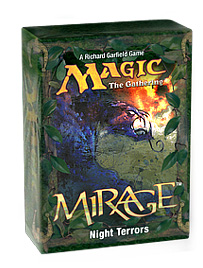 uilt by MagicTheGathering.com columnist Jay Moldenhauer-Salazar—with ample help from his readers—the "Night Terrors" deck ensures that the thing that goes bump in the night is you. Loaded with more creepy-crawlies than a haunted cemetery on Halloween, this deck is sure to give your opponent something to scream about.

At heart, the "Night Terrors" deck is a beatdown deck with some tricks up its sleeve. Your best course of action is to play out efficient attackers and, well, attack with them. The deck features two tremendously efficient flying creatures: Skulking Ghost is a 2-power creature with flying that costs only two mana, and Feral Shadow provides the same power and evasion for just one mana more. Neither creature is durable, but their goal is to damage your opponent in the early game—you'll have more devious tricks to pull later.

As the game progresses, you'll be able to take the upper hand in a creature standoff. Many of your creatures make it impossible for your opponent to attack or block without taking casualties. Urborg Panther takes out blockers, Wall of Corpses takes out attackers, and Dread Specter takes out both. You'll lose your creatures as well—but you don't mind! Shallow Grave, Bone Harvest, and Soulshriek all reward you for having a nice, full graveyard. Gravebane Zombie keeps coming back each time it dies. If you keep trading creatures in combat with your opponent, you'll win that war of attrition because you hold the keys to the graveyard. If you're not trading creatures, that means your opponent must not be attacking or blocking. Perfect!

While Ghosts and Shadows and Specters are scary, they don't hold a candle to the deck's ultimate frighteners. Ravenous Vampire keeps growing as long as you keep feeding it. If you've got a Gravebane Zombie, you can sacrifice the Zombie to the Vampire during your upkeep, put the Zombie on top of your library, draw it, and play it—every turn! Since you don't mind if any of your creatures gets eaten, the Vampire shouldn't have a problem getting nice and fat. The granddaddy of all spooks, however, is Spirit of the Night. It's not just a 6/5 creature with flying, trample, haste, protection from black, and first strike when it's attacking (and rest assured it'll be attacking)—it's a ridiculous, game-winning monster that you can put directly into play from your library for free! All you have to do is sacrifice its loyal minions Urborg Panther, Feral Shadow, and Breathstealer.

After creeping out your opponents with this deck, you might want to make it even scarier. The Mirage set's Tombstone Stairwell is about as perfect an addition as you can find. The more creature cards you have in your graveyard, the better it is, and its cumulative upkeep cost shouldn't pose a problem. The Ninth Edition set's Mortivore and Grave Pact are a couple of other eerily good ways to take advantage of your vampiric tendencies. 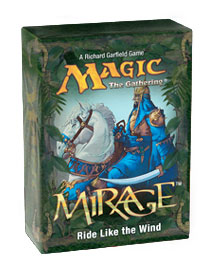 f you like attacking, the "Ride Like the Wind" deck should make you very happy indeed. If you like watching your opponent cringe helplessly at your never-ending, unstoppable onslaught, then so much the better!

The "Ride Like the Wind" deck has a very simple plan: Step 1, play creatures. Step 2, attack with them. Step 3, see step 1. This deck takes full advantage of the flanking ability. Since that ability only works while the creatures that have it are attacking, it's best to keep them charging at your opponent.

While your riders have a clear advantage against a defensive force made up of a number of small creatures, one gigantic blocker provides much more of an obstacle. If you've dealt enough damage to your opponent in the early part of the game, you may want to continue charging forward—sure, you'll lose an attacker each time, but you can replace it, and the damage the rest of your forces deal might be enough to win the game. If that's not an option, then it's time to call for the commanders. Sidar Jabari taps your opponent's best blocker each time it attacks. When Telim'Tor attacks, all your attacking flankers—including him—get bigger. Zhalfirin Commander can pump up nearly all your creatures.

Once you've taken the deck into battle, you may want to modify it to your tastes. It has some spells that can take out potential blockers so you can continue your assault, but you may want more. If so, check out the Mirage set's Hammer of Bogardan or the Ravnica: City of Guilds set's Devouring Light. To make your attackers even more difficult to block, the Seventh Edition set has a couple of enticing enchantments: Goblin War Drums and the oh-so-thematic Knighthood. If you just want to pump up all your Knights as simply as possible, Shared Triumph from the Onslaught set certainly does the trick.