Mirrodin introduces several new mechanics to Magic as well as a completely new card type - Equipment - which adds power and reusability in your decks.

The Moons of Mirrodin

Across the harsh landscape of Mirrodin, an orphaned elf must make her way, seeking the secrets of her past, daring the perils of her present.

(For the Mirrodin FAQ, see the Magic Set FAQs page.)

Far from Dominaria, in a distant corner of the Multiverse, lies Mirrodin, a plane made entirely of metal. Blades of golden grass in the Razor Fields chime in the wind. Huge misshapen boulders are magnetically suspended above the peaks of rusted iron mountains. Elsewhere, a wide sea of silvery liquid reflects the sky like a rippled mirror. On the horizon, four suns rise and set in strange orbits: white, blue, red, and a black sphere of void. It is here that Magic finds a unique story.

Mirrodin offers you an artifact rich environment never seen before in the game of Magic. With 306 black bordered cards featuring the new card design, the set challenges you to arm yourself with the first new card type since Legends - equipment cards. Unlike enchantments, when an equipment card is attached to a creature, it can "fall" back into play even if the creature is destroyed and then be re-equipped onto another creature.

In addition, Mirrodin marks the beginning of a new story with new characters. Glissa Sunseeker, the finest hunter and perhaps the most skilled warrior of the elves, begins her story to find out why the monstrous "levelers" seek to destroy her. It is this search for answers that will begin to uncover the mysteries within Mirrodin. So get set for a grand new world filled with amazing imagery and a fresh new look.

Mirrodin is where it all starts.
Time to Arm yourself. 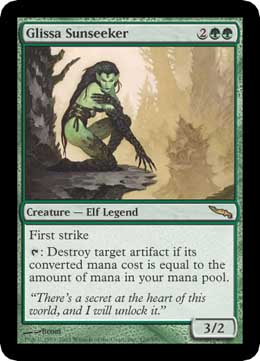