preparation for my Betrayers of Kamigawa preview card, I'd like to take a trip over a year backwards in time. Mirrodin was the fresh-faced new set and Randy Buehler was still writing the Latest Developments column now helmed by Aaron Forsythe. Randy took the opportunity to share the story of how hard it was to find a good wording for Krark's Thumb. In his own words, “Mirrodin has a card that we turned into a legend mostly just because we couldn't figure out what would happen if there were two of them in play at the same time.” Randy elaborated:

As the templating team carefully navigates a new card set through the rules minefield, R&D frequently … walks right up to what the rules experts know is the most suspicious-looking bump and prod it with our pointy sticks. BOOM! And that's what happened with Krark's Thumb. … What we really cared about was making sure players would know what to do if there were two of these in play at the same time. … The tricky bit was making the card both unambiguous and compatible with the Magic rules system.

All kinds of somewhat obscure rules issues kept cropping up to cause problems for all of our elegant wordings (which either "went infinite" or did nothing at all), and all of our rules-tight wordings seemed clunky and hard to parse. After banging our heads against this problem for quite a while, I remembered that the creative team kind of preferred that this card be a legend anyway, so I proposed that we make it a legendary artifact and then there could never be two of them in play at the same time anyway. Thus we no longer needed to solve that particular puzzle. 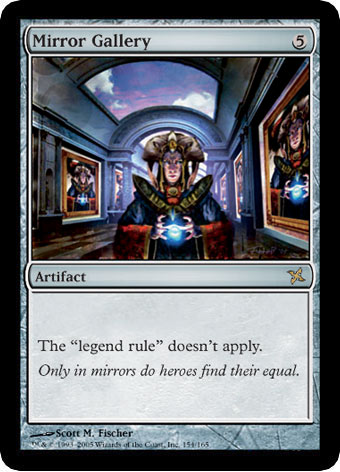 Remember when it was impossible—impossible!—to have two of the same legendary permanents in play at the same time? Y'know, like yesterday? Those days are gone forever. And while most of the time it makes no difference (no one really cares if you have four Gosta Dirks out—those creatures with islandwalk ain't gettin' any less islandwalky), when it does make a difference, it can be huge. The first use that struck me was Krark's Thumb because I still remember all the conversations, both internally and then among the public after Mirrodin was released, about how to get two of those in play and what happened if you did. The duck-the-issue answer was that there was no way to have two Krark's Thumbs out at once, even if you had Karn and Artificial Evolution and some duct tape and a Ouija board. Well, things change. (That's why they make Ouija boards.)

Soooo… what does happen with two Krark's Thumbs in play? Randy actually answered this over a year ago. You get to flip four coins instead of one.

OK, I guess you're bored of Mirror Gallery by now. That's fine; I'll just think of something else to write about. Wait—you say you're not tired of Mirror Gallery? You say you want to hear more about the ridiculous things it does? You say those voices aren't really you because you won't be reading this column for another couple of days, and they must just be inside my own head as I'm writing this? Interesting, interesting.

What does Mirror Gallery work its mojo on?

There Goes the Cemetery

Interestingly, Mirror Gallery hurts Kokusho by shutting off the “legend rule.” One of the best moves you can make is to hit your opponent with a Kokusho a couple of times, then play a second one. The “legend rule” sends them both to the graveyard, your opponent loses 10 life, and you gain 10 life (which rarely matters because the game is probably over). Without the “legend rule” to help you out, the only thing playing the second Kokusho does for you is give you another 5/5 flyer that's nearly impossible to remove safely. Oh well. Tough breaks.

4 Talisman of Unity 2 Time of Need

It seems odd to include legendary singletons in a deck featuring Mirror Gallery as one of its centerpieces, but Mirror Gallery is in there to support the Shrines and Sisay. Sisay can still do her own thing without needing to conform to the “I can have four of the same legendary permanent in play, so I guess I should” line of thinking.

And now is the time for the obligatory plug for the Prerelease. The problem with being all sarcastic about doing it, though, is that I'm actually earnest about the Prerelease. When I was a player, Prereleases were always my favorite sanctioned events. It wasn't just that the cards were new and exciting (though that had a lot to do with it). It was that Prereleases felt so much more communal than any other event. Sure, you were competing against the other people that showed up. But you were also sharing with them—sharing the experience, the excitement, the love of the game, and all the cool new stuff. Even if you're not competitive and have no interest in the tournament scene (and I know that's a lot of you), a Prerelease is a great way to kick off a new set with other pure fans of the game. Check one out near you; they're as casual as tournaments can get.

Until next week, enjoy the Betrayers of Kamigawa Prerelease!
Mark