hen you first looked at Dragon's Maze's Thrashing Mossdog you might have just seen some gruesome Golgari pet. But if you look at the art closer you might realize this isn't just a household pet - even for the Golgari.

Color: Green creature (Golgari guild)
Location: Golgari turf.
Action: Show us a "mossdog" except this one is covered in long, snaking vines. Show it emerging from a cave mouth. The cave is actually an ancient crack that has opened up in the foundation of a massive ruined building. Vines from the back of the mossdog are reaching all around it like some kind of octopus. Perhaps one of the vines has snagged a large bird and is bringing it to its mouth to devour. Feel free to evolve the physiology of the creature but keep it recognizable as a mossdog.
Focus: The large mossdog. 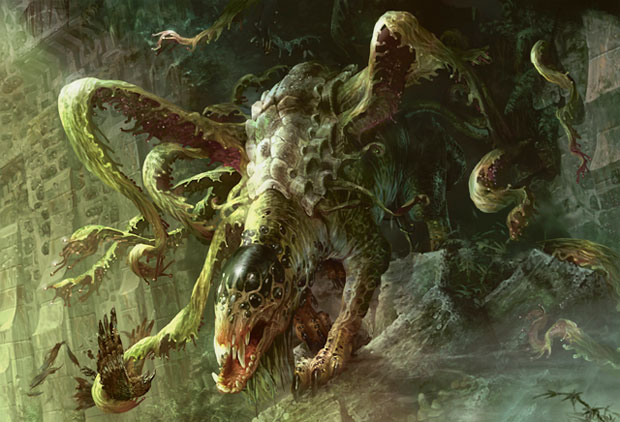 There are two other Mossdogs in Magic. Each mossdog comes from a different set and though they are most well known on Ravnica, the first wasn't even from this plane!