There are almost as many ways to play Magic with more than two people as there are Magic players. These are the most popular, including Free-for-All, Chaos, Grand Melee, Emperor, and Commander/EDH.

While you can use any Magic product in a multiplayer game, some products are specifically designed for use by more than two players. 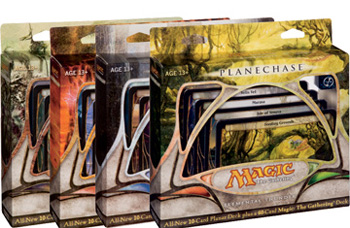 The Planechase plane cards introduce a groundbreaking new way to experience planeswalking. Through this innovative new kind of card, two or more players can battle each other across a variety of diverse worlds, each with its own unique effect on the game. These thrilling new conditions add a whole new layer of chaos, meaning the only thing you can count on is unpredictability.

The Planechase game pack gives you the components you need to play a Planar Magic game. In this brand-new casual variant, you and your friends will take your Magic: The Gathering game skipping across the Multiverse. Each plane you visit (from old favorites you'll recognize to mysterious realms you'll get a sneak peek of) brings its distinctive flavor into your game, bending it just enough to keep things fresh. Planar Magic is an action-packed, larger-than-life way to enjoy your favorite game! 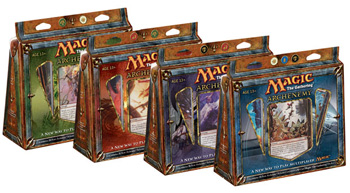 You are the archenemy, and your goal is simple: the utter decimation of your fellow Planeswalkers. A force of unbridled malevolence, your power is so immense that their only hope is to join forces in a desperate attempt to defeat you.

An Archenemy game follows a “one vs. many” format. In this exciting new multiplayer variant, an oversized deck packed with brutal scheme cards allows one player to assume the role of the archenemy, a merciless paragon of power bent on total domination.

The other players in the game must unite to defeat the archenemy and save the day—if they can.

The official multiplayer subforum is the place to post your multiplayer decks for critique and to discuss strategies for various multiplayer formats such as Chaos or Free-for-All, Two-Headed Giant, and Emperor.