Musings on the History of the Magic Pro Tour

first heard about the concept of the Pro Tour one autumn afternoon in 1995. Henry Stern and I were listening to someone from Wizards of the Coast spout nonsense about a paid professional circuit that would begin the following year with a large prize pool and tournaments spanning the globe. This all sounded too good to be true. After all, I'd only received a Hurloon Minotaur jacket and a cool life counter for winning Nationals that year, and taking third at Worlds netted me a box of The Dark boosters.

Then came the call. Mark Rosewater informed me I would be one of about ten players to get an automatic invitation to the first Pro Tour event in New York City. (The rest of the players qualified by being the first to call and register. The phone lines were busy, to say the least.) First prize would be more than $10,000. The thought of actually making money at the hobby that consumed my time astounded me. I began to practice immediately.

Play groups had not yet started; up until then, local competitors were the enemy. In the face of international competition, though, we lucky few sought out quality local players to help us prepare for the big event. I practiced eight hours each day for two months. After all, I could now justify my time with dollar signs.

New York - The Beginning of the Tour

Then came the weekend of the tournament. The streets were covered with snow and the winds made walking nearly impossible. I entered the hotel and saw a group of French players talking. I tried to say hello and received only cold stares. That reaction was not unique. Everyone was pretty uneasy. We all believed we were Magic masters, but most of us were unsure how we would fare in the face of international competition.

In retrospect, our play and deck designs were quite bad. After going undefeated the whole tournament, I lost in the quarterfinals to Preston Poulter and had to watch as Michael Loconto won the inaugural event. While Loconto and Poulter have since disappeared from the tour, other players, like Shawn "Hammer" Regnier, were just beginning to establish their presence. Hammer was the only one of us who had any presence at all. He screamed out to be a star without saying a word.

Pro Tour - Los Angeles brought a sense of familiarity. We "regulars" realized we would see each other several times a year. Local groups started to solidify and the first professional team formed. Mark Chalice, Mario Robaina, Henry Stern, Frank Gilson, Scott Burke, and Preston Poulter formed the Pacific Coast Legends. They asked me to join the group (since living in Utah obviously qualified me as being on the Pacific Coast). Magic "tech" (a term not yet created) was advancing rapidly, so I joined.

I got to sit next to Hammer on several occasions in Los Angeles. I have to admit I was far more interested in his mental tactics than in my own games. His wit and rapport have never been equaled on tour. He had developed the art of getting under an opponent's skin, while making everyone around him laugh. Hammer made the Top 8 for the second straight tournament. 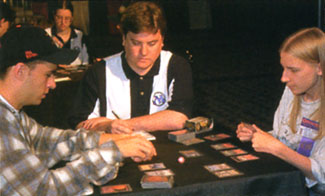 Head Judge Tom Wylie oversees a semifinal match at Pro Tour - Columbus. Eventual Champion Olle Råde (right) defeated Peter Radonjic. Råde was young enough to play in the Junior Division, but chose to play in the Master Division so he could be with his friends. Ironically, they arrived late and he played alone.

The final match between Hammer and Tom Guevin is the most memorable match in Magic history. The pure mental torture Hammer put Guevin through was difficult to watch. I had a unique view from a phone booth where Mark Rosewater and I did the commentary for the finals. The match lasted several hours. In the end Hammer was crowned king of the Queen Mary and entertained us all.

The third professional tournament was the most hectic tournament ever. It was scheduled for the same weekend as U.S. Nationals and limited to one day. Only four competitors would make the finals. The format was Ice Age-Alliances Constructed, and I relied heavily on the team structure. Unfortunately, we put all our eggs in one basket, and paid for it. Pro Tour - Columbus created a new star who would become one of the best players in the game: Olle Råde.

Råde made it clear that various personalities could win big tournaments. Loconto and Hammer made their presence known in any room they entered, but Olle barely made a sound. I don't remember him speaking for the first year on tour. Råde's win dumbfounded most of us. After all, he was young enough to compete in the Junior bracket, which was dominated at the time by names like Finkel, McCabe, and Borer. His third-place finish at Worlds made us all realize Olle would be around for a while (and solidified his place as 1996 Pro Tour Player of the Year).

The atmosphere at Worlds was different from the year before. Where Alexander Blumke won a box of Legends boosters and some miscellaneous packs in 1995, first prize in 1996 was $26,000 - the biggest in Magic history. Players from 37 countries came for three days of competition. Plus, Necropotence totally dominated the Standard environment, so Worlds became a choice between playing Necro or anti-Necro. As the first major tournament where one deck so dominated the field, 1996 Worlds gave birth to the Pro Tour metagame.

After the 1996 Worlds, the Pro Tour invaded Atlanta, and Frank Adler, a really nice guy, won his only Pro Tour event. The team concept kicked into high gear as Wizards ran a $10,000 team tournament (won by the Pacific Coast Legends), and Mike Long cemented his role on the Pro Tour by making the bold statement, "I guarantee I am going to win this tournament" heading into the quarterfinals. He lost in the next round.

Dallas came and went, taking with it the last days of Type I (Classic), as Scott Johns won perhaps the last major Classic tournament - a side event to the main Standard (Type II) event. In the quarterfinals Tom Guevin played Black Lotus, Mox Pearl, and Balance on the first turn. Unfortunately for Guevin, Johns discarded three Guerrilla Tactics to the Balance, dealing 12 damage in return. Classic should be labeled "For entertainment purposes only."

In the main tournament, deck contents started to take on more weight than playing ability. Up until Dallas, a great player could have an average deck and still do well. In the end, youngster Paul McCabe, who would win 1997 Pro Tour Player of the Year, beat an even younger Jason Zila in the finals, marking a trend toward a new ascendancy of young players on the tour.

The next three tournaments were almost identical in their makeup. Good players won and Magic technology advanced. Tommi Hovi won the most controversial finals in Pro Tour history in Los Angeles, and draft reached a new level of sophistication. Paris came, giving Mike Long his time in the sun. New York rolled around for a second time, crowning Terry Borer champion of the Big Apple.

No player had yet repeated as champion.

Then came the 1997 World Championships and with it the first televised Magic event. ESPN2 covered the event, which created a level of excitement that made the event unique. Worlds was expanded to 21 rounds and hosted players from more than 40 countries. In the end, Jakub Slemr - one of the most popular guys on tour - was crowned the fourth Magic World Champion.

The importance of teams kept building, but 1998 brought a changing of the guard. The Pacific Coast Legends gave up their reign to Tongo Nation. Tongo Nation members Mike Long, David Mills, Donnie Gallitz, and Pete Leiher demonstrated the effectiveness of teamwork by placing three of its players in the top nine slots of Pro Tour - Chicago.

In hindsight, teamwork also helped newcomer Randy Buehler break through and win in Chicago. Randy and fellow CMU teammates demonstrated at Chicago, and throughout the remainder of the season, that it takes a combination of teamwork, long practice hours, and a high level of secrecy to win in the current age of Magic.

The next two Pro Tour events showed that perseverance does pay off. Top-rated Matt Place claimed his first major title in Germany, and David Price - long known as the "King of Beatdown" - emerged victorious from a field heavy with mono-red decks in Los Angeles. And yet, even with dominant teams refining Magic tech, no one player had emerged as a lasting, dominant force on the tour.

New York brought the first inklings of the real changing of the guard, as Jon Finkel emerged in high fashion. After ruling the first 13 rounds at New York, Finkel entered the Top 8 with the top-seed curse. No top seed had ever won a Pro Tour event. Of course, no top seed had ever been named Finkel. His victory began a new chapter in Magic history.

Finkel placed third in his next two major tournaments - 1998 U.S. Nationals and Worlds - and fifth recently in Chicago. These tournaments produced other stories, such as Long's misplaced card at U.S. Nationals and Brian Selden leading a group of five Californians to the Top 8 at Worlds. But the main event was always the same - everyone checked on the progress of Jon Finkel.

Four major tournaments in a row produced four consecutive Top 8 finishes. Chris Pikula remarked, "It's a disappointing tournament for Finkel when he only makes the Top 8." The Pro Tour still has not had a repeat champion, but Jon Finkel's consistency has finally shown that hard work, practice, and dedication to the game will be rewarded in the end. Magic is not all about luck anymore. Maybe Finkel will break through and become the first repeat champion. I know I can't wait to see it happen.