My First Week at Wizards

at Wizards of the Coast.... For many of us it's the type of job we've dreamed of since we were kids. "Just think!" we imagine, dazing off in the back of Mrs. Lyon's English class. "Playing Magic ALL DAY! And you get paid for it! What could possibly be better?"

Of course, when I got an email from coverage manager Greg Collins a month ago asking if I had plans for the summer and whether I would like a shot at an internship with Wizards, a few different self-doubting thoughts raced through my mind. Would I be able to hack working behind the scenes instead of just playing games? Was I willing to travel 2,000 miles across the country for a six-month job? What would happen if Mark Rosewater didn't like me?

I knew upon being greeted at reception that I needn't have worried. 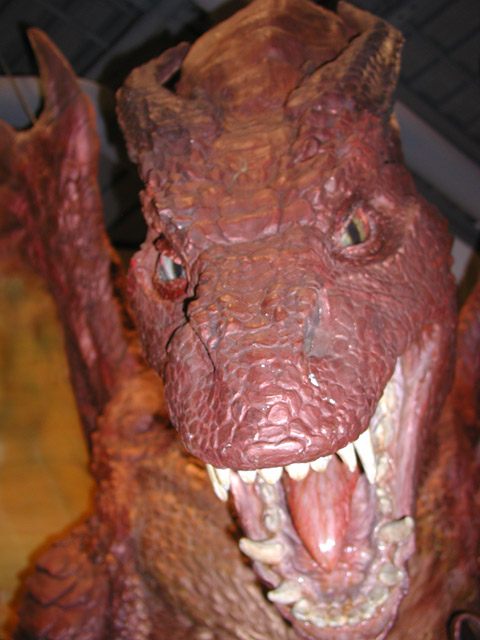 For a gamer, this is actually a friendly face.

A mini-sized Shivan Dragon smiled down on me, wings spread wide as if to say "Welcome to the best job ever, kid!" As I waited in the reception area to start my first week with the company, I took a quick survey of my surroundings. Gaming products virtually filled the walls of the entranceway, with Magic decks, boosters, and boxed sets I was familiar with and other games with which I wasn't. Instead of the usual outdated copies of National Geographic and Time magazine I would have expected to see in most reception rooms, I was met with issues of every gaming magazine you can imagine.

Little did I know that this gamer's dream of a reception area wasn't the only warm welcome accorded to fresh faces around the Wizards offices. After a brief tour of the building our small group of new hires settled in for our orientation meeting where we were each rewarded with a swag bag. Here's what was inside mine: 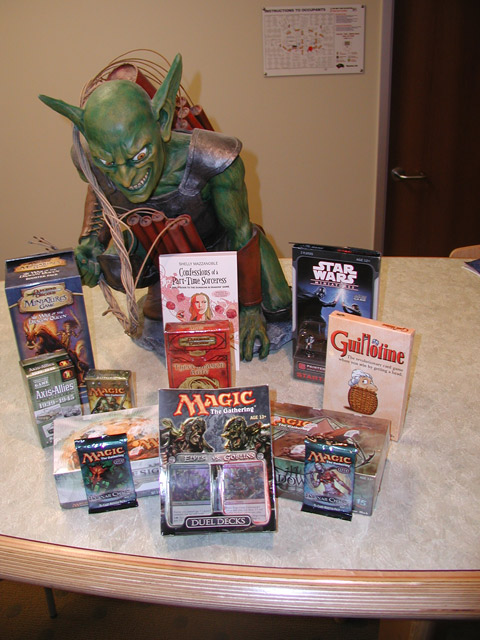 Not too bad for a pre-day's work!

After three days of travel from my native Iowa to the west coast I was pretty exhausted. Fortunately, the Wizards of the Coast corporate offices aren't without forms of nourishment for the low employee price of just $0.25. 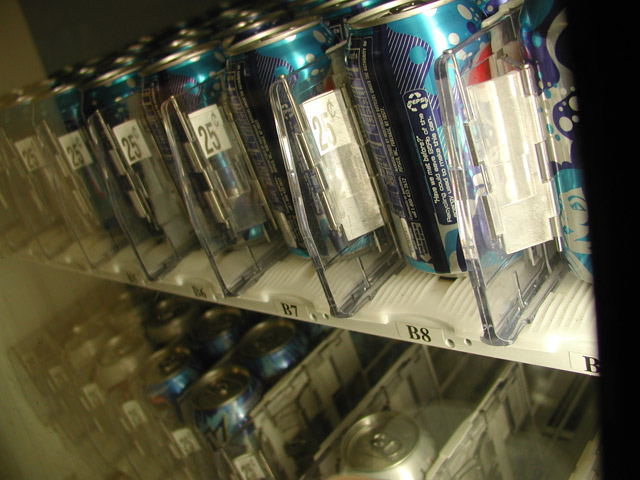 Exactly what an intern needs for those late night R&D drafts.

That wasn't all, I quickly found out. If I ever get bored with playing just Magic (as if)? As a new employee of Wizards of the Coast, I am also eligible to take advantage of the video game lounge, library, and game systems. Talk about awesome. 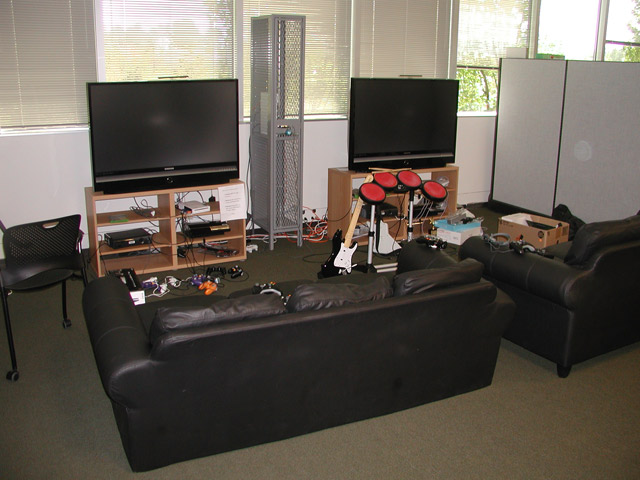 I wonder if being here counts as 'working.'

Awesome free stuff before you've even done a lick of work and super-cheap soda? This job is going to rock.

While I quickly learned that there are a whole lot of fun aspects to working as an intern for Wizards that you don't get in most 9-5s, it's not all fun and games. Well, it is actually all games, and it's almost always fun. I guess what I'm trying to say is that we actually have to work too. As a member of the Magic web team, I get to work first-hand on projects like this very website. I never would have guessed just reading at home how much effort goes in to creating the Cards of the Day and Magic Arcana. And editing each writer's article? It takes more than a little time to polish up the pieces writers send in, adding links, autocarding, and creating / inserting graphics to produce the well-oiled works you see Monday through Friday. To put it mildly, editor Kelly Digges doesn't get enough credit.

As fun as all of those things are, having the members of Magic R&D just a few cubicles over from yours may top everything. Take this conversation from my third day on the job with Magic Developer (and former Pro Tour superstar) Mike Turian.

Mike: Hey Bill, how's the internship going?
Me: Really good, Mike. Greg [Collins] has me working on some web editing stuff, and I have an assignment for Scott [Johns, editor in chief of magicthegathering.com] due later today.
Mike: That sounds like fun. [pause] Soooo...wanna do a "Rock" / "Paper" / "Scissors" draft?
Me: Yobv.

Did I mention as an intern you get to see all the cards from the sets in development that haven't been released yet? 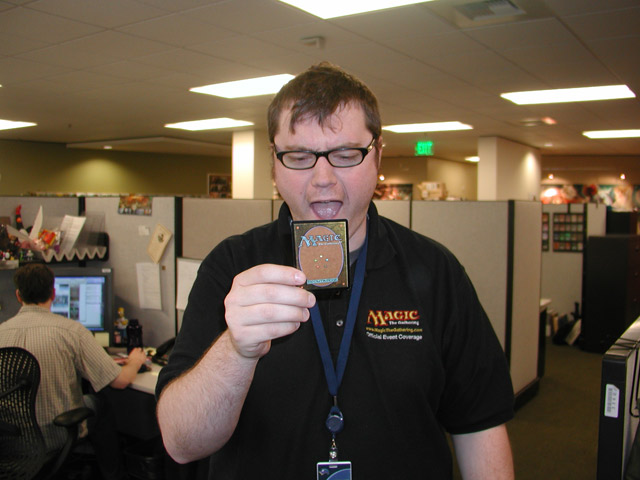 Not only do you get to see the cards that will reshape Magic: The Gathering in the months to come, but you actually get to play them against some of the world's best players. Just a seat or two away from my desk sits my boss Scott Johns, a former Pro Tour champion and the first player to Top 8 three Pro Tours in a row (the first three he played in!). Downstairs from us sits Randy Buehler, Pro Tour champion and webcast commentator, and over in R&D there's the aforementioned Mike Turian, Erik Lauer, and Aaron Forsythe. Suffice to say over the course of six months an intern can expect to get an education not just in game design but in how to play games better as well.

What's that? Curious as to what the office environment of Wizards actually looks like? See for yourselves. 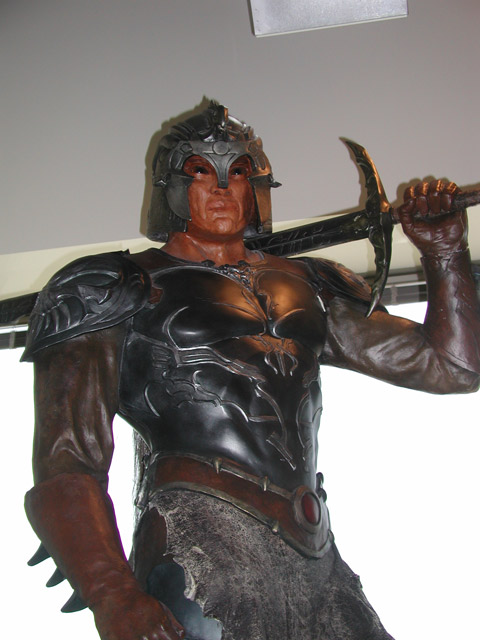 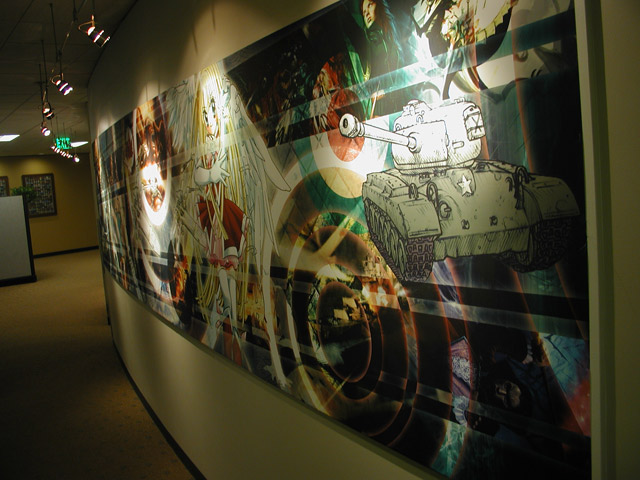 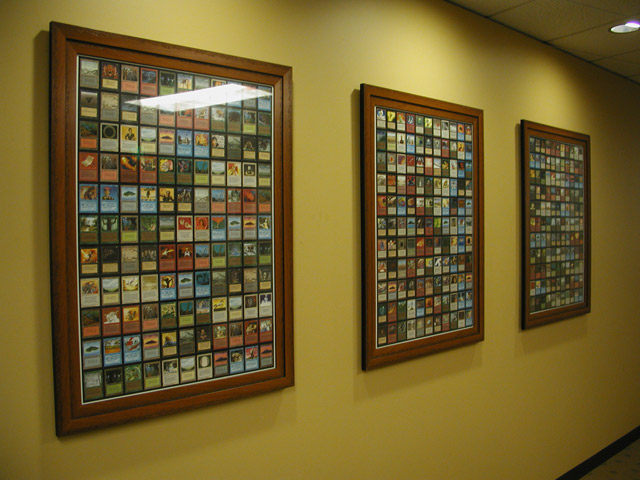 Quite possibly Magic's holy grail: an uncut set of Beta. 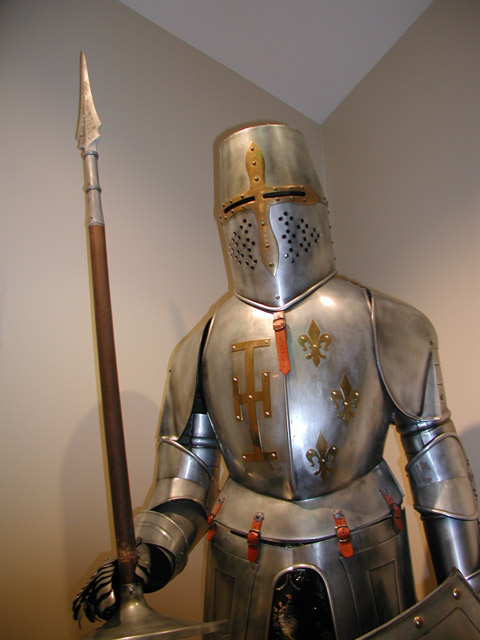 I've been told this is who I have to report to when I mess up. 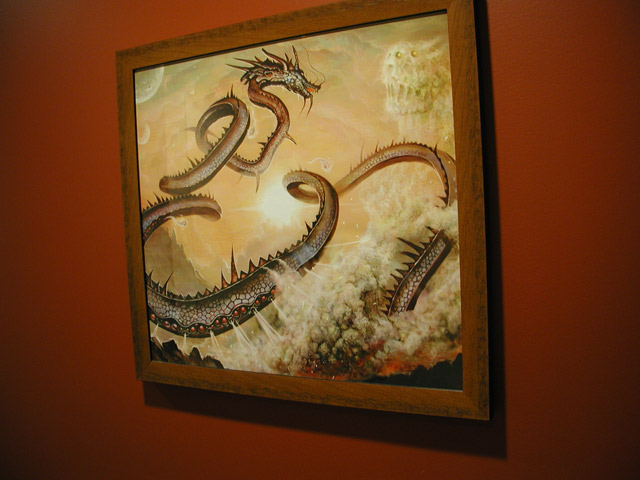 That doesn't just look like Kokusho, it IS Kokusho: the original art by Tsutomu Kawade. 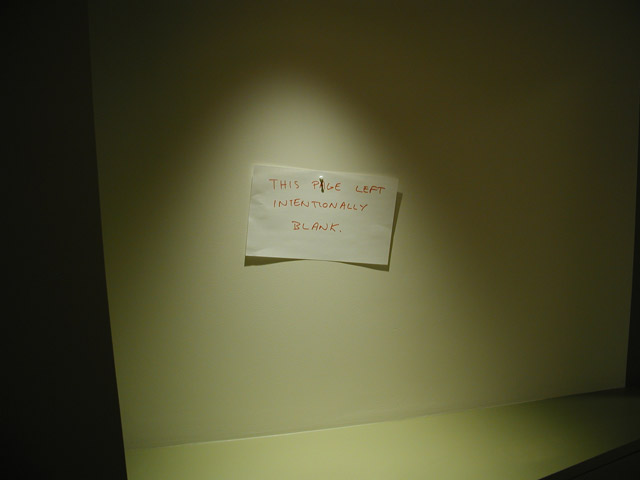 Of course, not every space is occupied by something awesome.

It's always an enjoyable thing to work with like-minded individuals if for no other reason than that you have lots to talk about during lunch. Any worries I had that gaming would be the only common ground shared with my coworkers evaporated within the first few days. This was a result of any number of conversations which included:

Then there was the weekly Magic meeting, held every Tuesday. Each week, all the people involved with making Magic: The Gathering get together to discuss the state of the game. If ever there was a doubt in my mind that the people responsible for Magic are undyingly passionate about what they do they were erased after participating in my first such meeting. Topics from tiny to titanic were discussed in detail, with everyone voicing their talented opinions. While not everyone agreed with each other on everything, one thing was very clear: everyone in the room was deeply passionate about making sure the best things happen to a game they all share a common love for.

Being an intern at Wizards isn't completely perfect, however. You do have to give up DCI sanctioned events, meaning no Regionals, FNMs, PTQs, GPs, or PTs. I'm a longtime tournament player, and a part of me definitely misses those events, but I can rest happy knowing that I get to play Magic daily as part of my job description as well as joining weekly staff drafts and other events (did you know Wizards of the Coast has an internal Prerelease just like the ones in the "real" world?).

MountainAnd there was the drive to Seattle. From my home in Iowa City, Iowa it took nearly thirty hours to drive all the way out to Washington through South Dakota, Wyoming, Idaho, and Montana. In an effort to karmically balance out my good fortune for receiving my new job the universe saw fit to dump rain on me for most of the ride. Also, as a long time Midwesterner used to a world with ground that is flat, flat, flat, I have to admit it was a bit unnerving driving through terrain that kept getting higher and higher until I was finally driving up and down actual mountains. And driving to work with an oceanfront view every day? That's going to take some getting used to.

Finally there was the hazing. Okay, more accurately there was the lack of hazing, but to any future interns out there I will offer you up this advice: if Rosewater tells you to find the box of purple cards and sort them alphabetically, don't. There aren't actually any purple cards. Well, at least not until "Scissors."

On top of all the awesome tasks I get to pitch in with every day at the office, I get to continue doing one of my fondest non-playing Magic activities. That's right, in addition to working with games all day I still get to fly all over the world to help with event coverage. That means you'll be seeing my smiling face at the upcoming Pro Tour–Hollywood (May 23-25), U.S. Nationals (August 1-3), and Grand Prix–Buenos Aires (June 28-29), amongst others. Nothing makes you want to play competitive Magic more than watching some of the best in the world do it at the highest level, and I'm excited that I get to be there to catch all the action and record it for posterity, even if I don't get to play. Plus did I mention all the cool places I get to go to this summer?

I would have to say working at Wizards of the Coast isn't exactly like I imagined it all those years ago in Mrs. Lyon's class. Somehow it's even better. Working with the brightest minds in the gaming world on one of the most successful games the world has ever known is exciting in a way that's difficult to convey just using words. Waking up before my alarm because I'm just too excited to sleep in anticipation of going to work was a new experience, and it does take some getting used to. And when things feel too busy and you DO feel a bit down? There's always staring at those big sheets of Beta cards to perk your spirits right back up. All that, and it's only the first week!

Somehow I think it's going to be a good six months. 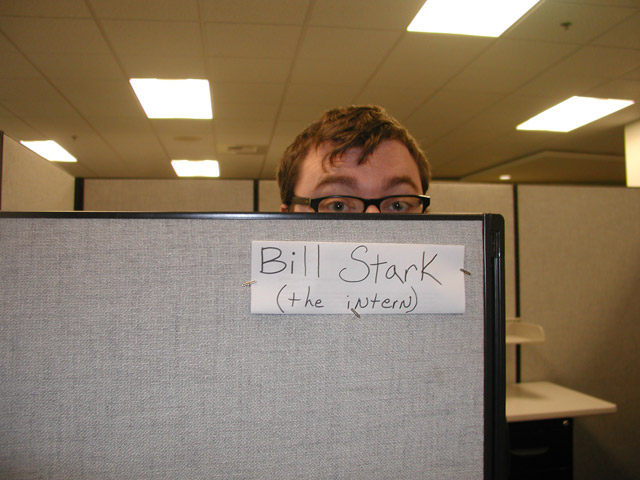