My Only Friend, The End (of Turn) 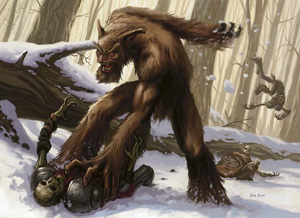 a Single White Green Mage. I like long walks through the Forest and dinner by firefly light. I enjoy stimulating conversation with trees. If you have pointy ears and put

into my mana pool, then I probably think you're awesome. I like to search my library for land cards and tap out for fatties, sometimes at the same time. I only have one speed: Sorcery. My favourite Phase is the Main Phase. I'm just assuming by the name that it's the most important Phase.

Apparently, I was mistaken. Welcome to End of Turn Week, or, as the kids are calling it, EOTW! As a self-proclaimed unrepentant Green mage, I didn't even know what the End of Turn was until Ted explained it to me. What kind of crazy wackiness occurs at the end of turn? Keep reading and you'll find out!

Do as the cat men do

A couple of weeks ago, I advised Standard Tribal Wars lovers that I would be taking a look at what Coldsnap brings to the format. Well today, I'm going to make good on that promise. Happily, Coldsnap makes a number of important contributions. Some tribes that were not-quite-legal get their much-needed fifth member (Faeries, for example). Other tribes, meanwhile, get their much-needed second-through-fifth members. Karplusan Yeti is no longer lonely, since it's been joined by four other abominable snowmen and snowwomen (Ohran Yeti, Stalking Yeti, Karplusan Strider, and the mutated Drelnoch).

Besides just adding warm bodies to fill out some tribal rosters, another important thing that Coldsnap did to help out some tribes was to add a creature of a particular colour. Some of the smaller tribes were hurt by the fact that they had one rogue member who insisted on being a different colour than the rest of the team. The most notorious of these mana-base ruiners was the Avatar Tribe's Scion of the Wild. Everyone else was Black or Red, but you had to go and be double-Green. Shame on you! Luckily, Coldsnap's Herald of Leshrac heralded a new two-colour reality for Avatars, and it was good.

Another such tribe is the Cat tribe. Pre-Coldsnap, if you wanted to play with Cats, you'd need several balls of yarn and mana of at least three colours. There were three White Cats (Savannah Lions, Leonin Skyhunter, and Skyhunter Prowler), one Green Cat (King Cheetah), one Blue and White Cat (Pride of the Clouds), and one Red Cat (Sabertooth Alley Cat). There was no good two-colour configuration and if you went to three colours you'd be playing something less-than-exciting.

Not only is the newest Cat hep to the jive, but it also allows you to build a nice two-colour, G/W deck with a serious late-game threat. The cumulative upkeep is very manageable, since all of your other creatures are so inexpensive. The Nishoba joins the jobless (Savannah Lions and King Cheetah) and the gainfully employed (Leonin Skyhunter and Skyhunter Prowler), to form a sort of giant robot made of cats. I'm not sure what you'd call the robot, but it's such a great idea, I'm surprised nobody's thought of it yet.

The Skyhunters are great for the deck and for the Leonin military, because not only do they save on showers (the knights bathe themselves), they also require very little supervision. With ample food and water, you can leave them home alone for days on end. Somehow, the pair still manages to get a lot done despite sleeping twenty hours a day. King Cheetah, meanwhile, is the whole reason I'm featuring this deck during End of Turn Week. You can play him at instant speed, which means you can pop him out whenever you please. This will be at the end of a turn! Congregation at Dawn is another nifty EOT play, and Vitu-Ghazi, the City-Tree allows you to pump out creatures at EOT, too. That's three fun things you can do at the End of Turn!

2 Glare of Subdual 2 Congregation at Dawn

For a while, I was using Ronin Warclub to complement the four Cloaks in the creature-pumping department. The Warclub is pretty neat with creatures that can be played at instant speed (see Fig. 1.3: Ninjas), and I was unnaturally fond of the idea of playing King Cheetah in the middle of combat, or, gasp, at end of turn. Surprise! Ronin Warclub gets even better in multiples, especially with your evasive creatures. One of the problems, though, was that they often interfered with Vitu-Ghazi, the City-Tree. If I was beating down with a Warclubbed Skyhunter Prowler, I couldn't make tokens at end of turn without the Saprolings stealing the Warclub. This wasn't that big of a problem, admittedly, but the deck had some weaknesses that needed to be shored up, so I replaced them with Glare of Subdual and Congregation at Dawn.

When they're not taking over Earth in a post-apocalyptic future or throwing barrels at a poor Italian guy, Apes can be found patrolling the treetops in John Avon's 9th Edition Forests. As with Cats, four of Standard's Apes reside in the Core Set. Among the furry-ous four, you've got your Gruul-loving Kird Apes, your Spider-esque Tree Monkeys, your self-indulgent, yet fun and exciting Zodiac Monkeys, and, of course, your venerable Ancient Silverbacks. The paws of the latter, I'm told, sell for a ton on the black market. Don't worry, though, the Silverbacks can regenerate.

I believe it was Sartre who said, “Four Apes don't make a tribe,” which is why I was pleased to see that Coldsnap brought with it a fifth Ape, the pugilistic primate, Simian Brawler. If you look closely, you will see that the Brawler is holding a splintered chunk of a barrel, just like his videogame cousin. The other key thing to note is that Simian Brawler has a Wild Mongrel-esque activated ability. How long does each +1/+1 last? If you said, “Until end of turn,” you are right!

The non-Ape cards are the usual array of creature removal and creature enhancement. After playing against a Snow-heavy U/R Wizard deck, I realized that Skred is a beating. It's as cheap as spot-removal gets and it becomes much more powerful over time, something that isn't true of, say, Last Gasp or Pyroclasm. The only concession you have to make to accommodate the spell is to add Snow lands to your mana-base, which really isn't too big a deal.

I'm pretty sure that any Green (or partially Green) tribe based on smallish creatures wants to play Moldervine Cloak. Wurms, for example, are already big enough that they don't really need the power boost, but Apes and Cats and Elves can certainly use it.

Despite the fact that Snakes and Apes are natural enemies (seriously, it was in a book), I included a set of Ohran Vipers. They count as a Snow permanent to power up your Skreds, they draw you cards (not an easy thing in R/G), and no one wants to block it because of its Basilisk-ability. Moldervine Cloak will make blocking a necessity, however, and Skarrg, the Rage Pits will often turn an opponent's chumpblocking into a win-win for you. The other non-Ape creature is the utilitarian Indrik Stomphowler. Its stomping and howling makes it fit right in with its simian teammates, and its comes-into-play ability will almost always have a target. Some of the more relevant ones include Ghostly Prison, Faith's Fetters, and Glare of Subdual. Savage Twister rounds out the deck because sometimes you'll absolutely, positively have to kill every creature in the room. Accept no substitutes!

As I said, Coldsnap not only makes some tribes legal (as in, gives them their fifth member) and not only does it help ease the mana woes of some of the smaller tribes, but it also opens up new possibilities for older, more established tribes. When you think of, say, Elementals, you probably think of Green or Red, since that's where the most powerful Elementals usually reside. I'm talking about Rumbling Slum, Verdant Force, Force of Nature, and, of course, Molten Sentry. I actually built such a deck, which featured Elemental Resonance to score major flavour points (it's not bad with Bramble Elemental, either). I believe I scored twenty-two flavour points before losing every game I played with the deck. Instead of building an R/G deck, I've decided to do something a little different.

After Dissension added three Blue and/or White Elementals to the tribe (Windreaver, Celestial Ancient, and Pride of the Clouds), you could actually build a U/W Elemental deck. The problem was that you'd have to use Tidewater Minion, along with the three from Dissension and 9th Edition's Air Elemental. I have nothing against the Minion, and I can certainly envision a deck with him in it, probably featuring the old Freed from the Real + Tidewater Minion + Azorius Chancery combo to generate infinite mana. If you had a Celestial Ancient and a Cage of Hands kicking around, you could use the mana to play and the replay the Cage as many times as you liked which would make all of your Elementals very large. Windreaver also provides a nice mana-sink. But I'd rather not go down that road again, if only because infinite-anything combos aren't terribly fun to playtest on Magic Online and this one seems particularly easy to disrupt. 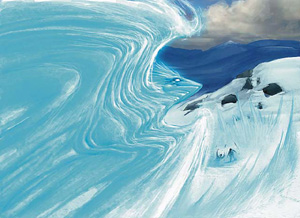 Coldsnap provides a suitable replacement, the Littlest Elemental, Squall Drifter. Unable to find work as a 4/4 flyer, the Drifter took a minimum wage position as a Master Decoy. While a Decoy's work is done mostly during the Beginning of Combat Step before attackers are declared, the survey says that the second busiest time for a Decoy is during the End of Turn step! What a coincidence, this being End of Turn Week and all.

Pride of the Clouds loves other flyers, so it's nice that all of the Elementals I'm going to use have flying built right in. The other creature that I chose to use is Jotun Owl Keeper. As a 3/3 for three, it's not a bad creature on his own, and when he hits the bin, he releases all of his pent-up frustration in the form of 1/1 Birds. That's his death wail, his ‘owl of anguish, as it were. All these Birds help to pump up Pride of the Clouds, and make Celestial Ancient's counter-generating ability even more powerful (more creatures equals higher net pump).

The rest of the deck is made up of creature removal spells and a little extra mana. Cage of Hands and Faith's Fetters neutralize threats and have excellent synergy with Celestial Ancient. Wrath of God used to be Ghostly Prison, but I lost to a number of decks that didn't really care about attacking (like Shaman-Ball with Sachi, Daughter of Seshiro powering up huge Demonfires), so I made the switch.

Besides tapping a creature, what else can you do at End of Turn? Draw cards with Mikokoro, Center of the Sea! The End of Turn fun just never, uh, ends.

4 Pride of the Clouds 4 Windreaver

Until next time, have some serious fun until end of turn!