I first began writing for MagicTheGathering.com back in January, Mark and Aaron sent me an email detailing the first few columns we’d be producing. They all centered on Torment previews, and therefore the color black. My first assignment centered around Ichorid and cards with the tombstone symbol, followed by Faceless Butcher and other cards which temporarily removed other cards from the game, an examination of the top five black sets of all time, and a look at Basking Rootwalla and other discard hosers.

Finally given free choice over subject matter, I decided to dedicate each of the next few weeks to exploring a facet of each color in Magic. I dove into blue creature types, anti-white hosers, and one mana cost direct damage spells.

And then there was the infamous green column.

Even though I’d qualify that Zoo column as an unqualified disaster, my head was in the right place. When people think of green, they think fatties. They imagine big hulking monstrosities roaring across the forests to smash in your face. Maybe they envision elves protecting the woods, aided by ancient Treefolk and ferocious woodland animals. Either way, green is the color of nature.

Today I’ll be taking a look at the top five green expansions of all time. As with my black set ranking, I’d like to establish a few ground rules before I delve into the cards.

Let’s get down to business, shall we? 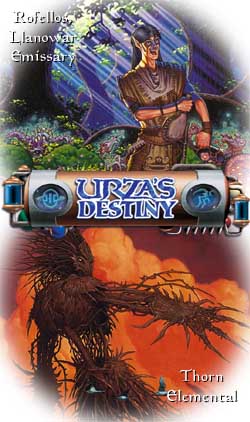 Why is it number five?: Narrowly edging out Urza’s Legacy, Urza’s Destiny offers up a cornucopia of green creatures and spells. While the cards in this set weren’t environmentally defining cards such as Survival of the Fittest or Oath of Druids from Exodus (which also finishes outside the top five), they filled a ton of different needs for green mages everywhere. From mana acceleration to mana denial and all points in between, Urza’s Destiny is your set.

Why is it number four?: There’s a reason nobody plays green in Type 1: All of the old green cards rank somewhere in usefulness between Lance and Reflexes. Sure, you might get an occasional Sylvan Library (to use in your blue deck) or Birds of Paradise (to use in your blue deck) or Kird Ape (wait, that’s not green). Never mind. Visions marks the point where green started getting multiple tournament-worthy cards per set.

Why is it number three?: Urza’s Saga plays like a greatest hits collection for green’s one and two drop slots. Shall we take a peek?

4 Horn of Greed 3 Call of the Herd 2 Intuition 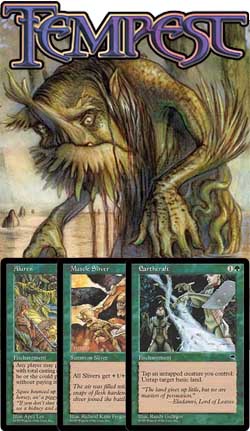 Why is it number two?: Verdant Force. The best Giant Growth ever. The best mana diversifiers. Not one, but two engine cards. What more could you want from a green set?

Why is it number one?: Did you see the list right above? Twenty-three constructed-worthy cards for green in one set! Some people cry that green has gotten the shaft, that green isn’t powerful enough, and that green hasn’t gotten any good cards.

Cry me a river, because green has been steadily getting the goods ever since Jamie Wakefield made a federal case out of the weakness of green. Odyssey marks the first time that green got the most good cards in one base set.

Next week: The winner of the Create-Your-Own-Column contest.

Ben may be reached at bleiweiss1@cox.net.