For one thing, Magic Online avatars show damage, so they normally wear away to a skeleton as the owner loses life points. But how do you do that with a skull? The decision was finally to show the skull itself wearing away: 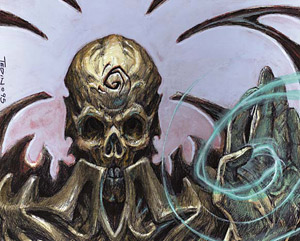 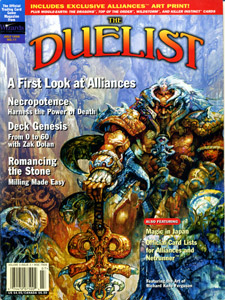 But that wasn't the end of the problems. Necropotence is just a skull, which raises the question: What does the rest of it look like? Does it even have feet?

Luckily, that question was asked before, back in July 1996, for a feature article in The Duelist Number 11. Rob Hahn wrote an article about the omnipresent Necro deck, and Mark Tedin was commissioned to expand on his original vision, giving us our first look at the freestanding Necropotence: 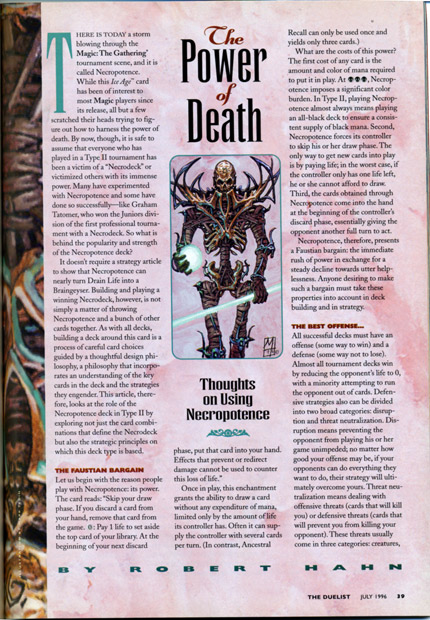 And sure enough, the avatar designers were able to use that image in their work. Take a look at the full-length Necropotence avatar in all its bony glory. 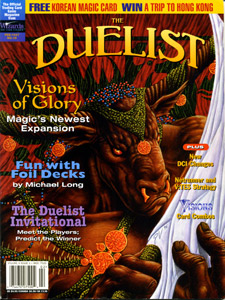 Ah, but it doesn't look exactly the same. What's up with that? Well, a few months later, in February 1997 (Duelist #15), another article about Necro decks showed up. This one, by Mike Long, talked about creating decks to specifically attack the weak points in popular decks. And at the time, there was no more popular deck than Necro.

More importantly for our purposes, the art direction of The Duelist had changed, and feature articles were now getting an entire page of newly commissioned art. So Mark Tedin came back and provided this action shot:

Note that this doesn't just show Necropotence. It's fighting a white-faced Pierrot clown on a see-saw while a wolfman looks on... that's right! In keeping with the theme of Long's article, it actually shows Necropotence in a pitched battle against Stasis! There's even a crescent moon in the background!