fooling around this time. I'm all serious this week. Puts on serious face. See? Serious. 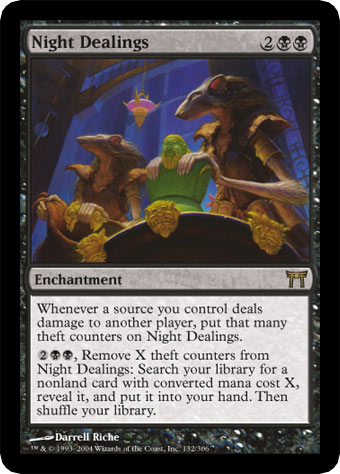 So we have some repeatable tutoring action. My first thought was that Night Dealings reminds me of Planar Portal. It's cheaper, but it's more color-intensive, and it has a whole sadistic damage thing going on. My second thought was that Night Dealings reminds me of Talon of Pain. It's a 4-mana permanent that accumulates damage-based counters, then cashes those counters in. So the logline for Night Dealings is that it's Planar Portal meets Talon of Pain. The logline for my card last week, Gifts Ungiven, was that it's Fact or Fiction meets Intuition. My logline for Magic in general is that it's Lord of the Rings meets poker—or it would be if the Lord of the Rings TCG wasn't produced by a different company. But back to Night Dealings. Note a huge difference that I only picked up the eighty-fifth time I read the card: Talon of Pain gets a single counter each time you deal damage no matter how much damage you deal (Lightning Blast = 1 counter); Night Dealings gets counters equal to the damage you deal (Lightning Blast = 4 counters). That's a bit more interesting.

You could do this in the daytime, but it loses a lot of the atmosphere. Black has a number of leechlike cards that slowly chip away at players' life totals. In combination with Night Dealings, you'll want to use the ones that deal damage (like Warp Artifact), not the ones that cause life loss (like Relic Bane). Adding automatic theft counters each turn seems like a fine plan, and you can spend them to tutor for more such cards: Cursed Land, Festering Evil, Leeching Licid, Parasitic Bond, Urborg Stalker. More damage equals more theft counters. Oh yeah, more damage can also win the game.

Is Warp Artifact too slow for you? Try Hecatomb instead. One of my all-time favorite nearly unplayable cards, Hecatomb gives black the ability to deal mass amounts of damage, which can then help you tutor for either many cheap cards or a few expensive cards. It does set up a quandary for you, though: Do you use your Swamps for mana (activating Night Dealings isn't cheap) or for pain? If mass sacrifice isn't your thing, you could go with Pestilence, Last Laugh, or Thrashing Wumpus for similar effects.

No big whoop, just some harmless hassling. It's all in fun. Back during Red Week, I mentioned just a few of the plethora of red enchantments that all basically say “Do what I tell you or I'll punch you in the face. And maybe I'll punch you in the face anyways.” You know, Pyrostatic Pillar, Sulfuric Vortex, Manabarbs, Spellshock, Impatience, Rivalry, Antagonism, etc. All good with Night Dealings. Ankh of Mishra—which is not an emblem symbolizing life—can get thrown into this category too. Especially good with the tutoriffic enchantment is the aforementioned Talon of Pain, which totally lets you leverage your synergies to the max, dude. One damage source equals a counter on the Talon and some counters on the Dealings. Then you can use the Talon for either board control or more direct-to-the-noggin damage (essentially transferring its counters over to Night Dealings). If the damage source is a creature with a “whenever this deals [combat] damage [to a player]” ability, you're synergizing your synergies to a supersynergistic degree.

And out come the pingers. Embermage Goblin (with his friends the other Embermage Goblins) can stack a ton of counters on the Dealings and/or the Talon. If you've got the pair working, Goblin Cannon and Triskelion are fine repetitive damage sources. Lightning Rift + Night Dealings can keep you stocked full of cycling cards, Night Dealings can make up for the draws you miss with Words of War, and Dealings + Talon + Ion Storm starts to get very, very bloody.

When you use Night Dealings to search for Blaze, you only have to spend one theft counter. When calculating the converted mana cost of an X spell in your deck, X is equal to 0. Then you can Blaze your opponent for 3 and get three more theft counters. Which you can spend to get three more Blazes! (Assuming you have

What could be more wholesome than arson? Try to follow this logic: Toss a cheap burn spell at your opponent. Tutor for a cheap burn spell. Repeat. With enough 1-mana bolt variants in your deck, Night Dealings becomes an enchantment that says “

I used to live in New York City, where it's mandatory that you take either a self-defense class or a mugging class. As long as competitive balance is maintained, the city is happy. Night Dealings + Reckless Assault is a tantalizing, purse-grabbing combo… if you've got 4 tutorable Life Bursts stashed away in your deck. Three Life Bursts = +24 life. All four = +40 life. Studies have shown that muggers do have exceptionally long lifespans.

Sneaking Around in the Dark

Magic has a word that describes the broadest category of repeatable damage sources: “creatures.” Many of them are sneaky, stealthy, snealthy critters that lurk in the shadows, steal behind enemy lines, and give you wet willies. (If any of you don't know what a wet willie is, please take this moment to step away from your computer, find your older brother, and ask him. He'll be glad to help.) Creatures with some sort of evasion ability can stack up the counters on your Dealings and/or Talon. Creatures with some sort of evasion ability that have a damage trigger are even better, and that's why Shadowmage Infiltrator and Scalpelexis make the next deck. If your creature lacks a damage trigger, give it one with Sigil of Sleep (another nighttime activity: Sleep!) or Curiosity (another nighttime activity: Being a Peeping Tom!) If you creature lacks evasion, Sleeper's Robe (more Sleep!) will help, and it'll throw a damage trigger (hey, kids: Burglary!) on there for good measure. Note how cheap these creature enchantments are so you can easily dig them up with Night Dealings—and play them the same turn you find them.

3 Talisman of Dominance 3 Talon of Pain

It's well documented that I'm a genius. I know it, you know it, and I know it. I feel I can safely say without exaggeration or hyperbole that this next combo is the most astoundingly brilliant combo ever discovered in the history of Magic: Night Dealings + Deadapult. Yes! Deadapult! It finally comes into its own. A toolbox Zombie deck, a way to turn Zombies into direct damage (when they're not attacking), and a way to tutor up exactly the Zombie—or Lord—you need. Running out of Zombies? Pop out Mr. of the Undead and recycle your dead… um, deader… Zombies.

A Deck with Deadapult in It

2 Talisman of Indulgence 2 Talon of Pain

I hope everyone has fun at the Champions of Kamigawa Prerelease this weekend. I'll be gunslinging at the Seattle event on Saturday. If you're not planning to go because you're a diehard casual player or because you find the tournament scene intimidating, trust me—Prereleases are too fun to miss, and they're pretty darn casual for a tournament where they keep track of, y'know, wins and losses and stuff. This is the sanctioned event that pulls the casual players out of the woodwork, so you'll be in good company. Of course, if you don't go, there might be… unpleasantness…

Until next week, have fun at the Prerelease!
Mark