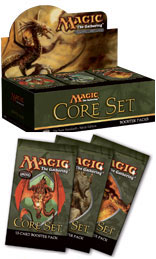 This weekend players all over the world will be attending release events. Release events are a way to premiere a new set at your favorite retailer's local store. Wizards of the Coast is giving away unique gifts for gamers, and you'll be some of the first to get your hands on the Core Set that will be reshaping the way players think about Core Sets.

If you haven't seen Mark Gottlieb's article about some of the changes that Ninth Edition introduces, especially the adjustment in local enchantments (now called Auras), check out yesterday's Latest Developments. You can also find helpful information in the Ninth Edition FAQ.

An Itsy Bitsy More on Spiders

As MarGo mentioned in his article, Spiders (really all "may block" / "may be blocked" cards) got a facelift. Was it really that much of a change? No, it actually restores some of the wording that was used from Giant Spider in Alpha until Plated Spider in Urza's Destiny. "Can" has been reinstated because "may" is often used with optional abilities, and the spider ability is describing what is able to be done, not what might or might not be done.

Another reason is the adjustment helps to more clearly define attacking and blocking restrictions. "May block as though it had flying" plus "can’t be blocked except by creatures with flying" tends to take a while to understand. Putting both into simple can and can't terms makes it easier to decipher which blocking assignments are and aren’t legal. After all, one of Magic's Golden Rules [CR 103] is that "can't" beats out "can."

This does add a new twist to Masako the Humorless. With Masako in play, your tapped as well as your untapped creatures will be forced to block a creature with Lure attached to it that's attacking you. On to the inquiries…

That's it for this week. Next week we'll have more questions, and then it's off to Baltimore, Maryland, for the US National Championships for questions from Pro Tour players, Regionals winners, and the Junior Super Series.