No, Mr. Beleren, I Expect You to Die

can see in your eyes that you thought you had me, with your silly sneaking around and your pathetic "teamwork." But now who's dangling from ropes over shark-infested magma? Certainly not me! Tragic, really, that you failed so completely. At least I can give you a few moments to bask in my genius before you drop to your death, to see the beautiful elegance of my master plan as it began in my mind and now ends—with your doom. 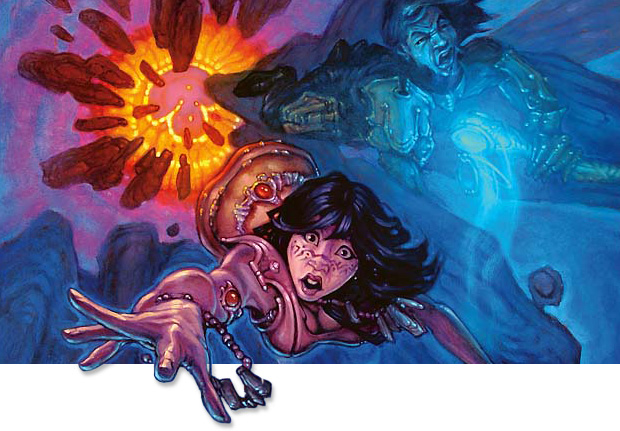 Don't despair—though Archenemy is here and the Multiverse is likely doomed, you too can enjoy the pleasure of crushing many friends under your heel when you wield the power of the scheme cards alongside your deck. If you haven't heard about this amazing new multiplayer product, check out the product page here and the rules introduction here. I'm going to dive in and tell you how an evil algorithm graduated to become the seed for the evil master plans of a few good designers. Well, we started good, but we were soon turned to the dark side by the schemes' promises of delicious destruction.

Introductions are in Order

On your way to my inner sanctum, I'm sure you became curious about the terrifying variety of the monsters and automata in this lair. You see, good minions are few and far between these days—the economy, you know. So, I was forced to ally myself with a number of other villains, to develop the technology we would use to take over the world. I will admit, I was a little ... uneasy, working with like-minded, backstabbing individuals, in a (shudder) team atmosphere. But soon, once I pinpointed their secret weaknesses and the work had begun, I knew I would have the edge against their inevitable but predictable betrayals. 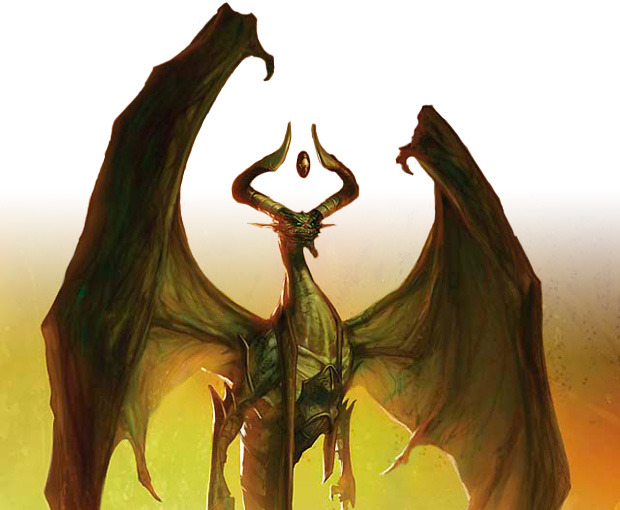 As a product, Archenemy began its life as a wacky hybrid between a Duel Decks and a solitaire-style multiplayer idea. Mons Johnson, champion of goblins everywhere and all-around amazing designer for Magic, Duel Masters, and Axis & Allies, did initial work on this "Nicol Bolas deck," as we fondly called it, a blue-black-red 100 card singleton concoction that played (in at least one incarnation) as follows:

Over time, Mons made some of his own new cards to fill gaps in the Bolas deck—simple, untargeted mass removal, and some "random choice" cards. I participated in a few of the playtests using the Bolas deck, and one curious feature kept emerging: We wanted to get angry and smash Mons, who generally ran the deck, while he giggled with glee at our misfortunes. It was less about the wacky algorithm of the deck, and more about us vs. Mons, the archvillain. That core principle, along with the nascent new cards that would become the basis for schemes, guided the creation of Archenemy proper.

Our team consisted of the following roguish gentlemen:

Ken's a designer for Magic and Duel Masters, and recently came off leading the design for Worldwake. Ken probably has more multiplayer experience than the other full-time members of R&D combined, so he was tapped to lead the product. Ken always kept his eye on the big picture, and kept pushing the team to make splashier, poppier schemes.

Unsurprisingly, Mons played a crucial role in getting the team up to speed on what worked and what didn't within the Bolas deck. Mons also did a great job reminding us to keep things simple on the schemes—a few choice words can go a long way toward a fun experience without bogging everyone down in crazy rules.

Kelly's day job is as editor of the Magic website, but he also used to write Serious Fun, the site's casual-appeal / multiplayer column, and he's logged countless hours with crazy formats like Star, EDH and Respawn. Kelly's strength was identifying awesome moments in our play experience and hammering mercilessly on the rest of us to preserve those fun times.

I've got that sort of outsider, roguish view that can be really useful on a left-turn kind of product like Archenemy, and I brought it to bear in the creation of schemes. As I'll discuss below, I love throwing crazy stuff out there (almost as much as Ken!) and my unique mix of Spike-ish (Pro-Tour-type) and Timmy-ish (casual-smash-evening-of-Magic) qualities bolstered the team's vision and execution.

So now we had the team—on to the mission!

Your Fate is Thrice Sealed

Our plan wasn't always as perfect and flawless as this, you know. I remember those old times fondly—the smell of minions scorched by dragonfire, the constant bickering over who had "dibs" on the Cloneforge. It wasn't until we stumbled onto some of the more devious implications of the ancient magic that we knew we had a winner. 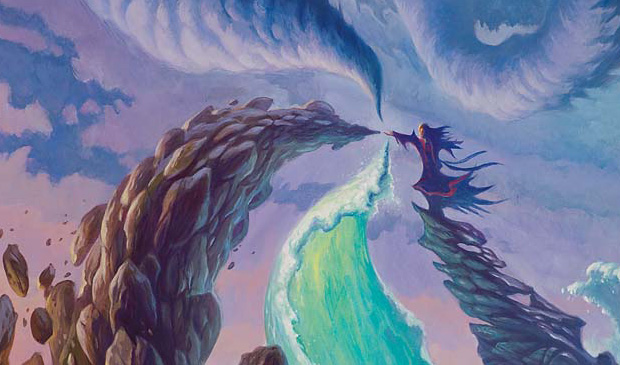 We started by designing schemes, without really nailing down how they would be played. Our plan was to just sit down and play with some random decks, and see what felt fun, and then zone in on those aspects of the product and amplify them. Our favorite mode of playtest was to plop down in the Magic R&D area—"the Pit"—and call out to any and all willing to listen that we were about to play Archenemy. Then members of R&D would approach and borrow one of Ken's many EDH decks, or would bring along an FFL Standard deck, and we would get down to it.

To illustrate how we "found the fun," here are three stories about schemes as they evolved:

When Ken asked the team to go forth and make schemes, I had a secret mission to make some absurd effects that would really evoke an epic feel. I thought one of my best efforts was also one of the simplest: Timetwister. I still remember seeing that card for the first time, just after I started playing in the days of Antiquities. It restarts the game? Whaaaaa? 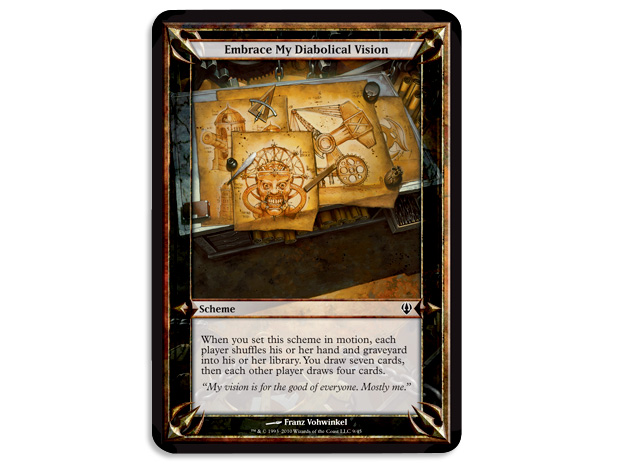 I brought the neo-Timetwister scheme card to one of our playtests. When I tried to use it, the other players groaning and wondering at how awful and asymmetrical it was bound to be, interrupted me. I stopped in the middle of reading it out loud, and realized—why just allow them to imagine the worst? Why not actually MAKE it worse? Hence, it became Timetwister for the archenemy ... and reduced hands of four for the archenemy's opponents! Bwahaha! (Always remember the evil laugh!)

Mons brought to our early playtests some examples of lasting scheme cards—he called them "shields." There were a few different types, but basically they came down to "planeswalker" style cards that had a damage threshold before they disappeared, and "out-clause" style cards that had a specific condition that would trigger their demise. 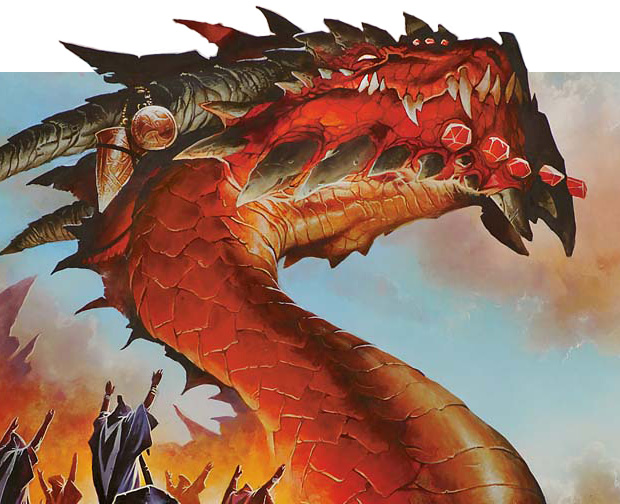 We played with the planeswalker-style cards that had a damage capacity, but found them fiddly and kind of annoying to manage along with the archenemy's life total AND any planeswalkers under Evil's control. Conversely, a lot of the out-clause-style cards had wacky trigger conditions and didn't flow with the rest of the abilities. We were losing hope at making the ongoing schemes work, which was depressing because we liked the feel of the villain's plans taking hold and strangling the heroes.

That is, until Kelly brought in a design that blew us away, affectionately called "Nice Cage."

The idea was simple: the archenemy puts one of the heroes in a cage, and that player's buddies need to break him or her free. It was a combination of pieces—freezing the player out from casting spells and using abilities and requiring the player's teammates to target them to get them out—that really clicked with the team, and it inspired us to make more cohesive "out-clause," ongoing schemes. "Nice Cage" didn't make it into the set, but its legacy lived on.

Late in design, we still felt something was wrong with some of the "universal downside for players" schemes. They were not quite pulling their weight in the funness-factor; they seemed like they were just filling space in the scheme decks. I believe it was Ken who struck upon the solution: why not make these all-downside schemes into a fun moment of despair, where one player had to sit in the "hot seat" and decide for the team? By having the archenemy pick an opponent, and have the opponent choose whether to have the bad thing happen to him or her ("self") or their teammates ("others"), a whole host of evil-laugh situations ensued. 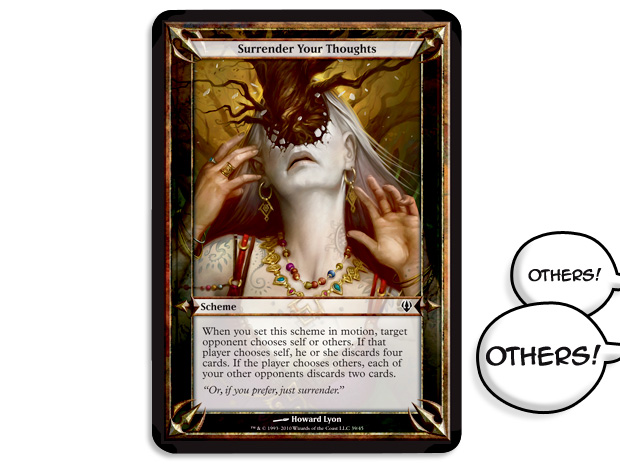 When we handed these "hot seat" schemes off to Development, it was love at first sight. I can still remember walking by one of the conference rooms and hearing Mike Turian, one of the developers on the Archenemy team, shout "Others! Others!" to sabotage his teammates. Tom LaPille, lead developer of Archenemy and villain (for that game!), merely grinned as he watched the heroes agonize at the betrayal.

The Pieces Are Coming Together

Yes, we had all the parts of our plan in alignment. Each of us had our different plans for domination—I was partial to ancient, village-toasting dragons, for example—and we soon parted ways. I was eager to show the world my schemes ... but oh ho, I'm getting ahead of myself. The best is yet to come! Stay right there ... well, dangle right there. I'll be right back and you'll be the first to witness the firepower of these fully WINGED and OPERATIONAL dragons! Mwahahaha! 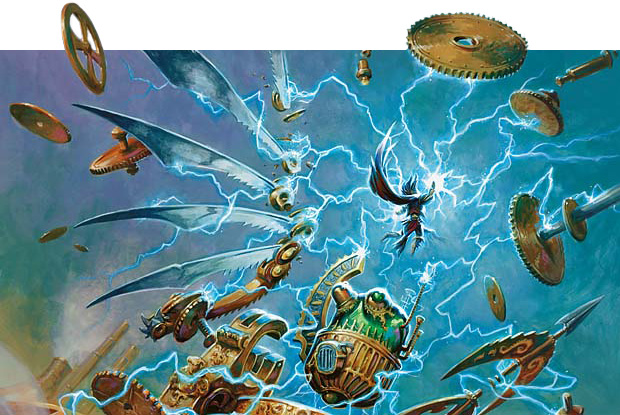 As much I want to claim credit for the elegant and delightful wickedness of the schemes for Archenemy, huge props go to the Creative team for their amazing take on the archvillain flavor. Both the names and the flavor texts of schemes have become favorites of R&D members to say maniacally, both in Archenemy games and in everyday conversation!

When Design handed the product off to Development, we were sure we had captured the feel of channeling massive power—as the Evil to be defeated. As Ken put it in his speech to us at the beginning of design, "We need to make sure the players can win ... but there should be danger." You'll feel it when you pick up Archenemy—even with a team of heroes, defeating the archenemy will be no easy feat!