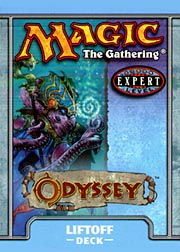 he Liftoff deck is for players who like to be in control. If you think you can outplay and outthink anyone who sits down across from you, this is the right deck for you. However, if you like ultra-aggressive games where you attack every turn until someone wins, you should probably trade Liftoff for another deck.

When the game begins, try to establish a strong defense while quickly reaching threshold. This deck excels at creature-based defense: the combination of Beloved Chaplain, Angelic Wall, Blessed Orator, and Hallowed Healer are very difficult for your opponent's forces to get through. As if that wasn't enough, Puppeteer, Nomad Decoy, and Kirtar's Desire keep opposing creatures from even entering combat. While you're busy frustrating your opponent, you can use Think Tank, Cephalid Looter, and Cephalid Broker to help you get seven cards into your graveyard. The two Cephalids are great because they allow you to put the card you really need into your hand while everything else goes to the graveyard. Millikin's ability lets you play your spells faster while its "drawback" only helps you reach threshold.

Once you get seven or more cards into your graveyard, this deck really shines. The Mystics all grow wings and turn into dynamite attackers. Meanwhile, your Healer and your Decoy become twice as effective! Once you get into a winning position, try to hold on to a Syncopate and leave enough mana to stop any game-breakers your opponent might come up with.

If you want to tune this deck, first decide whether you want to turn it into a pure control deck or a pure beatdown deck. If you want to go the counter route, replace some creatures with cards like Kirtar's Wrath or the Seventh Edition set's Wrath of God. Try to entice your opponent to put too many creatures into play, then wipe them all out. Follow up with some creatures you were saving in your hand, and cruise to victory. If beatdown is more your style, you'll want efficient white creatures like the Apocalypse card Spectral Lynx and the Seventh Edition card Longbow Archers. And, of course, it's hard to go wrong with Serra Angel. 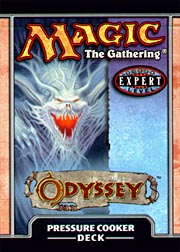 f burning your opponent to a fine crisp makes you squirm, this isn't the deck for you. But if you love fiery destruction and mayhem, read on. The Pressure Cooker deck is designed to keep the playing field clear and finish your opponent off with both creature assaults and direct damage. The deck plays a little like a red burn deck, and though it's a bit slower, it compensates by including some larger mid-game creatures.

Your plan is to hit your opponent with early creature damage. Then, later in the game, you can aim your direct damage cards like Morbid Hunger and Flame Burst at opposing creatures so yours can keep attacking - or you can aim them directly at your opponent's head.

Of course, it's important to use your creature removal spells wisely. If your opponent plays small creatures early on, you may want to wait and take a little pain until you can get out a Chainflinger to pick the little creatures off one by one. However, don't let your opponent keep mana-producing creatures or "symbiotes" for too long, since opposing decks can do nasty things if you let them reach threshold.

This deck does have a tough time dealing with big creatures. Its best creature-killing cards, Cabal Pit and Ghastly Demise, won't be very helpful early on because you need a lot of cards in your graveyard to use them. Try not to use up the flashback cards in your graveyard because several of your creatures and damage cards improve once you get to threshold. Also, don't be afraid to use the sacrifice abilities of Bog Wreckage, Ravaged Highlands, and Shadowblood Egg, even if you don't need the colored mana. They'll help you along to threshold, and the Egg will even get you a card.

If you change the deck, you'll probably want to add in a couple more Firebolts and another Flame Burst, and you should think about replacing a few of the more expensive creatures with wrecking balls like Kamahl, Pit Fighter or the Planeshift set's Phyrexian Scuta. You might also want more efficient removal spells, such as the Planeshift card Terminate, to replace the other black removal spells. After all, it wouldn't be a pressure cooker if it didn't make your opponent sweat. 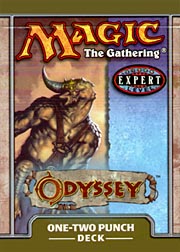 he One-Two Punch deck, like a heavyweight boxing match, is brutal and direct. Punch one: Put out more creatures than your opponent. Punch two: Blow up your opponent's smaller creatures, then attack. Flashback lets you play most of your spells twice, including some that put creatures into play, so you'll be able to amass a huge animal army.

Early on, you should fetch extra land with Deep Reconnaissance. After that, One-Two Punch is all about the combat step. This deck can put up to twenty-eight creatures on the table, and its support cards only make them more fearsome. Burn spells like Firebolt and Engulfing Flames clear out chump blockers. Sylvan Might pumps up a creature and gives it trample. You can make crushing surprise attacks by playing a creature, then using Reckless Charge to make it more powerful and give it haste so it can attack immediately. And Seize the Day lets you untap your biggest creature and attack with it again.

There are defensive combat tricks as well. Elephant Ambush and Beast Attack both put creatures into play at Instant speed. When your opponent makes an ill-advised attack, drop a fatty on the table and block. Green creature destruction! Moment's Peace can help you win the damage race by nullifying a counterattack, or it can save a creature in combat if you don't like how your opponent blocks.

It's worth repeating that all your flashback cards can be used twice. There are three Elephant Ambush cards in the deck, so you can play the spell six times. Remember, when you play a card with flashback from your graveyard, it's removed from the game. Empty your graveyard with a Gorilla Titan in play and you've got maximum deck efficiency... plus an 8/8 trampler.

The weak point of One-Two Punch is that it doesn't have many ways to destroy creatures besides slamming into them in combat. To improve the deck, take out cards that don't provide direct damage or creatures and put in cards that do. For example, Call of the Herd, the Invasion set's Ghitu Fire, and the Seventh Edition card Hurricane all pack a mean whallup. Your opponents won't know what hit 'em. 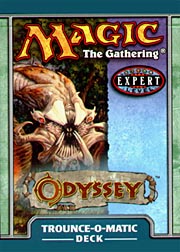 ntroducing the Trounce-O-Matic deck! It slices, it dices, it minces... your opponents. If you love win-win situations, this is your kind of deck. Its cheap creatures start out strong and only get stronger when you reach threshold.

Trounce-O-Matic has lots of ways to fill up your graveyard. Predict, Peek, Careful Study, and Diligent Farmhand area all early game spells that help you get cards in your graveyard without sacrificing card advantage. For example, Predict will immediately replace itself in your hand. Most of the time, you should target yourself with Predict and guess forest. That way, you'll put two cards into you graveyard and give yourself the best chance of drawing an extra card. And if you manage to drop Roar of the Wurm into your graveyard early, you can pay its

flashback cost to get a 6/6 fatty.

Your game plan should be to get a few quick creatures out, then use your blue spells to fill up your graveyard. Once you get to threshold, your beefed-up creatures should be able to punch through your opponent's defenses. If you're still stuck, use cards like Overrun, Deluge, Seton's Desire, and Stone-Tongue Basilisk to ensure that your horde can't be effectively blocked by your opponent's creatures.

Trounce-O-Matic has a defensive weakness against flying creatures. If your opponent starts flying over and attacking you, then you have to counterattack twice as hard on the ground. If you can get to threshold, then you should be able to win the race because your creatures are bigger than most creatures with flying. Another weakness of Trounce-O-Matic is that it has very few ways to kill creatures. Repel and Seton's Desire are as close as the deck comes to dealing with annoying creatures that your opponent plays. If you've lost board control because of the special abilities of your opponent's creatures, don't give up. Just wait for one of your game-breaking cards like Deluge and push through.

This deck could benefit from more threshold creatures and graveyard fillers. Krosan Beast or the Invasion set's Fact or Fiction would give your strategy a big boost, while Seventh Edition cards like Hurricane and Creeping Mold can shore up the deck's weaknesses. After some fine-tuning, you'll really be ready to puree the competition.