don't really know how to introduce this card but to say that it is a serious contender for strongest non-restricted, non-banned card ever printed: 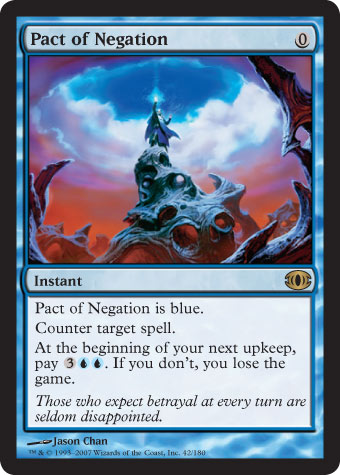 You're probably shaking your head. You probably understand that this card is no Dark Ritual, no Mana Vault, no Aether Vial, no... Actually, it kind of is. Dark Ritual and Mana Vault net you two mana in the short term, and Aether Vial turns every creature into your deck into a Blue-proof instant (while netting mana at the same time of course). Pact of Negation is not actually that far distant from these hated and well respected one mana spells. The proper cost for "Counter target spell" is

(Cancel), so short term at least, you can make the argument that Pact of Negation is from a mana perspective at least conditionally stronger than Dark Ritual and Mana Vault (saving you three mana instead of buying you two).

I sense some wagging fingers, some shaking heads. Do you really not get it? That's my fault. I'll try again. At dinner at Paul Jordan's wedding this past weekend, some players from my group were going over some potential decks for the upcoming Legacy Grand Prix, Columbus, and my friend and predecessor as New York State Champion Julian Levin proposed the quite understandable query, "Can't we please just play a deck with Force of Will?" Understandable, as I said. Force of Will is itself short list for best non-restricted, non-banned card ever. Force of Will keeps Jackal Pups off the table when you are on the draw and yet to play a land, and in less friendly hands, has forced down the dreaded first turn Necropotence (damn those restricted and banned combination pieces, always ruining people's fun!). Counter target spell. No mana. What more is there to say?

Pact of Negation is better.

Okay, Pact of Negation is better at least sometimes, and probably most of the time.

The tension is that Force of Will is, or at least largely was, playable -- staple even -- in control and Counter-Sliver style decks. Every Forbidian that can wiggle into the right format plays it. Every Crystalline Sliver dreams of growing up to be the Sliver Queen... But legend has it there is only one (per deck), and if the poor Crystalline can't get there, the next best thing is to get pitched to a Force of Will. "Pick me! Pick me!" cries Hibernation Sliver. "I can hide in plain sight!" People associate Forbidian with the great players. They pair Force of Will in their memories -- and rightly so -- with The Great One. However the Maher victories notwithstanding, it is undeniable that Force of Will was at its degenerate best in the hands of the dirty, stinking, combo player. This new card is a 10-out-of-10 in combo. We'll get to it in various decks. It is fine in control for sure. But Pact of Negation is even better than Force of Will in combo.

The only thing that held Force of Will in check (and not very well, let's be honest, it was really really good) is the extra cost. You needed another blue card and you needed to be on at least two life. Pact of Negation doesn't demand any such blue card. Pact of Negation doesn't discriminate against masters on one. But Mike, you ask. Isn't this no deal at all? Don't I have to pay five mana next turn? Isn't this just like some silver-lined scam that the bank runs at you where they offer to consolidate your mortgage, student loans, and high interest credit cards into one new loan at 5% forever that looks like Giselle Bundchen in two inch high shorts but really stretches $10,000 over 30 years? Well, my dear reader, the answer is no.

No? Didn't you read the second third line of rules text? The one after "Counter target spell"?

In fact I did.

It clearly states that you have to...

There never is another turn.

The difference between a control deck's Force of Will and a beatdown deck's Force of Will is this: Control uses Force of Will defensively. Unless it is the very late game and control has some strange need not to go to another turn, Force of Will, a card, and a life point chimera together to keep control alive, or at least leave him in a good enough position to defend himself. Combo, on balance, uses Force of Willoffensively. It isn't there to stop anything. It's there to rumble. Force of Will is a blunt object; it's the free spell equivalent to brute force. Force of Will in combo forces through a key element. If that element resolves, the bad guy will draw seven, or put five lands directly into play, or resolves some massively expensive enchantment. It is a divine wind. The game is designed to end, and now. If combo fails, combo will die anyway. All his skin is in the game. All his chips are in the middle of the table. All his resources are spent to string together two, or three, or infinite cards.

Ideally, for the bad guy, there never is another turn.

At its savage worst, Pact of Negation is a free Duress that can aim at anything. It is a wonderful redundancy over Force of Will in the big formats, best friend, glad addition, to the repetitive decks that bend the rules of the game like Alexander Pope twisted the limits of the English language.

At the same time, it isn't just that. Magic remains a game of options. The best players are the ones who can make the most efficient plays while leaving themselves avenues of escape, set up false hoards to swindle their foes, and withdraw to clash again another turn. Sure, I'll pay. I don't want to lose the game. If I didn't play this Pact of Negation, and poorly I might add, I probably would have lost. Now you're giving me the option again... Sure. I'll pay! I don't want to lose. In its way -- even when this is not the best way to play the Pact -- it is torn fingernails. It is the weathered palm and ravaged knuckles that allow the desperate explorer to keep a grip on to the rock face. Did I mention? Sure. Sure! I'll pay.

The fact that the card is free is a bigger deal than you might realize. There are combo decks like Trix full of the best in black -- Demonic Consultation, Necropotence, Vampiric Tutor, and Dark Ritual -- that had to cram in Hoodwinks to make sure they had enough blue to support Force of Will. There are decks like Aluren that were good, but were ultimately overshadowed by other combo decks because they couldn't play Force of Will as consistently, therefore could not force their key elements into play as well as some of their contemporaries. The fact that you in all likelihood never have to get to the point where you are depositing

into the bank is significant for decks that can finish with a single gigantic flourish.

As such, one application of this card that I predict -- albeit probably a minority application -- is in the beatdown deck. I think it is so strange and wonderful that the card, while declared by its first line to be blue, demands no trappings of the blue mage to accomplish its free Counterspell. You don't have to discard an Island and another card. You don't have to have one, or three, or any Islands in play to place it in the center of the table, grinning. It is well established that you need neither a spare life point nor a blue card in hand to accomplish its take on Force of Will, certainly not a blue card of particular cost as you might with Disrupting Shoal. In sum, there is absolutely no reason you couldn't (and I didn't say "wouldn't" because that is not established) play this in a beatdown deck. Pact of Negation isn't so far from a Final Fortune. Worth Wollpert and I played Final Fortune in our Necropotence decks way back in 1996 (my first Pro Tour); Worth finished Top 16. You know all those games where if you just resolved your last Char, you would win? That when you miss, your opponent grinds you out for the next fifteen turns, but you both know it is over way ahead of time? Pact of Negation might just be your resolved Char.

Imagine Pact of Negation alongside Platinum Angel. Okay, okay. I know that most games where you can ramp up to a Platinum Angel you are winning anyway. But still...

What about Pact of Negation in control? In Standard, in Time Spiral Block, it is most likely to be played -- at least tested -- in control before combo. I think Pact of Negation is probably fine in control. It isn't as good as Force of Will here because you can't play it on the first turn to stop the opponent's clock card, and long game, the mana actually catches up to you. That said, it should still be more than playable. Pact of Negation should help win counter wars, at the very least.

I see the potential in a great many cards, but not all of them genuinely scare me. This one does. If there is one thing that keeps the follicles in my head, it's that Pact of Negation is not that abusable in my favored format, Standard. This card is a 10-out-of-10 in combo, but the combo decks that can best utilize it are probably Legacy or Vintage. Most of the best combo decks in Extended are Storm, and this card is only slightly better than Duress there. While I think Pact of Negation will be played, I don't expect the card to be at all dominant in Standard, at least not with the tools we have today. And if I'm wrong? I love a fight! That will be some journey, too. As for Time Spiral Block... We've seen that you can hand a World Series of Poker bracelet holder a Discombobulate and he'll show you a Blue Envelope, and that Time Stop can come this close to winning the Pro Tour; basically, any player will play any counter in Block. Pact of Negation is more than just any counter. Otherwise, as good as this Pact is, as good as I expect it to prove itself, I would not surprised if it took the better part of a year to find the right deck to make a big splash in the Magic media.