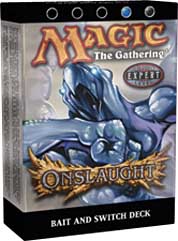 he Bait and Switch deck has a lot of tricks up its sleeve. It features a wide variety of "tribal" cards (cards that work with specific creature types) and a lot of cards that allow you to change one creature's type to another. When this deck has time to develop, it can win in very cool ways. The more you play, the more wacky interactions you'll discover.

The Mistform creatures are the pillars that hold up the whole deck. Each one can transform into any creature type you want. Turn one into a Zombie to regenerate it with Boneknitter, create Goblins to use with Cabal Slaver, or increase the number of Wizards you control to take advantage of Information Dealer. You can even make your Mistform Wall into a Beast so it can attack. If you can pull all these tricks and more with the cards in your own deck, imagine what'll happen when you face tribal cards in your opponent’s deck! If your foe is giving all Soldiers a bonus, you might as well have some Soldiers too.

The fun doesn't end there, though. You can use Imagecrafter, Mistform Mutant, and Trickery Charm to mess around with other creature's types. Your opponent who liked Soldiers so much might wind up controlling a bunch of Elves instead. This is where spells like Peer Pressure and Endemic Plague can be particularly devastating. Change creature types wisely and Peer Pressure will let you steal your opponent's best creatures permanently. If you're feeling more destructive, Endemic Plague can wipe out your opponent's entire army (after you make them all the same type, of course).

Bait and Switch doesn't deal well with fast decks because you need time to get enough mana to play your Mistform creatures and use your tribal tricks. If things go well, you'll be able to slow down initial attacks by trading early creatures or blocking with your Walls. More cheap creature removal spells like Smother or the Torment card Chainer's Edict can help reduce the early stress. And Voidmage Prodigy can really let you take control of the game. If you like messing with other people's minds - and creatures - you won't regret playing Bait and Switch. 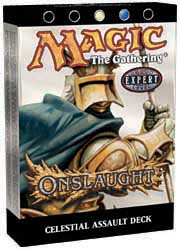 sually, white-blue decks are thought of as "control" decks: slow and creatureless, and not the beatdown lover's style of choice. But if you like to pound your opponent with hordes of Soldiers, the Celestial Assault deck is right up your alley. It uses some of the cooler abilities from white and blue-flying and combat tricks-to take over the battlefield.

Your flying creatures are hard to block and your Gustcloak creatures let you back out of combat if it doesn't go your way, so you should be able to constantly attack with an indomitable army. Just to make sure things go your way, Celestial Assault is filled with spells to protect your marauders. Blue surprises like Meddle and Mage's Guile make your opponent's tactics backfire. And white cards like Inspirit, Piety Charm, and Akroma's Blessing can each be used to either rev up your offense or bolster your defense.

The beauty of Gustcloak creatures is that sending them into battle is a can't-miss proposition. They give you - not the defender - the final say, so you can attack first and make decisions later. If a Gustcloak creature is unblocked or stopped by a smaller creature, great. If a bigger blocker steps up, pump up your creature (if you have the right spell) or just untap and retreat. Make your opponent call your bluff all day.

To make sure you don't run out of gas, use Airborne Aid and Seaside Haven to draw extra cards. Daru Cavalier and Screaming Seahawk let you seek out their twins when you play them, so they're especially good if you expect a mass elimination spell. Play one while holding the one you searched for in your hand, and you'll bounce back fast if the board is wiped clean.

There are quite a few Onslaught cards that would be excellent additions to this deck. Aven Brigadier is a natural fit since it gives bonuses to all your Birds and Soldiers and comes with a large flying body to boot. Mobilization lets you churn out Soldier tokens and allows most of your creatures to attack without tapping. With Celestial Assault, you have nothing to fear in combat - so go pick some fights! 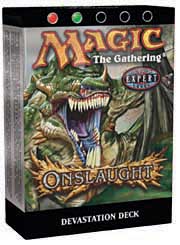 f stomping your opponent into submission with huge creatures sounds like your idea of a good time, welcome to the beefy world of the Devastation deck. All the ingredients you need are right here: big creatures, bigger creatures, and ways to get enough land to play them. Throw in some damage spells to eliminate your opponent's blockers, and you've got a recipe for a good whompin'!

While Beasts are obviously the main focus of the deck, you'll find most of them too expensive to play without a helping hand. One of the most important cards in the deck is Explosive Vegetation. Using it to fetch two basic lands from your deck and put them into play increases your mana resources dramatically. Wirewood Elf and Elvish Pioneer also help get your monsters on the table as quickly as possible. With the right draw, you can actually have six to eight mana available on your fourth turn.

Even if you do find yourself hurting for mana early in the game, you'll still be able to play most of your Beasts. How? You can play a Beast with morph face down as a 2/2 creature for only

mana. Your opponent won't know how much of a threat your face-down creatures are, and some of them are cheaper to turn face up than they are to play from your hand. Imagine your foe's face when your 2/2 critter suddenly becomes a 7/6 Towering Baloth! If you need to, don't be afraid to use Barkhide Mauler's cycling ability to search deeper into your deck for land. You'll draw more Beasts later to make up for it, especially with the help of your Wirewood Savages.

Most of the Beasts in the deck can be swapped out for your own favorites. Consider Beasts with morph or cycling, which add variety without straining your resources. Krosan Tusker is a good choice because it provides land early or a huge creature late. Hystrodon is a 3/4 trampler with morph that lets you draw a card whenever it deals combat damage. And Ravenous Baloth is another 4/4 Beast that lets you sacrifice a Beast to gain 4 life. As long as it's big, it'll find a home in Devastation. 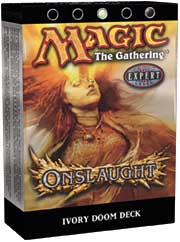 black and white deck? Evil and good cooperating? Inconceivable! Or is it? Obviously, the Ivory Doom deck is not your typical creature deck. Unlike the usual "weenie" strategy, which tries to overrun opponents with lots of early creatures but saves nothing for later, Ivory Doom has unique threats that emerge once the game has progressed. The Clerics interact in amazing ways, and with the right cards in play, you'll be virtually untouchable.

The key is making sure you survive long enough to reach the midgame. Use cards like Pacifism, Swat, and Smother to neutralize or eliminate your opponent's most dangerous threats. Since many of your Clerics do a great job of protecting themselves and each other, ration out your elimination carefully. For example, don't let an early 3/3 Beast scare you. Go ahead and let it hit you a few times. Soon you should have so many healers in play that your opponent can no longer safely attack. If you're patient, you'll have spells waiting in your hand to deal with any creatures that are truly fearsome.

Once your opponent's attack has stalled out, you can counterattack with your strong creatures. Doubtless One will often be an enormous threat that helps you gain back any life you lost while setting up your defense. Gangrenous Goliath is a relentless attacker that keeps rising from the grave. And you'll use both Cabal Archon and Starlit Sanctum to slowly drain your opponent's life away by sacrificing excess Clerics. The Archon and the Sanctum become even more deadly once Sigil of the New Dawn is in play since you'll be able to sacrifice the same Cleric over and over.

If you're looking to improve this deck, try adding some especially powerful Clerics like True Believer or Rotlung Reanimator. The Believer protects you from spells, and the Reanimator turns your dead Clerics into fresh Zombies. You could also try a mix of Clerics that works better against your friends. Are Goblins too pesky? Add another Foothill Guide. Zombies getting you down? Another Disciple of Grace or two can fix that. Who knew light and dark could work together so well?