owdy, all! It's that time of year again. We're nearing the halfway point of the Eventide preview season and I have to say it's about time we previewed an Ouphe. The bar has been set pretty high after Shadowmoor brought us a pair of nice utility Ouphes, the card-drawing Dusk Urchins and the life-gaining and pun-loving Kitchen Finks. Joining Spellwild Ouphe as Ouphes who don't particularly care about the activated abilities of artifacts (ignoring for now the Brownie defectors), these new tribe members showed that just because your creature type sounds incredibly silly doesn't mean you can lay the beats and provide hours of entertainment for the whole family. (I guess Tarmogoyf already proved that.) Like Dusk Urchins and Kitchen Finks, my preview card expands our definition of what an Ouphe can do. I've never seen an Ouphe like this before: 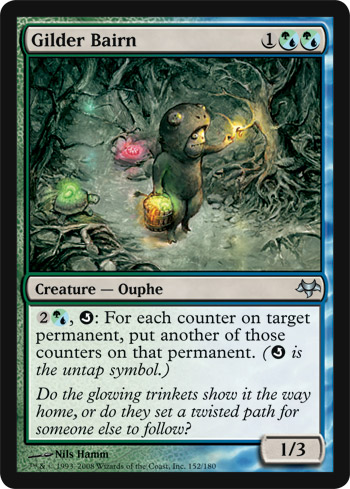 Note that according to the card FAQ, "Gilder Bairn's ability will replicate each kind of counter on the targeted permanent, not just +1/+1 or -1/-1 counters." Any type of permanent and any type of counter is fair game. Some permanents can have more than one type of counter on them, and both types will be doubled by Gilder Bairn. For example, imagine you have an Aboroth in play with one age counter and one -1/-1 counter on it. Use Gilder Bairn's ability targeting Aboroth, and you will end up with an Aboroth that has two age counters and two -1/-1 counters on it. With cards like Frankenstein's Monster and Ebon Praetor that can accumulate a motley collection of +1/+0, +2/+0, +2/+2, +0/+2, and +1/+1 counters, Gilder Bairn will give them twice as many of each type of counter. Good luck keeping track!

Blue and green is probably my favourite colour combination. Of all time. Sure, ebony and ivory hold some appeal, as do silver and gold. Blue, green, orange has its moments, but, ultimately, I think the orange is unnecessary. With blue and green alone, you've got a mitt full of cards, a boatload of mana, a bushel basket full of beef, and a whole can of whoop-ass. Plus, you have the ability to just say "No!" at any time. "Terror on my Primalcrux? No, sir: Cryptic Command!" We all know it's bound to happen. What more could a grown mage want?

Besides their unique strengths, as you can see from this diagram, the areas where blue and green overlap are totally awesome! At least for the Johnny. 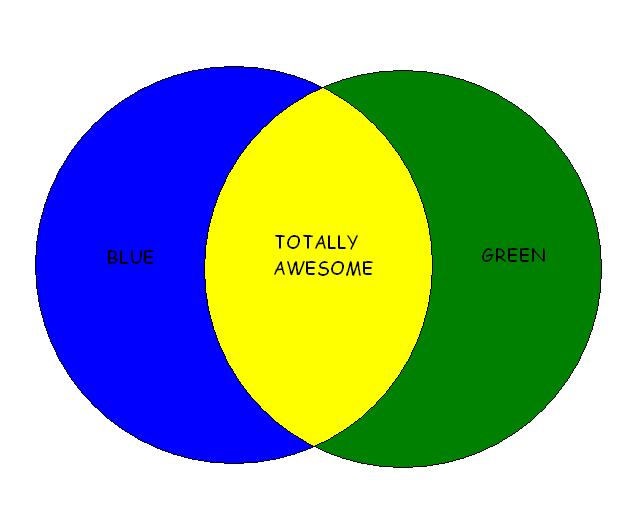 Just think: If you start with a single, solitary counter, and you take that counter and double it each turn, by the end of the month you'll have more than a million dollars!

As with any of the creatures bearing the untap symbol, Gilder Bairn could use a little assistance if you want to get the most out of its ability. There are many ways to tap the Bairn. The first and most obvious method is to simply attack with it. It's got a big enough butt that it can probably survive its fair share of combat steps without any help, but giving it evasion somehow couldn't hurt.

Then, of course, you've got the recent auras that grant the enchanted creature a tap ability. Utopia Vow seems to be a popular one, since it gives the creature a mana ability which effectively reduces the cost of the

creature's ability. As Devin Low discussed last week, on certain creatures (Leech Bonder or Puresight Merrow), this can allow you to use the untap ability as much as you want. Presence of Gond, Power of Fire, and Elemental Mastery are other possibilities. I'm particularly excited about the idea of using Gilder Bairn, Presence of Gond, and Door of Destinies together (with other Elves, naturally). Tap the Bairn to make an Elf, untap it to double the number of charge counters on Door of Destinies, lather, rinse, and repeat. Pretty soon you'll have an army of enormous Elves (and very shiny hair).

Since Gilder Bairn is an Ouphe, the "tap an untapped [creature of a certain type]" cards won't be useful (i.e. Drowner of Secrets, Master Apothecary, Patron Wizard, etc.), but there are plenty of cards that only require that you tap a creature. Recent additions to this group include Revelsong Horn, Springleaf Drum, and Mothdust Changeling, while Aura of Dominion, Glare of Subdual, Opposition, Kyren Negotiations, Hair-Strung Koto, and Koskun Falls (among others) fill out the back catalogue.

Now that we can assure that our Ouphes will get good and tapped, let's take a gander at some of the different kinds of counters we can be doubling.

Since these are the counters du jour, I figure we might as well start here.
One cool thing about Gilder Bairn is that it has a bit of mean streak. Sure, it likes to make things bigger and better, but it moonlights as an Assassin. Draw first blood with a
-1/-1 counter courtesy of Leech Bonder, Gnarled Effigy, or Grim Poppet, and Gilder Bairn can swoop in to finish the job.

Grafters! Spikes! Hydras! Triskeli-whatevers! Vampires! Clockwork Beasts! Heck, Clockwork Vampires! There is no shortage of creatures that enjoy being encumbered by +1/+1 counters. One of them (Solarion) can even go about doubling those counters by itself. With Gilder Bairn, Evolution Vat, and Doubling Season all easily fitting into the same deck, I foresee some very large Solarions in the near future.

Charge counters are another "standard" counter, at least since Mirrodin. There is ample reason to double these counters as well. You might want to produce lots of mana (Altar of Shadows, Black Market, all the Mana Batteries), gain tons of life (Clearwater Goblet), kill creatures (Infused Arrows, Heliophial), make a whole bunch of Snakes (Orochi Hatchery), make a whole bunch of very big Snakes (Riptide Replicator), or just do whatever it is that Ventifact Bottle does.

Before Y2K, there was Armageddon Clock. One of them has pretty much no effect at all and the other is a computer glitch. Counting down to Armageddon is fun and all, but the fact that any player can turn back the clock is a little disappointing. Add Eon Hub to skip the upkeep, and your mutual destruction is practically assured. Heck, you could use Gilder Bairn's Ouphe-y brethren (Brown Ouphe) to counter any attempts to remove the doom counters. Armageddon Clock also happens to be the only magical clock that actually works with Clockspinning (except for Mistform Ultimus, of course).

A fan of pyrotechnics? Try Bomb Squad, Incendiary, and Goblin Bomb. Just like setting things on fire? Why not use Ghitu Fire, powered up by Braid of Fire, Gemstone Array, and Fungal Reaches? Prefer to jump through some hoops for a more satisfying (if unlikelier) fiery cataclysm? Try Molten Hydra, or Spike Breeder and Kyren Negotiations. Do you like your arsonists to sport skin-tight leather suits and goggles? Call on Chandra Nalaar to set your blazes. Gilder Bairn just speeds up the process.

Um, so, yeah. The planeswalkers. Gilder Bairn allows you to fast-forward right to their "ultimates." Sarkhan Vol works especially well with Gilder Bairn for all I know!

While Gilder Bairn can't do anything about the time counters on suspended cards the way Clockspinning can (they aren't permanents), it can keep your creatures with vanishing around to fight another day. The cards with fade counters work similarly, but the ones that allow you to "spend" fade counters to accomplish some goal (like Parallax Wave, Woodripper, Saproling Burst, or Ancient Hydra) are especially good with Gilder Bairn. With some shrewd resource management, you can keep these cards around indefinitely while at the same time removing creatures from the game, destroying artifacts, creating Saprolings, or dealing damage virtually at will.

If ever there was a card that was made for Gilder Bairn, it's Coral Reef. Not only is it a permanent that comes into play with counters and can redistribute those counters to other creatures, but it also provides a handy tap outlet for your Gilder Bairns. What can you possibly use polyp counters for, you ask? Well, for starters, you simply buff up the backsides of your creatures. Like I always say, a 1/4 Gilder Bairn is better than a 1/3 Gilder Bairn. Those +0/+1 counters can turn certain creatures into face-smashing monsters if you can somehow switch their power and toughness (Thanks, layer 6e!). Your polyp-enhanced Aquamoebas and Turtleshell Changelings will become serious threats if they can get through unblocked.

I used to like to play decks that pretty much do nothing. For a while, I had an oversized blue-white deck that did little more than stall the game with an arsenal of counterspells and recurring Hesitations and Standstills (Thanks, Hanna!). Meanwhile, I would be playing cards like Portent and Ransack to ensure that my opponent drew nothing relevant (i.e. nothing but lands). It wasn't a particularly good deck, mind you, but it was fun to see exactly how long I could get away with doing nothing. Story of my life.

With Darksteel Reactor, a win condition that, unassisted, takes twenty turns to do its thing, you know we're going to have to buy some time. Of course, Gilder Bairn speeds things up, so I made sure that my stalling techniques also worked with the Ouphe. Spike Weaver can keep creatures off your back indefinitely as long as you periodically double the number of counters on it. Utopia Vow holds a single creature at bay, but doubles as a tap outlet for your Gilder Bairns. Experiment Kraj, in a roundabout way, provides another way to tap your Ouphe.

Normally, Parallax Tide eats your opponent's lands and spits them back out, but with Gilder Bairn doubling the number of fade counters on it each turn, you can eventually ensure that you can remove every land your opponent can play. Rune Snag and Voidslime protect your key cards, while the latter can also be use to counter Parallax Tide's triggered ability—you know, the one that gives your opponent all those lands back. With enough verse-counter doubling, Recantation becomes a one-sided Upheaval. Here's where I ended up:

Until next time, have fun bairn it all.