Out of the Shark Tank and Into the Mana Pool

are a couple of changes this week. The first, and perhaps most obvious, is a change in format. We are breaking from the usual Swimming with Sharks to preview a card that is pretty interesting, has a lot of possibility, will generate a good deal of general interest... but will probably not see main deck play at the next PTQ. Arcbound Ravager this is not -- AND THANK GOD FOR THAT! The second change represents a fundamental shift in a classic card, the most recent look at a long line of hinted changes. The last change is... well... You can start rejoicing, my legion of Timmys. Like the undocumented worker long waiting in line at INS, you've finally got your green card! 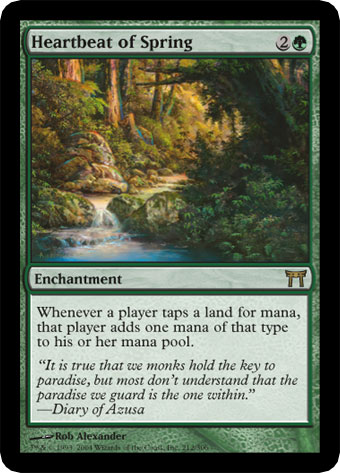 No, no. Your eyes are NOT deceiving you. This is, in fact, the exact same card as this, not seen since the days of Fifth Edition:

Well, maybe it's not the EXACT same card. Nor is it a "functional reprint" as our former editor Aaron Forsythe described them during Ice Age week. That pesky green mana symbol rears its leafy head once again. As a direct evolution, it seems to me that Heartbeat of Spring came about like this:

First we have Mana Flare, the classic. A powerful effect, to be sure, Mana Flare never really found its niche as a shark card, nor dominated any constructed format. Swap one mana from colorless to green, though, and with Overabundance, the concept saw a little more use. Overabundance was a staple of Invasion Block sideboards. Many of the G/R decks that showed up at PT Tokyo played Overabundance not just as a Mana Flare, but as a straight up source of damage as well. Sure, the Mana Flare aspect could help power out giant threats like Skizzik and Shivan Wurm, certainly ended a lot of dreams with giant Ghitu Fires or Urza's Rages to the face, but the ManaBARBS bit of the card made it sticky for the opponent to play his defensive cards back. Because the G/R decks were so much more aggressive than their opponents, the "hurt myself" half would usually work to their advantage in much the same way that a burn deck can end the game with a big Fault Line.

That said, you aren't going to find a lot of people who look at a card like Overabundance and continue to think of the red half as the mana half. The card is half Mana Flare and half Manabarbs. Manabarbs, like Earthquake and Flamebreak, is a very red effect. Mana FLARE, despite being originally red, is a pretty green ability. After all, green is the color that gave us Birds of Paradise, Llanowar Elves, and Wild Growth. If there is one thing that the color does well, it is accumulating mana. This card takes a classic and puts it in the right spot on the Color Wheel.

R&D has actually prepared us pretty well for the coming of a card like Heartbeat of Spring. Two cards of similar effect have even dominated constructed tournaments over the past two years. Mirari's Wake was so powerful that players said things like "you never lose when you untap with Mirari's Wake in play", and Vernal Bloom just finished winning the US National Championships this summer, so you know that the power of the effect is definitely there.

The progression to Heartbeat of Spring from this half of the family tree is one of reducing mana cost from five to four to the cheapest ever, three. But along with that reduction in mana cost, you have an increased likelihood of your opponent getting to piggyback the Mana Flare effect. With Mirari's Wake, you and only you get the benefit. Mirari's Wake decks took full advantage of this and played extremely powerful -- and expensive -- threats that would often end the game immediately. They came across the table with Firecat Blitzes, took several extra turns in a row with Time Stretch, or simply drew infinite cards and prevented infinite damage with Mirari and Cunning Wish tricks... That's why players so often joked that they couldn't lose if they got such an untap.

Vernal Bloom decks had a built-in design constraint. They could only play Forests if they wanted to get the benefit of Vernal Bloom. This was a double-edged sword of a limitation, though, because it also meant that ONLY Forest-playing opponents would be able to ride the benefit of the Bloom. Even then, only mono-green opponents would be able to get the same effect as the Bloom player himself: even if an opponent were partly green, the Vernal Bloom player could usually still stay ahead.

Now if this were a regular Swimming With Sharks article, I would go into how Heartbeat of Spring is a dangerous dual-edged sword, and that even though you can consistently play it earlier in the game than either of its recently dominating green predecessors, it is your opponent who gets the first option to break it. I would talk about how letting the opponent have the first turn with six or even eight mana might mean that you don't GET a next turn, or that the prevalence of Affinity decks from the previous block means that you might just be running up against a lot of discounted main-deck Naturalizes. But you know what? This ain't a regular Swimming With Sharks article. 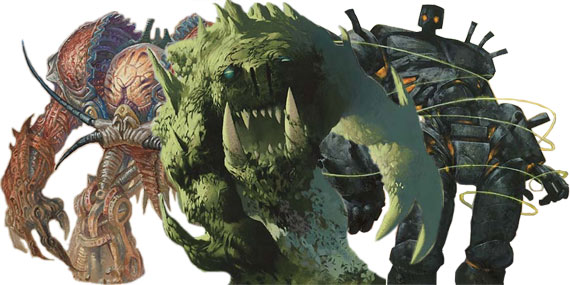 Instead, let's look at the freedoms and possibilities that Heartbeat of Spring offers. Unlike Vernal Bloom, it lets you tap whatever kind of land you want for mana. You aren't locked into a Forest only -- or even G/W -- paradigm. You can SPLASH Heartbeat of Spring if you want. Use it in a U/g Palinchron deck to set up a Stroke of Genius kill in one turn if that's what you desire. Another thing is that maybe it can be good for another player to get first use out of your Heartbeat of Spring... if that player is on your side. In group games, Heartbeat of Spring might be a powerful enabler for your teammates. You might play a Heartbeat of Spring and wink to your first teammate, who plays a giant monster with six mana. He then tips his hat to your second teammate who taps his Birds of Paradise and three lands to cycle Decree of Annihilation. Your opponents might never even get a shot to use this card's powerful effect!

I know that much of my audience is by now salivating with ideas for Heartbeat of Spring decks. Some of you will try to play huge creatures that don't normally have a chance to make if off the bench, while others will coordinate decks with friends to set up perfect tag team sequences. The nastiest among you will figure out a way to set up a turn where Heartbeat of Spring wins the game before the opponent even gets an untap. At the end of the day, this is a powerful card that will open many doors. Like Spring itself, this Heartbeat is an agent of change, heralding a shift from red to green as it doubles the mana that everyone gets to play.