Path of the Planeswalker Scheduled for January 2010 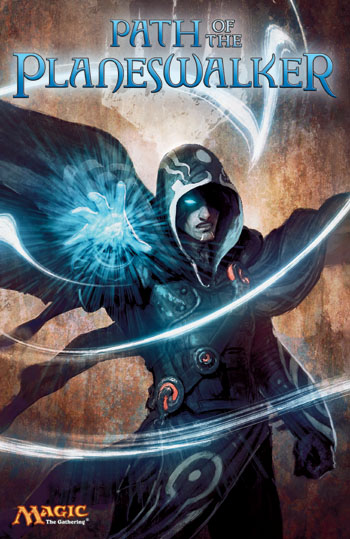 Path of the Planeswalker, Wizards of the Coast's first-ever Magic: The Gathering graphic anthology, is scheduled to be released January 5, 2010. This 192-page action-packed collection combines the entire planeswalker web comic series, as well as a never-before-seen bonus comic for MSRP $14.95.

In this popular anthology, readers get adventures from all their favorite planeswalkers including battles between mind-mage Jace Beleren and the impulsive pyromancer Chandra Nalaar. The mercurial necromancer Liliana Vess tangles with the savage Garruk Wildspeaker and readers learn more of the artificer Tezzeret's past with the Seekers of Carmot.

Path of the Planewalker represents the high quality story-telling readers have come to expect from the world's most popular trading card game, Magic: The Gathering. It features lavish illustrations by some of the industry's best known artists such as Mark Texeira, Christopher Moeller, Jason Shawn Alexander, and Aleksi Briclot. For more information on Path of the Planeswalker and other Magic novels, visit www.wizards.com/magicnovels.