hanges are coming up very quickly for DailyMTG.com. Among these changes are:

That's some change right there.

Too much change can be dangerous thing, so before we get into them, let me share some stability with you. Here are five non-basic lands you'll see in Magic 2013. 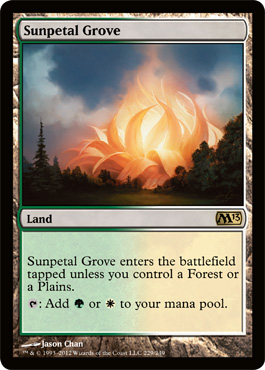 When Savor the Flavor temporarily went away, I told you all it was just that: a hiatus. I chose the word hiatus thinking it carried the least ominous connotations and would soothe people's fears. But quickly I found out I was quite wrong and that the word carried a more sinister feeling to some readers. I did my best to assuage fears and let people know that we'd have creative Vorthos content back on DailyMTG.com; it just was going to take a little time. 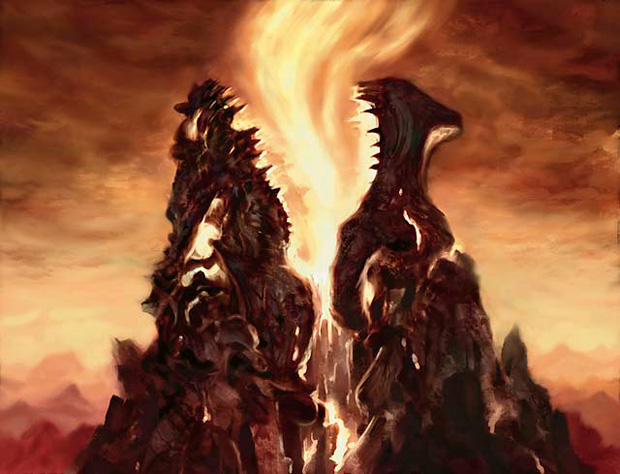 One reason that I did not simply have a new creative-focused column up and running immediately was that we wanted to take time to evaluate Savor the Flavor. I sat down and studied the traffic stats for the column, I met with the creative team, and then I wrote down a business case for the column outlining my desired goals for it.

One thing you might not think about is that the creative team is part of R&D. So once it had my desired ingredients for the new column, the team did some brainstorming and came back with two options.

Saffron was the codename for this process as I worked with the creative team to develop the new column. I'm jumping ahead slightly, but I want to go ahead and lay out details for Uncharted Realms, the name for Saffron. It will be a weekly column that kicks off this Wednesday and will be written by Jenna Helland with help from the creative team. 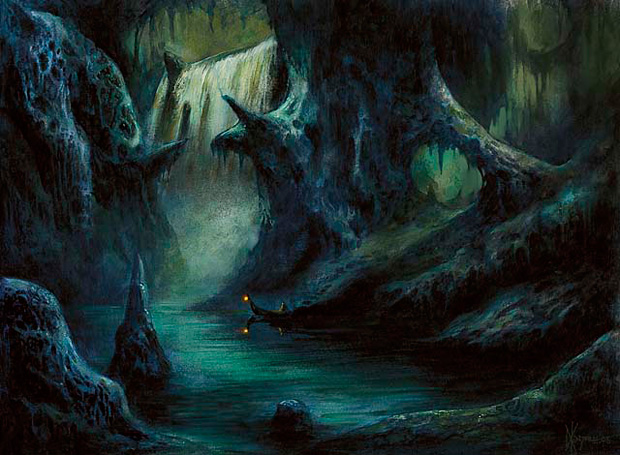 With Uncharted Realms, you won't be getting our behind-the-scenes creative stuff. You'll instead get a new piece of Magic's story. Each article will be tied directly to a card in Magic. It might be about the character on the card; a piece of flavor text blown up and expanded into a short story; or an encyclopedia entry about some beast, event, or ancient relic. Every week, you're going to get to meet, see, or visit a different piece of Magic's Multiverse.

We'll still have behind-the-scenes creative content, but that will be served as extra features along the way and for the most part it'll peek out around new sets. I should mention that beginning with Return to Ravnica, you'll be able to look forward to the Planeswalker Guides, which will take Uncharted Realms's slot for a few weeks leading up to the set.

By adding Uncharted Realms to the weekly lineup we're a bit crowded on Wednesdays, so I'm going to be moving Jake Van Lunen to Thursdays.

Despite the fact that the majority of the feedback I've received has been critical, Building on a Budget has continued to be among the most popular columns on DailyMTG.com.

Unlike with Savor the Flavor (where I wanted people to understand that Savor the Flavor, or some creative piece of content, was going to come back), I want to be quick and direct about this:

I've decided to retire Building on a Budget.

The column struggles to find a footing between the competitive players looking for an easier-to-acquire FNM deck and casual players looking for something new to bring to their casual kitchen table games. This imbalance, regardless of the author, makes it a tenuous column which is likely to always leave readers dissatisfied. I worked with Jake to try new things and find a new balance in the column, but we never reached a point we were satisfied with. 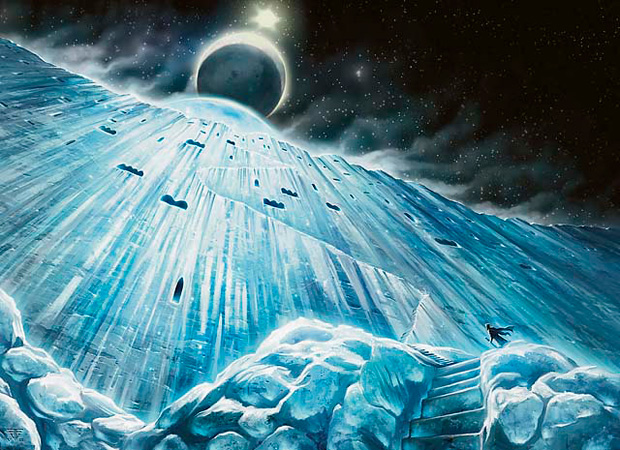 Retiring during a peak of popularity is something lauded among athletes: "go out on top" is a popular phrase. It is most often used after the person has won an event or a championship. But that accolade doesn't really apply to a column. This is like capping a functioning oil well. If the well continues to deliver oil, then why cap it? Well, often, because there are other factors to consider.

I really want us to have a column that focuses on Magic Online and I think it will also be a top-performing column. Without adding yet another columnist, how do I accomplish this? Retiring an active column and reassigning the author.

I pitched the idea to Jake that I was interested in moving him into a Magic Online-focused column. He was immediately on board and responded with a handful of ideas. From those ideas we created what you all will come to know as Perilous Research.

The column will be entirely focused on following the Magic Online metagames as seen through the results of daily events on Magic Online. It'll look at the online events and examine how decks change from week to week or even day to day. Now, lest you fear that this will be all Standard all the time, he'll be covering the main formats with a tendency to cover the current PTQ format. 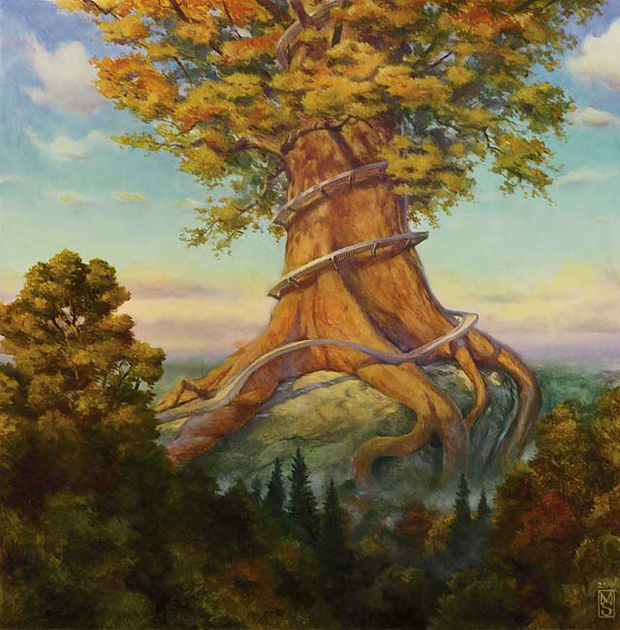 This new column will go up on Thursdays alongside Mike Flores's column Top Decks starting next week. This Wednesday, Jake will deliver the final Building on a Budget.

With these weekly line up shifts, Jake's move to Thursday means we're overbooked on Thursdays. So I'm moving Noel and From the Lab to Mondays. Don't worry; there's no column change for him—he's still writing From the Lab with its diabolical Johnny antics as he brews the decks in the laboratory.

But What About the Features?

Features are a unique challenge; they require a great deal of management as every week had to have one. A new author, a new topic, all scheduled to hit on Mondays. What the new expanded line up does is to allow Features to become freed from Mondays and thus more flexible. Rather than putting a feature on Monday because that's what the schedule requires, we can now put one on Friday for an event or Wednesday for a Magic Online change going into effect after downtime.

Features are important to our content plan because they allow us an easy way to do something different, which might not comfortably fit into one of our scheduled columns. This plan simply allows them to be more flexible and... bendy.

And our last change starting this week is that we're going to move the weekly wallpaper to Wednesdays and have it take over for the Draft Viewer, which happens in the Daily Activity slot. 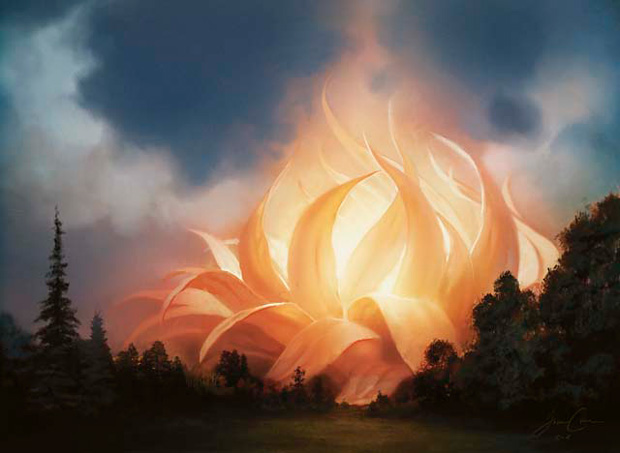 The Daily Activity slot has a problem of being overlooked by visitors. The content we put up there simply underperforms across the board. For that reason, I want to take one of our most popular Arcanas, the Friday Wallpapers, and put it into that slot to replace the least popular of the Daily Activities. This opens up Friday for another Arcana—whatever Monty might come up with.

Today I have been the harbinger of change, trumpeting, explaining, and changing the site—with some changes starting this same week. Harbingers are always greeted with a mixture of excitement and fear, and usually more of the latter. Change can be scary. Hopefully, this article has had the desired impact and quelled some of your fears about the changes.

As always, please do not hesitate to send me your feedback using the link at the bottom of this article. I am certain these changes will elicit strong responses from some of our readers, and I will endeavor to respond to every response I receive.