Photos from the first Worlds 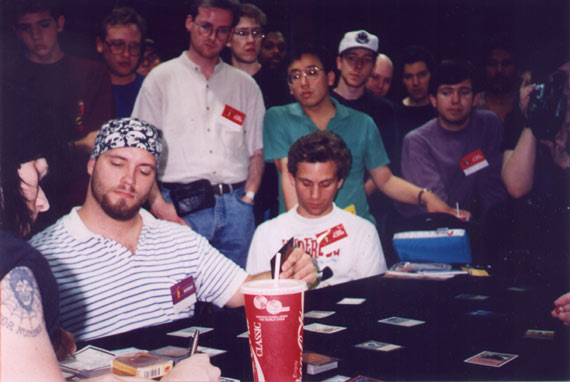 During the finals, a shockingly young-looking Mark Rosewater keeps careful track of everything Zak Dolan does. The person immediately behind Mark is Jim Lin, who would go on to become the Vice-President of R&D. Former editor of the Duelist Companion Rhias Hall is barely visible behind the video camera on the right. 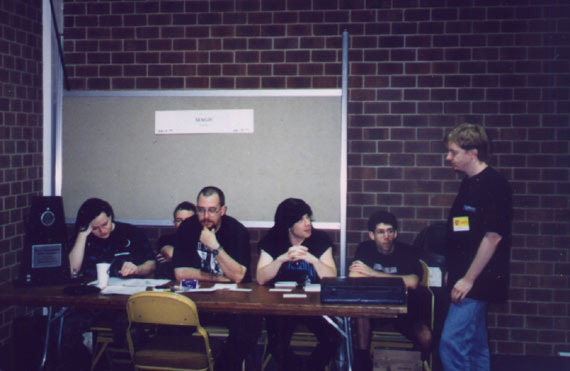 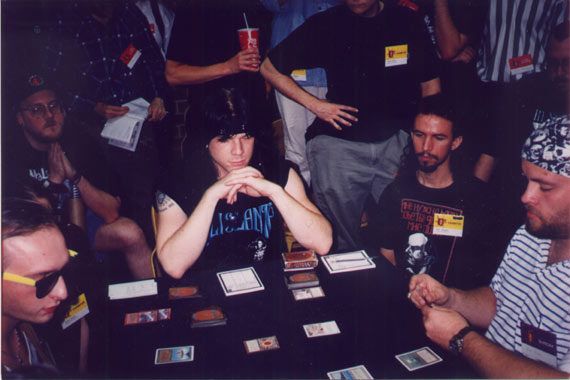 Head of the Duelists' Convocation Steve Bishop presides over the finals between Bertrand Lestreé and Zak Dolan. 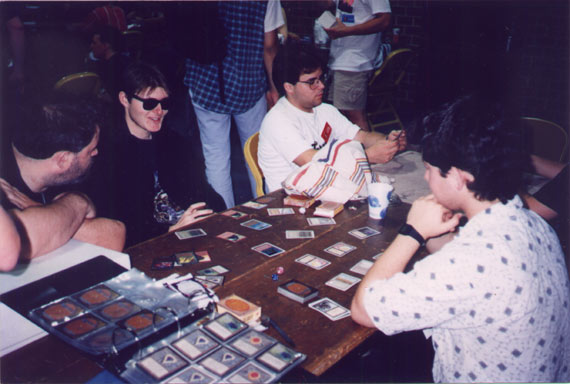 At the first World Championship, there was a lot of trading. Here, someone's trade binder has been left open to the page with two Black Lotuses and six Moxes. 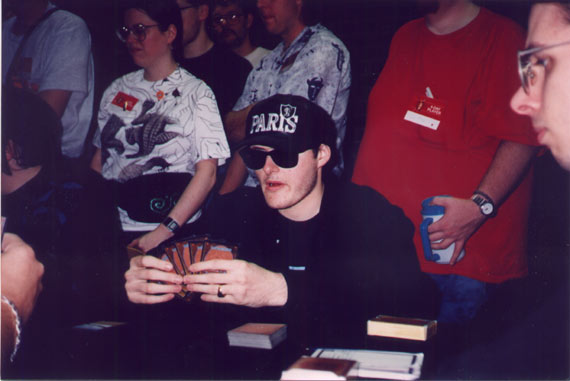 Semifinalist Cyrille DeFoucand, in the process of losing to Bertrand Lestreé. The woman on the left in the M.C. Escher shirt is eventual Magic Rules Manager Beth "bethmo" Moursund. The face on the right belongs to Jared Earle, oneo f the founders of Nightfall games, which later became part of Wizards of the Coast via the UK office. 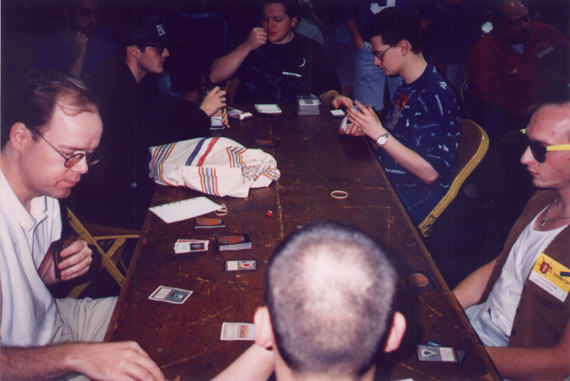 Back then, nobody used sleeves. Note the condition of the table that both players have Moxes on. 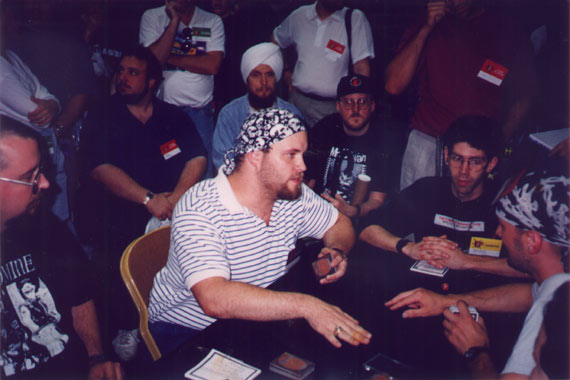 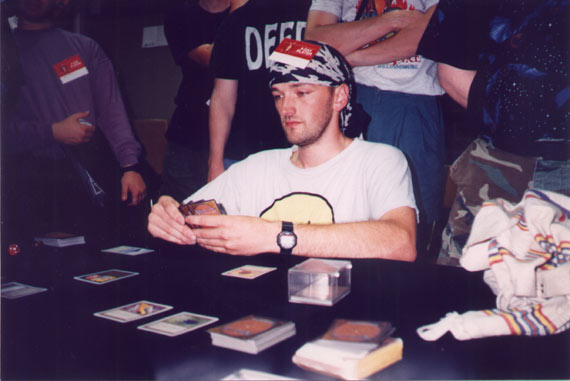 Belgium's Dominic Symens wonders how he's going to get to the finals while staring down a Black Vise and a Lotus. The answer, it turns out, is that he wouldn't, losing the semifinals in two straight games. 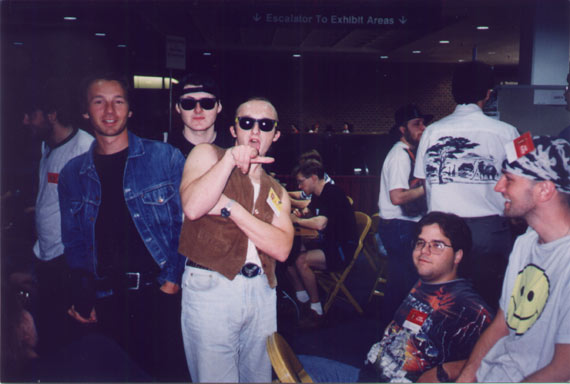 The French contingent: an unidentified French player, Cyrille De Foucand, and Bertrand Lestreé. Looking on is a Spanish player we don't recognize (in the glasses) and Dominic Symens. 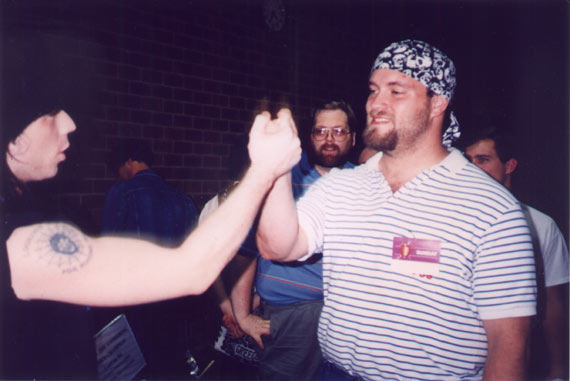 Steve Bishop congratulates Zak Dolan on his victory. The awards ceremonies have gotten somewhat more formal over the years. 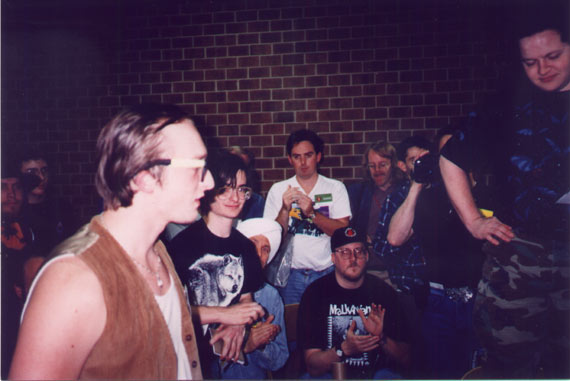 Bertrand Lestreé, possibly accepting applause. Incidentally, see that guy on his left, in the glasses? With the wolf on his shirt? That's Chris Page, one of the designers of Ice Age. He and Mark Rosewater transcribed everything that happened in the Finals. 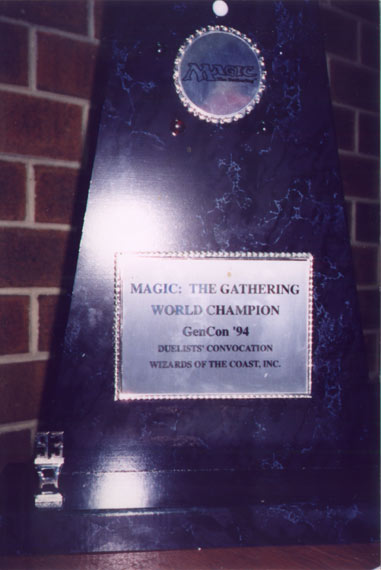