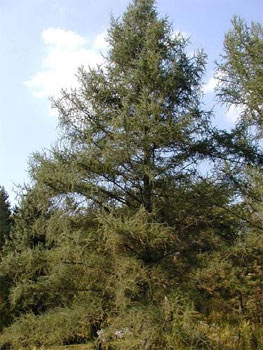 to Treefolk Week! With Snow Week and Hoser Week already in the books, I guess dedicating a whole week to trees is the only way we've got left to pander to the Canadians. And pander I shall!

I'm going to start with a little combo I came up with two seconds ago: Tamanoa + The Rack. It's like The Rack has lifelink! The resulting deck will of course be named Tamarack, after the small, slender tree found primarily in northern half of North America. That's double north. A member of the larch family, the tamarack is easily recognizable (even from great distances) by its delicate deciduous foliage.

If you just enjoyed that fun tree fact, you're in luck: there's plenty more where that came from! It's called the Internet (or, I guess, the forest). Poke around in it for a while. You'll find all kinds of neat things. In the meantime, I'm going to play Magic cards.

Of all the new Treefolk in Lorwyn, Doran, the Siege Tower is clearly (and somewhat ironically) the most powerful. The 2007 Magic World Champion, Uri Peleg, took home the big trophy playing a Standard deck containing four copies of the sick son of a beech. Doran is just fine all by his lonesome, but he's just a little bit better when he's turning Tarmogoyfs into, uh, more powerful Tarmogoyfs, Birds of Paradise into Scryb Sprites, and Ohran Vipers into Elephidians. Of course, those creatures are also first-rate monsters, which explains how Peleg's deck could win a major tournament, and a deck that combined Doran with, say, Kami of Old Stone could not.

Well, it's a good thing I'm not trying to win any tournaments, because there are plenty of fun and/or silly things you can do with Doran, the Siege Tower outside of such a setting. For instance, some people—nay, some evil geniuses—would have you kill your opponent on turn three by playing Shuko (or Shaman en-Kor) then Daru Spiritualist, and following that up by playing Gnarls Barkley himself.

Sure, turn-three kills sound both fun and silly, but I'd prefer to do something altogether more janky. It is a well-known fact that Doran brings out the worst in people, places, and things. He turns otherwise Angelic Walls into hellacious ass-whompers, transforms Forbidding Watchtowers into foreboding ones, and makes Dancing Scimitars do the Electric Slide. I know, it's terrifying to think about. Worst of all, he makes the most peace-loving character in Magic into a killing machine. Poor Karn, Silver Golem. No more Mr. Passive Resistance, he's out to (reluctantly) kick some butt. With Doran at his side, Karn battles opposing critters as an 8/8. He'll still try to go easy on them, but that just makes things worse.

With this unlikely duo as the starting point, I started to look for artifacts that pump toughness. That meant armor: Slagwurm Armor, Living Armor, and Belbe's Armor, as well as Scale of Chiss-Goria. Ensouled Scimitar can attack as a 5/5 flyer if you control Doran, or it can simply make the Treefolk into a veritable 10/10. Of course, all of these artifacts can also be animated by Karn's touch if need be.

You can't play Doran without some mana-fixing, so I went with Birds, Treefolk Harbinger (note that it can fetch dual lands), and the somewhat in-theme Wanderer's Twig. The "removal suite" is also apropos (Roots and Rootgrapple), as is my pump spell of choice (Twigwalker).

During my search for cards to pair with Doran, I plugged "+0/+X" into a number of card databases. This led me to Living Armor. It also turned up this trio, all, remarkably, from Legends: Kry Shield, Subdue, and Great Defender. Boy, they don't make 'em like they used to. Thank God.

Wow, that was a stretch even for me. It doesn't even make much sense when translated. Unfortunately, I spent a frighteningly larch amount of time on TreeCanada looking fir potential tree-related puns. I've already used alder best ones, but I maple some of the less poplar ones out of my bag of tricks and yews them later. Cedar sycamore hemlock.

Here's another Doran deck, this time using toughness-pumping discard outlets like Tireless Tribe and, uh, Krosan Archer to fill your graveyard with, um, Conclave's Blessings (and Improvised Armor and Fists of Ironwood) before you play a game-affecting Retether. I think I mentioned somewhere that this would be a little janky.

I included some other cards that work well with Doran, like Silklash Spider, Swooping Talon, and Crowd Favorites. I left out some others like Spirit Weaver and Oathsworn Giant. The lone copy of Solidarity gives the deck its name, but given the rest of the deck, that slot should probably go to Aven Warcraft.

Ol' Doran isn't the only all-walkin', all-talkin', all singin' tree whose board-way melody we should all be paying some heed. No, not Singing Tree. I'm talking about the original Tower of Wow-er: Timber Protector. Besides making your piddly 5/7s into 6/8 behemoths, T.P. makes them indestructible to boot. An unrepentant tree-hugger (What did you expect?), he keeps your Forests safe from harm as well. As long as he's around, you don't have to worry about Orcish Settlers, Boggart Loggers, Goblin Gardeners, or Akki Florists. Never mind that the Loggers can take out T.P. himself. That's called taking one for the team, and Timber Protector is nothing if not a team player. Just look at how he'll stick up for his Forest friends, even if they've magically transformed into Elves.

This deck is pretty straightforward. Fish a lot of Forests out of your deck with cards like Search for Tomorrow and Hunting Wilds. These Forests will make your Dauntless Dourbarks huge and your Ambush Commander-led Elf army enormous. Once all of your lands are Elves, your Elvish Branchbenders can then turn them into X/X Treefolk. Basically, they become slightly less dauntless Dourbarks. Timber Protector makes everybody but your Elves indestructible, naturally.

T.P. is fine with any animated Forest, whether it's because of the Ambush Commanders, Elvish Branchbenders, Hunting Wilds, or Genju of the Cedars and Living Terrain. Throw in an Earth Surge and a Strength of Cedars for flavour and you're all set.

I Will Not Lignify That With a Response 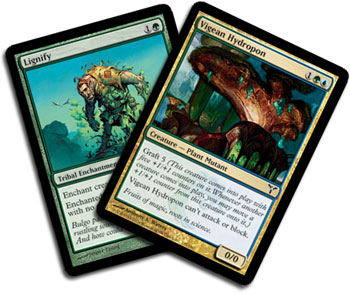 The last Treefolk deck was inspired by a cute little combo sent to me by Efrén R. It consists of one part Lignify and one part Vigean Hydropon. You see, Lignify is a Treefolk Aura that turns the creature it enchants into a 0/4 Treefolk with no abilities. Vigean Hydropon, meanwhile, is an undercosted 5/5 with an "ability" that makes it so it can't attack or block. That sounds like a pretty poor ability to me, and Efrén agrees. To remedy this unfortunate situation, just play your Lignify on your Hydropon. Due to some crazy rule that somebody made up, you are not left with a 0/4 Treefolk with no abilities as expected, but rather a 0/4 Treefolk with no abilities and five +1/+1 counters! Your once combat-fearing "Wall of Hats" is now a 5/9 beatstick, ready to storm into battle (with appropriate headgear, presumably). You can pull off similar tricks with Ovinize and Cytoshape.

Not content to merely beat down with an otherwise neutral Plant Mutant, I took note of the fact that its combined power and toughness was ten, the same as Timber Protector. Add some Wild Pairs and your Hydropon can search out T.P. and, once you drop the Lignify, become an indestructible former Plant Mutant. That still wasn't enough.

I then added Treefolk Harbinger because it tutors for both Lignify and Timber Protector (as well as Rootgrapple, Breeding Pool, Dryad Arbor, or just plain old Forest). With a Wild Pair in play, the Harbinger's combined power and toughness of three lets you go looking for Yavimaya Dryad, Eternal Witness, Vedalken Mastermind (I smell synergy!), or Merfolk Thaumaturgist. The Merfolk acts as a blue Doran, in a way, since it can make your Timber Protectors deal 6 damage in combat and your Lignified Hydropons deal a whopping 9. You can also use it to wipe creatures off the board in conjunction with either Lignify or Ovinize. With Eternal Witness and Vedalken Mastermind on the board, you can keep doing this, turn after turn. You're a dead yew. You're a dead ewe. Have fun with homophones!

All Thematic for the People

Fiery JusticeWith the holidays just around the corner, I thought I'd give away a bunch of bonus decklists. Often at this time of year, Magic columnists (Anthony Alongi is the only one I can think of right now, but I'm sure there are others) will build some holiday theme decks. The theme might be something as simple as adhering to a strict red-white (See: Claus, Santa)
or red-green colour scheme.

Heck, you can include all three colours! Nothing says holiday spirit like some Fiery Justice. Well, it just so happens that the three decks that I turn to most often when I'm playing on my own time and my own money are a mono-red, a mono-white, and a mono-green deck. They're pretty normal and don't require a ton of explanation. The first is a Gauntlet of Power deck with a bunch four-for-a-ticket rares acting as finishers. Torchling is actually really good when it's a 6/6 and you have a million mana. The second deck is an all-commons White Weenie deck (which just got infinitely better with the addition of Goldmeadow Harrier and Oblivion Ring). The last deck is my favourite one to play, since it's full of exciting green cards. It's basically an updated version of the deck I sent JMS before he did Going Rogue 2. It can do a bit of everything, but mostly what it does is kill people with Squall Line.

Until next time, branch out into strange territory.

Thanks to everyone who sent me deck ideas, combos, or kind words this year. I couldn't have done it without you. See you in January!