ello everyone. Today I have the usual metagame breakdown for Standard and Extended, and then I'll say a few words about the Planar Chaos release events and build decks with the new avatars. Here is last week's Magic Online Premier Event Standard recap:

Well, that's a lot of Dralnu du Louvre. Every Top 8 this week had about 2 Dralnu du Louvre decks on average, so it seems that you either have to beat 'em or join 'em. Looking at the average popularity of the last month (perhaps a more reliable indicator due to the larger sample size), we see that the main decks to gun for are Dralnu du Louvre, Dragonstorm, Mono Green Aggro, U/G Scryb&Force, Angelfire, and U/W Tron. These decks always gain and lose some every week, but this healthy mix of aggro, combo, and control always remains near the top.

Newcomer U/B TrinketTog proves it has the tools to be a real contender in this format. Aggro Loam - after a week off - is dominating once again, and has kicked Boros Deck Wins down a bit. TEPS (one of the best decks at the start of the season) appears to be hated out; no one is playing it anymore. Looking at the average popularity of the last month (perhaps a more reliable indicator, as the above table is based on a small sample size of just one week), we see that the main decks to gun for are Boros Deck Wins, Aggro Loam, Affinity, U/B TrinketTog, Aggro-Flow/Rock, and U/W Gifts/Tron. If you want to prepare for upcoming tournaments, make sure you have a plan against these decks.

Planar Chaos Release events begin Thursday, March 1, and will last until Monday, March 12. Detailed information will be posted shortly here, but let me just quickly highlight the different kind of tournaments you can enter. 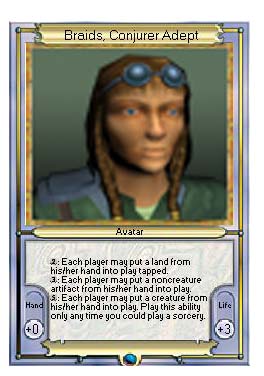 I had already mentioned the new avatars in my talk about prize support, but hadn't showed off their abilities yet. Time to do that now. On top of that, I'll try to build a Standard Vanguard deck that abuses those avatars. Note that the decks I will suggest are not yet well-tuned killer decks that will do well in a competitive tournament. I'm just having fun here and taking advantage of the avatar's abilities in an entertaining way.

That's a lot of abilities, so let's go over them one by one.

The first ability works as a mana accelerant (on turn three you can now have four lands in play), but your opponent will benefit from this just as much. Every deck plays lands after all. If we want to break this symmetrical effect, we should activate this ability of Braids when we do hold a land and our opponent doesn't. In order to make that happen frequently, we can either just play a lot of land in our deck, but the better way may be to play a lot of bounce lands (like Gruul Turf), in order to keep a steady mass of lands in our hand. Nonetheless, even if your opponent doesn't have a land in hand when you activate this ability, you are still paying two mana for an extra land drop, which isn't a great deal. So we may have to look further if we want to break this avatar.

The second ability is not really symmetrical anymore, as most people don't have noncreature artifacts in their decks, so you can get use out of it and your opponent probably won't. But there is a good reason why noncreature artifacts are not played often: there are almost no good ones available in Standard. Well, Signets are good, but it doesn't make a lot of sense to pay three mana to put a two-mana artifact in play. In order to gain something from the ability, we need to put an artifact with a mana cost of four or higher in play. The best ones I could find are Gauntlet of Power, Mirari, and Booby Trap. Howling Mine is also an option to keep in mind, as you can put it in play at the end of your opponent's turn, thereby you get to draw the first card with Howling Mine.

The third ability is mostly symmetrical (almost every deck plays creatures), but you can break it by playing expensive game-winning creatures, and by having a lot of them. Blazing Archon, Bogardan Hellkite, and others come to mind.

I tried to make a deck that could use all three abilities well, and ended up with this:

Note that this deck is just a casual fun deck, not a competitive one. I "broke" the first ability of Braids by playing 28 lands. That way, you should hold a land in hand more often than your opponent. I "broke" the second ability with Gauntlet of Power and Booby Trap. Gauntlet of Power should obviously go in a mono-color deck. Snow lands plus Scrying Sheets has traditionally been good in a mono-color deck, so that link was easily made. Coldsteel Heart rounds out the snow theme. The deck hopes to just deal 20 damage with Booby Traps; you even have Etheral Usher to fetch a second copy of the artifact. In order to name the right card, we have a playset of Mishra's Bauble and 1 Tunnel Vision that Ethereal Usher can search for. That way, we know the top card of our opponent's library and Booby Trap will happily deal 10 damage (for the low, low price of just three mana, courtesy of Braids). I "broke" the third ability of Braids with a steady stream of fatties: Grozoth fetches 4 Blazing Archon and a Nullstone Gargoyle, ensuring that you can get good use out of that third ability over the next few turns. Dichotomancy is put in as a Grozoth transmute target; and Niv-Mizzet, the Firemind is put in as an Ethereal Usher target for value. 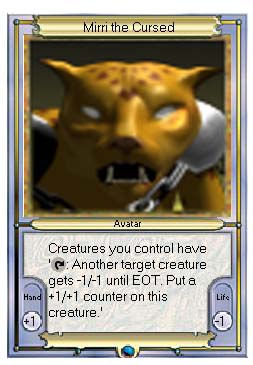 Starting hand size = 8
Starting life total = 19
Creatures you control have 'T: Another target creature gets -1/-1 until end of turn. Put a +1/+1 counter on this creature.'

Basically, every creature you control becomes a mini-Disciple of Tevesh Szat. There are many ways to approach a deck based on Mirri. The first thing that sprang to my mind was token creatures. Mirri can turn little puny creatures into role players, so cards like Vitu-Ghazi, the City Tree greatly rise in value. When your 1/1 Saprolings advance from mere chump blockers into pinging machines that grow in size, you have hit upon some good synergy. If you manage to build a large army of token creatures quickly, then Mirri allows you to take down any opposing critter. Dovescape also becomes increasingly amazing with Mirri as your avatar, as you can use your birds to shoot down your opponent's. The second thing that I came up with was to pair the activated ability granted by Mirri with Torchling, effectively turning every red mana you have into a -1/-1 effect at will, not to mention growing said Torchling into Dragon-worthy size. Another idea for a Mirri-based deck is the +1/+1 counter aspect. That activated ability looks even better on cards like Ulasht, the Hate Seed or Mindless Automaton, as they can use the granted +1/+1 counters for beneficial effects.

All things considered, I think the best way to build a Vanguard deck around this avatar is to build upon the token aspect. This is what I came up with:

4 Fists of Ironwood 4 Leyline of the Meek

4 Twilight Drover 4 Leyline of the Meek

We start the deck with Fists of Ironwood, Scatter the Seeds, Fertile Imagination, Selesnya Guildmage, Vitu-Ghazi, the City Tree, and Thelonite Hermit, hoping that these cards can give us a large army of tokens quickly, at which point we can start taking down every opposing creature in sight. Llanowar Elves and Birds of Paradise allow us to get our cards in play even more quickly. In the late game - when we don't need their mana anymore - they can start using the ability granted by Mirri.

Against creatureless decks, Mirri's ability may not seem useful (what are you going to target?), but it may still work somehow. Imagine the following (simplified) game situation: the only creatures in play are three 1/1 Saproling tokens on your side of the board, and neither player has cards in hand. Now, you could just attack for three, but you can also enlarge your creatures. Attack with Saproling A, then after combat tap Saproling B to give -1/-1 to Saproling A, then after that resolves tap Saproling C to give -1/-1 to the now 2/2 Saproling B. The end result after the turn ends is one dead Saproling and two 2/2 saprolings. Not exactly a game-breaking play yet, but it may come in handy.

The deck is rounded out with Leyline of the Meek and Twilight Drover. The latter is particularly good, since any +1/+1 counters it may gain from Mirri's ability can be turned into token creatures right away. You could expand on the token theme by adding cards like Doubling Season or Hour of Reckoning if you like, for extra fun. This deck looks like it should fare well against all the creature decks, but it may just scoop to a Wrath of God.