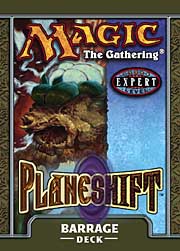 o win with the Barrage deck, pretend you're the Incredible Hulk after too much coffee: "Hulk mad! Hulk SMASH!" The idea is to deal 20 damage before your opponent knows what's going on. Barrage does this with cheap, fast creatures, and it uses Familiars to make your spells even cheaper.

You must play everything in your hand as quickly as you can, and attack at every oppotunity - even if it means losing creatures. Use your direct damage spells to get blockers out of the way. Don't be afraid to trade two cards for one if that's what it takes to press the attack. If you let yourself get into a stalemate, you'll probably lose!

Alpha Kavu, one of the deck's important cards, lets you get tricky during combat. Say your opponent blocks your Alpha Kavu with a 2/2 creature. Wait until combat damage goes on the stack, then make your guy a 1/3. Your Kavu will destroy the blocker and survive. You can also use its ability on the other eleven Kavu in the deck - or to neutralize your opponent's Kavu!

After your creature have gotten in some damage, think about turning the torch on your opponent. Sparkcaster is great for this, especially if you've got one or two Familiars in play. Each time Sparkcaster comes into play, it deals one damage to your opponent, and then you can choose to bounce it back to your hand. Think of it as a replayable Zap with a 5/3 creature built in. You can also return Thunderscape Battlemage or Flametongue Kavu to your hand when you play a Gating creature to get the most out of your creatures' comes-into-play abilities.

What happens if your opponent manages to stop your all-out attack and stall the game? You'll be in trouble. If you draw something that can catch your opponent off guard, wait patiently for the best opportunity to play it. If you don't think it's enough, wait for another one - a two card combo might be enough to turn the tide. 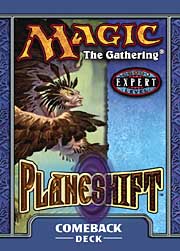 he Comeback deck uses Gating creatures to bewilder your opponents until its hordes of fliers can swarm them. With subtle card combination and color-changing surprises, this is definitely a thinking mage's deck.

To take full advantage of the gating mechanic, Comeback includes a lot of creatures with comes-into-play abilities. Here's an example of how they work together: Play Ravenous Rats. Its ability makes your opponent discard a card. Then play Cavern Harpy. When it comes into play, return the Rats to your hand. Play the Rats again... well you get the idea.

Some of the Comeback deck's nastiest tricks lie in its color-changing abilities. A number of its cards, such as Slay, Huntring Drake, and Galina's Knight, have color-specific effects. If you have Tidal Visionary or Sisay's Ingenuity in play, you can use these color-specific effects against any of your opponent's creatures.

Sawtooth Loon and Marsh Crocodile are gating creatures with additional comes-into-play abilities. Remember that because you control both comes-into-play abilities, and you decide the order in which they go on the stack. That means that when you play Marsh Crocodile, you'll never have to discard the creature you return to your hand (unless you want to). If your hand is empty, you won't be affected by the Croc's discard ability when you play and bounce it - but your opponent will.

Be on the lookout for hidden combos in Comeback. It's fun to see the shock on opponents' faces when they realize how the Cavern Harpy/Phyrexian Bloodstock/Tidal Visionary trick works. Even without the tricks, Cavery Harpy's bounce ability makes it practically indestructible. Remember that you can wait for the Harpy's combat damage to go on the stack before returning it to your hand. 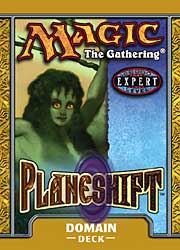 five-color deck without any one land that can produce multiple colors? A deck that's over half lands and land-fetching effects? Can a deck like that work? It can, and the Domain deck is a blast to play!

Because all the "domain" cards depend on how many basic land types you have in play, this deck focuses on getting at least one of each basic land into play. The best color for solving mana problems is green, so the deck contains more forests than any other basic land. Quirion Trailblazer, Primal Growth, and Harrow are all important for getting basic lands into play. You'll find that playing Harrow can often mean the difference between winning and losing.

Once you have all five basic land types in play, the fun begins. You'll probably take some damage early in the game, but the Domain deck contains some cards to help you recover. Wandering Stream will often gain you eight or ten life, and Exotic Disease can close the gap between your life total and your opponent's. At just 1R, Tribal Flames could deal 5 damage to an annoying creature (or your opponent). The star of the domain show is Allied Strategies. For just 4U, you could draw five cards! Your creatures certainly aren't slouches, either. Once all five basic lands are in order, Wayfaring Giant hits the table at 6/8, and Stratadon is a menacing 5/5 for five mana.

Domain includes a few cards that aren't true domain cards, but they work well in the deck. The "dragon charms" are great utility spells. Between Rith's Charm and Treva's Charm, you can solve almost any problem you'll face. Magnigoth Treefolk is a big, unblockable creature that begs to be enchanted with Strength of Unity. Quirion Dryad can grow to huge proportions over the course of the game.

To improve the deck, you could take out some creatures and add more Tribal Flames and other creature-control spells. If you're fond of playing creatures, take out some of the catch-up spells and replace them with the best creatures in any color. 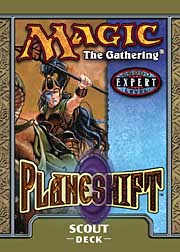 cout is a creature deck packed with surprises. It's not the fastest deck you'll ever play, but once you set up, you'll be hard to beat. Scout includes six Battlemages - when you pay their kicker costs, they become utility spells and creatures wrapped into one. Since the deck has so many versatile spells, you'll usually have the answers to problems your opponents try to make for you.

The Scout deck is primarily green to take advantage of the best mana-fixing cards. Red provides a touch of creature removal, and white tricks can really surprise your opponent. Running three colors allows Scout to include some really powerful multicolored spells, including Fleetfoot Panther and Rith's Charm.

Your top priority should be to have access to your three colors. After your mana is in place, you'll have lots of decisions to make. Should you play your Battlemages right away so you can apply some beatdown, or should you wait so you can pay their kicker costs? The answer depends on the game situation. If you're getting hammered by enemy creatures, you might need to play your Battlemages just to survive. In general, the best choice is to wait as long as possible. However, if you draw any Gating creatures, go ahead and play a Battlemage or two - you can always use the gating creature to return a Battlemage to your hand.

You should save your few direct-damage spells for creatures that could really ruin your day. Or try to fool your opponent into thinking his or her creatures will come out on top in combat, then use the red spells to turn the tables. Pollen Remedy and Gerrard's Command can also radically change the outcome of combat.