ince we returned to Ravnica we have been running the Guild vs. Guild leaderboard on PlaneswalkerPoints.com. More than 100,000 players chose their guild and competed to push their guild to the top of the leaderboards.

Today, that race ends and we have a winner. Despite the Izzet League taking an early lead with their wild machinations and crazy magical inventions, it was the supremely organized and dedicated Azorius Senate who rose to the top and defeated all nine of Ravnica's other guilds. 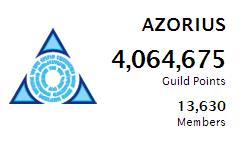 Here is the final standings for the leaderboard. (Note: The numbers may slightly vary from PlaneswalkerPoints.com due to the delay between scores finalizing and when I wrote this. However there are no positions near enough that these final tabulations could change the outcome.)