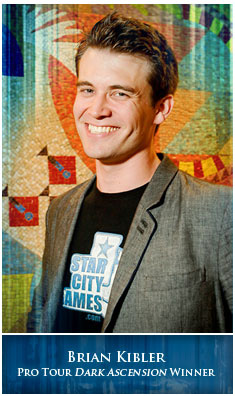 Where do you live?
San Diego, CA

How long have you played Magic?
Going on nineteen years now.

What is the first set you remember from Magic?
The first pack I ever opened had a Mox Jet.

How did you learn to play Magic, or who taught you?
I learned to play from the Unlimited rulebook with my brother and friends from school. It took us a long time to actually get things right.

How long have you played Magic Online?
I've been playing since the beginning of the beta, when every account was given a card name or part of a card name. My beta account was Kird. Kai Budde got Spiritmonger. I felt like that was a bit unfair.

Do you stream? If so, what's your channel URL? www.twitch.tv/bmkibler

How often do you draft on Magic Online?
A lot of Cube is online or Limited tournaments are coming up—otherwise maybe once a week.

How often do you play Constructed on Magic Online?
Pretty much every day. I mostly just test out ideas in the two-person queues, and I record videos of Daily Events once a week.

Do you play any casual formats on Magic Online?
If Cube counts as casual, I play lots of Cube when it's online.

Have you tried the Wide Beta client?
I have.

What's your favorite change that has been made?
Drafting is much smoother—I like having the cards I've hidden automatically go into my sideboard so I can build my deck as I go. I also really like automatically sorting decks by format legality, so I don't have to worry about loading the wrong deck for an event.

Favorite formats to play on Magic Online:
Cube and Standard

What do you think of Return to Ravnica?
It's a blast—I think both Standard and RTR draft are great right now.

Did you play during the original Ravnica?
Very little—it was during one of my extended breaks from Magic.

Favorite guild to draft in Return to Ravnica?
Selesnya. Populate all the things!

If you were to get a Magic tattoo (or already have one) what would it be?
It would have to be some kind of dragon. Keep making awesome dragons, and maybe I'll decide one of them is awesome enough to permanently ink on my body one day.

If you could play Magic against anyone, who would it be and why?
Bobby Fischer. I'm curious how strategic insights carry over from one game to another.

If you could play Magic Online against any villain AI from the movies, which would it be?
Data from Star Trek: The Next Generation.