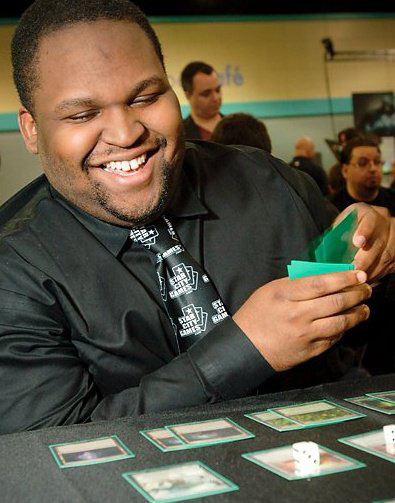 Occupation:
Founder of The Stream Team, full-time SCGLive broadcaster, NBA addict, and happy to be your source of entertainment. =)

Where do you live?
Seattle, WA

How long have you played Magic?
14+ years

What is the first set you remember from Magic?
Ice Age. Woolly Mammoths ftw!

How did you learn to play Magic, or who taught you?
My best friend in elementary school, John Cross, taught me how to play on the bus. We originally became friends because I couldn't beat Sigma's Dog in Megaman X and I caught wind that he could. Then he showed me what a Polar Kraken was…

How long have you played Magic Online?
8+ years.

Do you stream? If so, what's your channel URL?
www.twitch.tv/ceddyp

How often do you draft on Magic Online?
If a Limited event is coming up, four or five times a day for two to three weeks until the event begins.

How often do you play Constructed on Magic Online?
If a Constructed event is coming up, five to eight hours a day for two to three weeks until the event begins.

Do you play any casual formats on Magic Online?
Nah. I'm too competitive and don't know how to turn it off.

Have you tried the Wide Beta client?
Some. I've mostly watched Michael Jacob play on it via his stream.

What's your favorite change that has been made?
Honestly, not a ton of things have been made that much better. =(

What are you looking for us to do on it that we haven't done yet?
Leagues were something that people loved with the old client. I also like checking ratings of my opponent and having clan affiliation mean something.

Favorite piece of Magic art:
Currently, I really like the new Syncopate artwork a lot

What do you think of Return to Ravnica?
I like the idea of going back to Ravnica but I have fond memories of how things used to be back in my college days, and it would be impossible for anything to come that close again in my opinion.

Did you play during the original Ravnica?
Far too much.

Favorite guild to draft in Return to Ravnica?
Rakdos.

If you were to get a Magic tattoo (or already have one) what would it be?
The full artwork of Cloudgoat Ranger ON MY BACK.

If you could play Magic against anyone, who would it be and why?
Gabe Walls, because he is impossible to read and is a ton of fun to play against.