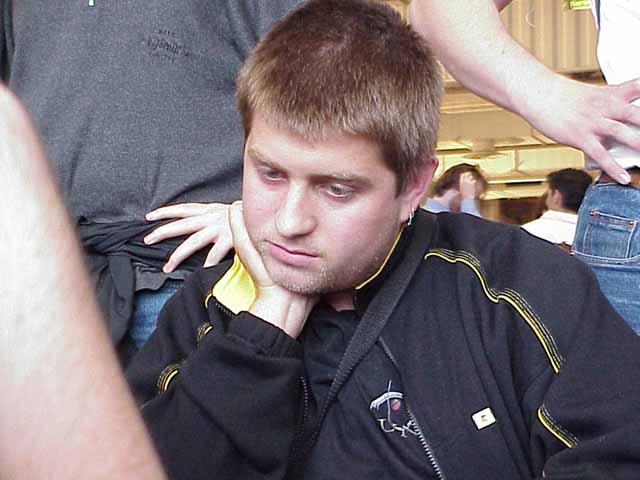 "My friends had a lot of special rules that we used to balance the game. We thought that Fireball would be too strong if it could target players, so we made it target creatures only."

"There weren't really any experienced players in the Czech Republic, but I did learn a lot from the members of my playtest team: Ondrej Baudys, David Korejtko, Lukas Ladra."

"My favorite format used to be Extended, but I don't enjoy it any more because of the new combo decks. In Booster Draft, there's always something new that you haven't seen. Also, it's fun to play with cards that aren't good enough for Standard."

"My favorite deck was Four Color Black, which I used to win the World Championship in 1997. I got to play with Man-o-Wars, Incinerate, Orangutangs, and lots of other good stuff. The deck was very versatile and a lot of fun to play with.

"Svend Geertsen. I'm so glad he's back here. He's a really nice guy, and I've played against him a number of times."

"Must be Jon Finkel. I've never seen such consistency."

"Lightning Bolt. It's cheap, it's a great removal spell, and it does three damage for one red mana. Come on guys, reprint it!"

"Flying. It's hard to block when you've got flyers!"

"Sigurd Eskeland winning PT New York. He worked really hard and he really deserved his victory. And he hadn't made a top 8 before as far as I can remember."

"It was really cool to see my deck immortalized in the special edition World Championships decks."

"Rio de Janeiro. It was the first Duelist Invitational that I was invited to. The city was great and the people were very cool. The weather was terrible, though. It was probably hotter than 44 degrees Celsius.

"I'm not a person to build decks; I'm more a person who tinkers with them. I worked on the Rising Waters deck and of course the black control deck I used at 1999 Worlds.

"Kai Budde said his greatest accomplishment was being World Champion. I guess that works for me as well."

"I play two or three times a week, two or three hours at a time. Also, each week I usually play in one Draft or Standard tournament.

"I playtest with Team Mogg Squad."

"The introduction of the Pro Tour made the game more professional. It's always good to give people something to strive for: either pride, or money."

"I'm a fast and intuitive player. I don't count or do the math; I make decisions just because it 'feel's right.' A lot of times, it works."