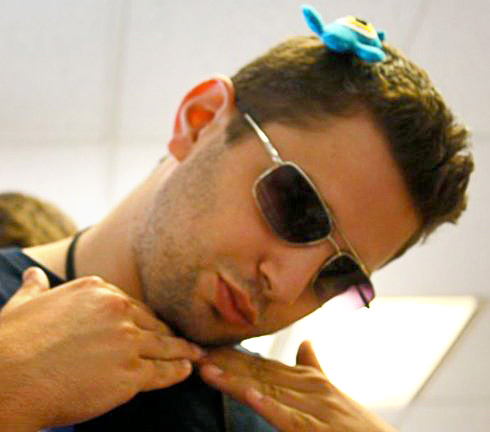 Where do you live?
Victoria, BC, Canada

How long have you played Magic?
I played Magic 1994–1997 in my last couple years of elementary school with my next-door neighbour (yah, that's one of the words we like to stick "u"s into). Once I reached high school,Magic was replaced with D&D and I didn't pick it back up until PAX 2010, when those clever folks at Wizards of the Coast put those demo decks in every swag bag. I've been playing ever since.

How did you learn to play Magic, or who taught you?
To be honest I don't think I truly learned how to play until I picked it up again in 2010. It has been a topic of conversation between my friends and I that what we were doing as kids was more collecting and jamming as many cards into "decks" as we could.:) But I suppose the fundamentals of the game were learned on the playground with my grade-school friends.

How long have you played Magic Online?
I started with Magic Online in early 2011. However, it wasn't until later last year (about the time of Innistrad), that I really invested much time into it.

Do you stream? If so, what's your channel URL? Myself and Graham (co-founder of LoadingReadyRun) stream every Thursday night on our twitch channel: twitch.tv/loadingreadyrun

How often do you draft on Magic Online?
Anywhere between once a week (generally weeks I'm busy with the site or traveling) and five to seven times a week (HELLO CHRISTMAS BREAK).

Do you play any casual formats on Magic Online?
Other than a random match of Momir between rounds of a draft, no. But I've been meaning to put together a Commander deck for Magic Online. Perhaps a holiday mission for myself.

Have you tried the wide beta client?
Indeed I have.

What's your favorite change that has been made?
Overall, the look has greatly improved and I'm a big fan of deck building while drafting.

What are you looking for us to do on it that we haven't done yet?
My two biggest wishes for the Magic Online client is to make use of some of the empty space that dominates certain areas of the client and to change the way your mana taps as to stop it from shifting when you do so. In terms of big picture stuff? I think a lot could go into making the trading aspect much more user friendly, and while I know this is a long way down the road I'm really interested in the idea of subscription-based Magic.

Favorite Magic Card:
From a nostalgic point of view I will always have a soft spot for Force of Nature. It was the first big beefy creature I ever saw and it blew my eleven-year-old mind. In today's world, I'm a big fan of Lingering Souls.

Favorite piece of Magic art:
For the LOL factor, Elephant Ambush. However I think my favorite card art is the FNM promo of Despise. I'm a fan of Raymond Swanland's work, but this card has always stood out more than the others. He was at the Vancouver PTQ this year but I was either too late or he didn't have any left, but I really need to get a print of this for my office.

Favorite Planeswalker card:
It's a tie between the new Sorin, Lord of Innistrad or Karn Liberated. I'm a big fan of tokens (as you might have been able to tell from the mention of Lingering Souls above) and throwing out an emblem the turn Sorin comes down to pump them up is lots of fun. Karn Liberated, however interacts with the game in such amazing ways, especially when you get his ultimate off.

What do you think of Return to Ravnica?
Well for me it isn't a return, as I wasn't around when the original block came out. But after seeing the excitement reach pretty crazy levels when the set was announced I was pretty stoked to see what this Ravnica place was like. Needless to say, I haven't been disappointed. The Limited format has been lots of fun and it's brought new life to Standard, which I'm a pretty big fan of.

Did you play during the original Ravnica?
I did not.

Favorite guild to draft in Return to Ravnica?
Either Rakdos or Selesnya.

If you were to get a Magic tattoo (or already have one) what would it be?
In the form of a lower back tattoo (we all know what they're called) I'd get, complete with the weird markings over the "ter," a Deckmaster tattoo.

If you could play Magic against anyone, who would it be and why?
This is one of those questions that could go either way. I could throw out some famous people from history and be done with it, but to be honest getting the chance to sit down with someone like LSV, Conley Woods, Brian Kibler, or Jon Finkel would be a pretty incredible experience. I play Magic because I love the game, and by far my favorite part is introducing new people to the game and watching them grow as players. I don't have the drive or really the desire to play in a Pro Tour one day, but that doesn't mean I don't want to improve the way I play, and to have the chance to hang out with one of the greats for an afternoon and pick their brains and play some Magic would be a pretty cool experience.

If you could play Magic Online against any villain AI from the movies, which would it be?
Agent Smith. Hugo Weaving seems like a pretty cool dude.