Julien Goron is not exactly one of these players you would describe as a wizard in the Magic jargon. He started playing Magic a few years after most of the other French Pros, making his way on the Magic scene pretty slowly. Everyone knows him for a while in France, but who would have bet he would turn into the player he finally became? The story began in Columbus, at the opening of the ’05 season, where Julien finished in Top 32, but the PT newcomer's performance was eclipsed by Pierre Canali's one. However, as he managed to cumulate prize money awards by performing in many PTs, people started noticing him. He was also crowned French National Champion last summer.

Interviewing Julien came up as a logical follow up of the awesome results he posted lately, with a second place finish behind Pierre Canali at the Rookie of the Year Race 2005, and a very robust start for the 2006 season. Indeed, two GP Finals (Dortmund and Hasselt), followed by a prize money finish in Honolulu (41st), put Julien in a comfortable situation as he's currently 5th in the Pro Player Race.

As he didn't make day two in GP Cardiff, Julien is team drafting on Sunday evening. He let his teammates start playing without him and kindly takes the time to answer my questions. 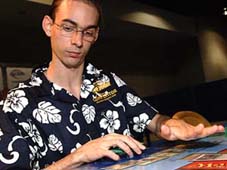 Hi Julien, can you introduce yourself to the readers?
Sure. My name is Julien Goron, I'm 23 years old and work as a postman in Paris, France.

After your two straight GP finals and your recent good results in limited, you appear as an outsider for PT Prague, don't you think?
It will be difficult to post a decent performance again, but my goal is to reach a PT Sunday once in the year - as there aren't that many PTs left, I'll do my best.

Do you feel like you’re getting more skilled lately?
I was actually considering myself as a good player, but so many people would tell me about mistakes they see me making that I'm not too sure anymore.. I feel comfortable while playing, but I'm still doing many errors, particularly when under pressure. It might be why I lost my two finals...

About Prague, what do you think about the format?
Hmm... won't be easy for anyone, people will have to find a way to get Dissension packs and then to find people to test with. Some players will definitely take advantage from the situation.

Including you?
I believe so; at least I'll make sure to prepare myself as well as possible.

And what will be your preparation be like?
I'll play the Dissension prerelease, then I'll keep the packs I’ll win there and try to find at least 5 other players to draft with regularly.

Let's move to the fast questions Tatata lalala tata poinpoin...
What was that?

Rare?
Let me think about it: not Glare, there can always be a solution. Not Hex, I'm not a huge fan of it, so Flame Fusillade I guess.

Most overrated card in the format?
Bouncelands

Underrated?
Can't think of any. Not that long ago, I would have said Vedalken Dismisser, but now it would better fit in the overrated category. Only few weeks ago, you could still receive it 7th or 8th pick, it was kind of ridiculous, but now people tend to 1st or 2nd pick it, which is simply too high.

Who will win PT Prague?
I'd say a Dutch, since I'm not sure Japanese players are as scary in limited as they are in constructed. But there are just so many good Dutch Pros that I can picture one of them winning.

Who else will be in the top 8?
After only one year on the train, I’m afraid I don't know players well enough to make an opinion, unfortunately.

A little jump about Magic to discover a little more Jul...
(he cuts:) Don't tell me you're gonna ask me for my favorite books or band please, I don't even listen to music.

No no, don't worry...favorite movie?
The Postman, starring Kevin Costner. I can say that if I had not watched this movie, I might not be what & who I am now.

Book?
…Too much information for the readers!

OK Julien. What are your hobbies then?
I'm a true Otaku, I love mangas!

Which is your favorite?
Hikaru no Go

(he interrupts:) oh I know, ask me again your question, what was it, « favorite artist? » Hmm sure, favorite artist?
(To Bernardo Da Costa Cabral, who is passing by:) Bernardo, who's your favorite singer? I need a good answer that would make me look cool
Bernardo: Morcheeba I'd say
Julien: Unbelievable, just like me!

Back to Magic, and jump to the conclusion Mr Goron, what are your goals for 2006?
I'd love to make a first PT Top 8, and then if I can, maybe I'll try to get my Level 5. Yes, Level 5 would be my ultimate objective.

Do you have plans for Prague?
Absolutely. I'll probably stay one week with friends after the PT. I cannot even imagine going to Prague without taking the chance to do some sight seeing, it looks so nice.

Thanks a lot Julien!

Next week I'll welcome in these pages four players, as I wanted to interview one Dutch but it turned out to be too hard to select only one.
Meet the Dutch Powerhouse on next Tuesday!