For my player’s profiles section, I definitely wanted a Dutch, the only problem was to find the one. Not that there are not enough of them, I wish... but there are just numerous Pros posting solid results in the Windmill country.
Which one should I go for? The almost ’05 World Champion Frank Karsten, the ’04 Rookie of the Year and World Champion Julien Nuijten? The very consistent (for years!) Kamiel Cornelissen and Jelger Wiegersma? Or maybe one of the rising stars, such as Roel van Heeswijk or Rogier Maaten…
I finally decided to interview Jelger, Julien, Rogier and Frank, as I could hardly select only one and as I was seating at their table in the only restaurant still open in the neighborhood at the time day one of GP Cardiff ended.

Hi guys, let’s start with a fast introduction to the readers. Can you tell me where you’re coming from, what you’re doing for a living or what you’re studying, and how old you are?
Frank Karsten: I’m 21 and I’m a student in Industrial Engineering & Management Science in Eindhoven.
Rogier Maaten: I’m 22 years old, from Tillburg, and I study Econometrics.
Jelger Wiegersma: I’m a Magic pro, I’m 24 and I live in Eindhoven.
Julien Nuijten: I’m 17, and I’m still going to school in Amsterdam.

For years now, results from Dutch players on the PT have been extremely consistent. How can you explain so many of you do well and so regularly?
Frank: We live in a small country, so close from each other; it’s really easy to go to Amsterdam or Utrecht where Roel (van Heeswijk) and Bram (Snepvangers) live.
Julien: Indeed we can always get together; it’s easy to gather at least 6 people and play test.
Rogier: Holland isn’t that big, so we can go anywhere and play test in an hour.

The Netherlands bring us a new Pro every year. Roel, before him Rogier, and the year before Julien, how do you explain this constant renewal?
Julien: Shortly after Von Dutch (Remie, Wiegersma, Cornelissen) won a team PT (Seattle, summer ’04), I won Worlds (San Francisco, September ’04), it motivated people to play more, and maybe it made them more confident too. The same will happen if your country wins the World Cup, the next day, thousands and thousands of people will start playing soccer and a few years later, it will bring a brand new generation. 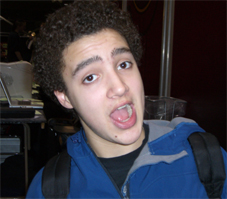 And the next one to make his first PT Top 8?
Jelger & Julien: Rogier
Frank: Not even close
Rogier: Wessel Oomens on Team PT in Charleston

Isn’t he teaming up with you?
Rogier: Yep, and Julien too.

The four of you have been nominated for the Invitational, but only two of you made it (Julien and Frank). It will be your first Invitational, Frank, are you excited?
Frank: I’m looking forward to go; it seems a lot of fun. 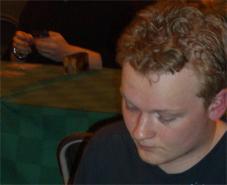 What about you Julien?
Julien: A lot! It was so great last year.

Any idea about the card you’ll submit?
Frank: Some fatty boom-boom, a two mana 7/7 with no draw back would be nice.
Julien: A two mana 2/1 (unfortunately, I can’t read my notes nor remember what it does).

How do you guys feel about it? You’ve both been nominated three times.
Jelger: It’s ok, it’s not that frustrating.
Rogier: I’d just like to play it once, I can live with it if it’s not for this year.

Enough Magic for now, we’ll talk about Prague later, but let’s try to learn a little bit more about the men behind the players. What is your favorite movie?
Julien: Hmm... must be Honey or Crossroads, close
Rogier: Titanic... Not lying, I’ve seen it probably 20 times!
Frank (nearly smothering with his pizza): Fear and Loathing in Las Vegas
Jelger: Shrek.
Frank: Shrek?
Guy next table (to his wife): He said Shrek!

Guy next table: Are you guys here for Rugby?
Kind of Followed by a 5-minute not so interesting discussion about soccer and about “Magic? What kind of game is it?”. Unfortunately, Ian and his wife had to go as they had finished their dinner.
Ian (you certainly don’t care that much but the guy’s name was Ian): Enjoy!

We will! Gone? How would we enjoy? It’s been raining non stop since we arrived... So, where were we? Oh yeah, any favorite book?
Jelger: Catch 22 by Joseph Heller.
Frank: It’s been a while since I didn’t read a book, but I like Fantasy in general.
Favorite Video Game?
Rogier: I don’t play Video Games.
Julien: Pro Evolution Soccer (a.k.a. Winning Eleven).
Frank: Zelda on Super Nintendo.
Jelger: Zelda too, but on Game Boy.

Thanks, let’s go back to Magic. We talked about the Invitational, but less than a week before you’ll all be in Prague for the Ravnica-Guildpact-Dissension PT. About the new format, would you say it’s good or bad news?
Julien: I don’t think it’s such a good idea.

What do you mean? You were talking earlier on about how easy it was for Dutch players to test together.
Julien: It’s good for me, as I’ll be on holidays on the week before Prague, but it’s unfair for people who’ll be busy because of work, for instance.
Rogier: WotC have to counter the Magic: Online effect, but they could have let us one more week.
Jelger: Personally, I love the brand new set format, it’s good that not everyone can do 100 drafts on Magic: Online.
Frank: It will be a really skill intensive format, and a huge advantage for good players. As I never play Modo it definitely helps.
Rogier: I guess... 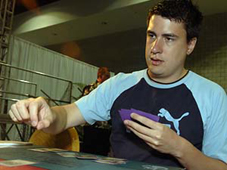 Now I want a collective answer, give me the list of the players in the Top 8.
Dutches: Finkel, Kaji, Sadeghpour, Da Costa Cabral, Shimura, Jelger, Chambers and one from the testing group.

Can you tell us about your testing group and method?
Julien: One week before the PT, Bernardo (Da Costa Cabral), Swap (Siron), Wessel (Oomens), Roel, Frank, Rogier, you and Antoine (Ruel) are coming to my place, where we will have intensive drafting for a week. I’m still waiting for answers from Masashi (Oiso), Kenji (Tsumura), Gab (Nassif) and Jelgie.
Rogier: I’ll come right after my holidays

Where are you going?
Rogier: To Turkey, I’m gonna lay on the beach. 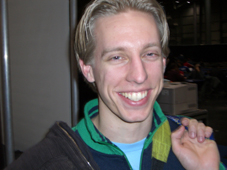 All right guys, anyone wants to conclude?
Julien: Must be nice to be José B. That’s all I’ve got to say.

Anyone has a better conclusion?
Frank: Optimality is the best of all virtues!

(To be very honest, I’m not 100% sure about what Frank meant here – but he gave some thoughts before coming up with this answer. If you are interested in figuring out what he was having in mind, I would recommend you ask him directly)

Thanks a lot and good luck in Prague!