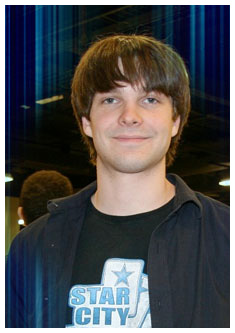 Where do you live?
Sugar Loaf, NY

How did you learn to play Magic, or who taught you?
I started playing Magic in 1995, when I was five years old. My mother brought home two starter decks—Fourth Edition for me and Ice Age for my brother, Ian. We basically taught ourselves to play, but it was a little rocky at first. By our rules, Zephyr Falcon was pretty overpowered, because Ian would attack me with it twenty times in the same turn! There was also endless confusion from the expression "First Strike Counts as a Wall" on the Fourth Edition Wall of Spears.

I remember the release of Alliances, and I guess that was when we really started to get the rules down and found some other people to play the game with.

How long have you played Magic Online?
I started playing my freshman year of college, in 2007 or 2008.

How often do you draft on Magic Online?
Three or four times a day when I'm preparing for a tournament. One or two times a week when I'm not.

How often do you play Constructed on Magic Online?
It's my main way to prepare for tournaments. Six hours or more, three or four times a week (unless my next tournament is Limited).

What do you think of Return to Ravnica?
Loved it.

Did you play during the original Ravnica?
Yes, casually.

Favorite guild to draft in Return to Ravnica?
Rakdos.

If you were to get a Magic tattoo (or already have one) what would it be?
The cat from Natural Order.

If you could play Magic Online against any villain AI from the movies, which would it be? (Ex: Hal 9000, David from Wargames, The Queen Borg from Star Trek, IG-88, etc...)
Hal 9000. "What are you doing with that Lightning Bolt, Reid?"